Obama, Newsom and other Election Winners and Losers 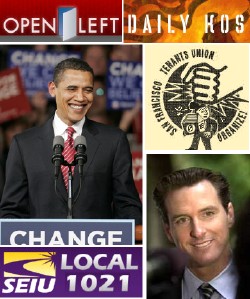 The people of the United States and the entire world were the big winners this week, with Barack Obama’s victory being compared to the first man on the moon and the ending of slavery. My daughter teaches at a middle school in the Bedford-Stuyvesant neighborhood of Brooklyn, and on the morning after the election the teary-eyed principal played Obama’s victory speech while the students–all of color–chanted “Yes We Can.” Similar inspiring scenes are occurring across the country, as the sense of a new beginning is palpable. But there were also losers this week, and topping the list is the Republican Party and its media allies. Also high on this list is gay marriage advocates and their champion, San Francisco Mayor Gavin Newsom, whose gubernatorial ambitions took a major hit with Prop 8’s victory. Here is an analysis of why some of my election predictions failed, as well as my list of the top five winners and losers for November 2008.

Nationally, I correctly predicted the Obama Electoral College landslide, particularly his victories in Ohio and Florida. I also got most of the Senate races right, though I did think that Al Franken would win a tight race in Minnesota (he is narrowly trailing pending a recount.) Nate Silver of http://www.fivethirtyeight.com/ said that Alaska Senator Ted Stevens had a 100% chance of losing, so I was not alone in perhaps wrongly predicting his defeat (absentee votes could still sway the outcome.) I’m told Jeff Merkley will ultimately win Oregon’s Senate race, so put that in the correct column.

In California, I thought that Prop 8 would perform similarly to Prop 4, the anti-abortion initiative. My assumption about Prop 4 losing narrowly was correct; for why I missed on Prop 8, see Paul Hogarth’s piece at https://beyondchron.org/news/index.php?itemid=6262

In San Francisco, few joined me in predicting a possible Bobbi Lopez School Board victory, though I had her competing for the fourth spot rather than finishing third. Although the results are not final, I appear to have got the Supervisor races in Districts 1, 3 and 9 right, and while John Avalos will likely win in District 11, I was not off base in finding that ranked-choice voting among the multi-candidate field made it too close to call.

My biggest error was predicting that Prop B, the affordable housing set-aside, would prevail. Frankly, I am shocked that, while absentee ballots remain to be counted, it appears to have lost. I attribute its narrow defeat to two factors.

First, presidential year turnouts bring out a lot of voters who do not really know local issues and are more susceptible to deceptive mail campaigns of the type waged at the last minute by the No on B campaign.

Second, the San Francisco Chronicle chose Election Day to run a front-page headline story on the Controller’s announcement that the city’s budget deficit would be greater than anticipated.

Maybe that story appeared just by chance. Or maybe the Controller’s statement was timed to reduce support for Prop B, and the Chronicle, which editorialized against the measure, did their part by putting in on the front page rather than the less noticed Bay Area section.

I had long thought that the city’s budget crisis made Prop B unwinnable, but voters appeared to strongly support affordable housing and by mid-October it appeared headed for an easy victory. But the state and national economic crisis could have made voters more wary of new spending mandates, which caused the measure’s unexpected defeat.

I was also wrong about Prop L, the Community Justice Center, but its proponents failed to mount a campaign and it was largely off voter’s radar screen.

At every stage of this long political season, the information on Internet sites like Daily Kos, the Huffington Post, and Open Left was vastly more accurate and informative than what was being delivered on CNN and other traditional media outlets.

During the past year I have repeatedly described false media narratives designed to weaken Barack Obama, ranging from his alleged inability to win white blue-collar voters to his “problem” with Hillary backers. Those relying on the traditional media exclusively had far greater doubts about Obama’s ability to win either the nomination or the general election, while on-line readers remained upbeat and encouraged because they knew the real facts.

It is not a coincidence that progressive politics has advanced in the United States as voters increasingly seek their news from the Internet rather than being limited to the traditional media. And this trend is likely to continue.

And before we leave the Internet, let’s give a lifetime achievement award to Howard Dean, whose online fundraising prowess in 2004 created the model for Obama’s unprecedented online money haul (and whose 50-state strategy helped Obama change the electoral map).

The next President of the United States is an African-American former community organizer whose most formative experience occurred with blue-collar workers on the South Side of Chicago whose jobs had been outsourced and whose economic opportunities curtailed. He ran on a platform that emphasized putting America back to work, investing in rebuilding our infrastructure and creating well-paid jobs, providing universal health care, seriously challenging global warming, raising taxes on the wealthy, increasing funding for secondary school education and making college more affordable, and of ending the war in Iraq.

And pundits want us to believe that electing Barack Obama was not a progressive victory?

Sarah Palin told a nationwide audience during her Republican Convention speech that community organizers did not have any responsibilities. Organizers responded to Palin’s insult by mounting a ground game that gave Obama an Electoral College landslide, and that turned such longtime “red” states like Indiana, Virginia and North Carolina blue. This ground game, combined with the McCain-Palin’s misguided and vicious attacks on ACORN, showed that most Americans like community organizers, and that organizers have a better sense of people’s needs than small-town Alaska mayors.

If current results hold, the labor-tenant alliance that combated downtown and real estate interests in Districts 1, 3, and 11 will have won a total victory. The heavily labor-backed Prop A (SF General Bond) and the tenant anti-harassment measure (Prop M) also won easily. Many of us have long argued that union members and tenants are natural allies, and this election again showed the potency of this alliance.

The picture of legendary Freedom Rider and current Congressman John Lewis crying on election night said it all. The election of the nation’s first African-American is something that Lewis and others of his generation never thought they would see in their lifetimes–and its impact on the nation’s African-American population is incalculable.

The media ignored Latinos this election season to such an extent that MSNBC’s “progressive” team includes no Latinos while CNN’s “Best Political Team” has no Latino Democrat. This overlooking of one of the election’s most critical voter trends continued through election night, as relatively little attention was paid to the huge Latino Democratic votes in New Mexico, Colorado and Nevada.

I did not hear many experts credit Latinos for ensuring all three states went far more heavily for Obama than anticipated. Nor did non-Cuban Latinos get any credit for helping to swing Florida to Obama.

Barack Obama knows how Latinos helped his election, which is why comprehensive immigration reform will be enacted next year.

They’ll keep peddling how Obama’s victory somehow says we are a “center-right” nation, but fewer and fewer people–and hardly any under 30–are paying attention

After the Supreme Court upheld gay marriage, I was among those who felt that the ruling gave Newsom a loyal activist base across the state that could propel him to win the Democratic nomination and then the Governor’s office. But the Yes on 8 campaign’s use of Newsom’s post-court ruling press conference–an event that no media questioned at the time and for which Newsom has nothing to apologize for–suddenly led the No on 8 campaign to deem the mayor politically radioactive around the state.

Newsom aggressively campaigned against Prop 8, but his presence was limited to sympathetic audiences. What does this say about his ability to campaign among Yes on 8 Democrats in the 2010 primary, or to win the support of Yes on 8 voters in the general election?

The gay marriage issue has been Newsom’s chief entry point among progressive voters, and he will retain the loyal statewide support of those for whom gay marriage is a top priority. Ideally, Newsom would have toured the Central Valley and other moderate areas and won over voters to the No on 8 side; the fact that this did not occur, even if by the campaign’s directive rather than Newsom’s choice, raises questions about his path to victory in 2010.

As in 2004, these forces spent heavily on Supes races and are likely to get nothing to show for it. They helped defeat Prop B, but all that does is make them look like pro-gentrification forces who are doing nothing to stem the flow of middle-class families from the city.

This is the second straight national election in which anti-immigrant Republicans lost and pro-legalization Democrats in Colorado, New Mexico and other states prevailed. CNN gives Dobbs and his allies hours each day to spew their hate, but voters are rejecting their message. Republicans were convinced that the massive crowds in the 2006 immigration marches would not translate into Democratic votes–and this week again proved them wrong.