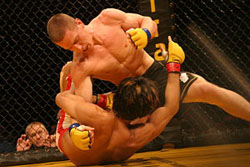 As only nervous Barack Obama supporters can do, Sam Stein of The Huffington Post worries out loud about the implications of John McCain’s appearance – replete with lowbrow images of underdressed females in a swarm of military veterans – at the annual motorcylists’ rally in Sturgis, South Dakota. Will McCain make a successful pitch for the voter bloc loosely defined as the NASCAR-cum-pro-wrestling crowd?

Relax. What Obama needs to do in response to McCain’s rather desperate effort to emulate George H.W. Bush’s professed fondness for pork rinds and aversion to broccoli can be summarized in one word: nothing.

In one of the most delicious ironies of this presidential season, it is the experienced but fatally recorded McCain who has the most work to do shoring up his base. The verbally gifted Obama, whose brief tenure on the national stage has left few policy footprints and hence made fewer enemies, can stay above the fray. A politician who wasn’t even in the Senate when President George W. Bush was authorized to use force in Iraq stands to be the bigger beneficiary of the Rashomon Effect in that area, or any other.

And the truth is that McCain has his own, deep, problem, with the “wrestling vote.” During the primaries, the religious right voiced misgivings about McCain’s allegiance on litmus-test issues for good reason – he has an independent streak that he will be spending the entire general election campaign seeking to mute on every question except the war.

McCain also is weighed down like an anvil by his instinct to embrace the historically least attractive trait of Whig/Republicanism: a finger-wagging, moralistic streak that is utterly dissonant with the debauchery of a bikers’ convention.

Finally, there’s the little matter of rehabilitation. In the 1990s, just as the phenomenon of mixed martial arts (MMA) was starting to get legs, McCain was the highest-profile elected official in the U.S. seeking to ban the new sport, which he labeled “human cockfighting.” MMA, which is frighteningly real, has nothing to do with pro wrestling, which is frighteningly fake, but the crossover is obvious. Studies of pay-per-view ratings suggest that MMA siphons more viewers from wrestling than from boxing; as the young male demographic ages, it gets less sated by wrestling’s cartoonish side and hungrier for MMA’s undiluted violence.

One senses that Obama is smart enough to follow the path of least resistance. That is, ride the endless waves of American kitsch, and not strain to be something he isn’t. This spring, when World Wrestling Entertainment invited the candidates to do a shtick on the highly rated USA cable show “Monday Night Raw,” Obama read his lines dutifully. Go ahead and cringe – the man wants to run the country more than he seeks your feather in his cap. When he needs to admonish his base, whether it’s Jesse Jackson or Snoop Doggy Dog, Obama makes sure he picks on targets who have nowhere else to go. In 1992, Bill Clinton had his “Sister Souljah moment.” Obama, who is actually black, not just a wannabe black, has turned that rhetorical trope into an art form. Even the controversy over the New Yorker cover was a kind of highbrow Sister Souljah moment.

More and more, John McCain looks like the Bob Dole of 2008: a decorated and largely honorable dinosaur of the national scene who seems destined to get more discombobulated and shrill about why his Republican nomination, essentially a lifetime achievement award, gains no traction with general election voters.

Recently, McCain made an astonishingly unsuccessful attempt to exploit the fact that Obama both opposed the strategic step of war in Iraq and had some not entirely unkind things to say about the tactical step of the troop surge. Even Christopher Hitchens – no friend of Obama’s or of Beyond Chron readers – took note of Obama’s clear superiority over McCain at “jujitsu, where the strength of your opponent is precisely what you use against him.”

Jujitsu, by the way, is one of the core disciplines of mixed martial arts. Try explaining that one, Senator McCain, to the yahoos at the Sturgis Rally.

Irvin Muchnick, a frequent Beyond Chron contributor, is author of “Wrestling Babylon: Piledriving Tales of Drugs, Sex, Death, and Scandal” and the forthcoming “Chris and Nancy: The True Story of the Benoit Murder-Suicide and Pro Wrestling’s Cocktail of Death.” Website: http://wrestlingbabylon.com. Blog: http://muchnick.net/babylon.