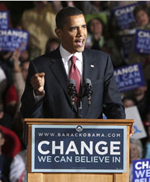 As Howard Fineman said last night, “everyone knows Barack Obama has won, and it is only a matter of finding a way to let Hillary Clinton wrap it up without blowing up the party.” Though Clinton’s decisive win in Kentucky kept the pundits moaning that Obama still has a “white problem,” the Illinois Senator won the very white state of Oregon by a 16-point margin. Obama also hit a critical milestone by clinching a majority of pledged delegates – effectively ending the race.

In Oregon’s Senate primary, state House Speaker Jeff Merkley narrowly beat attorney Steve Novick – and will take on G.O.P. incumbent Gordon Smith in the fall. Novick was the “progressive” in that race, but Merkley should be a strong candidate in a potential Democratic pick-up seat. He also has a good affordable housing record, having been Executive Director of Portland Habitat for Humanity.