Obama Had to Go on Fox News 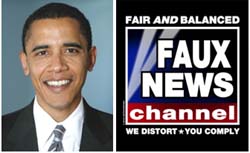 The liberal blogs and MoveOn.org are apoplectic that Barack Obama went on Fox News this weekend. Obama had refused for 771 days to go on the right-wing news outlet after they lied about his past, so to his crowd of supporters his recent agreement to go on “Fox News Sunday” spelled betrayal. But with the Democratic nomination effectively over, Obama needs to start courting general election voters – many of whom, like it or not, rely on Fox for their political news. It would have been hypocritical for a candidate who wants to unite “red and blue states” to continue boycotting how red-state voters get their news. And appearing on Fox News to court general election voters was far less offensive than changing how you vote in the Senate – which is what Hillary Clinton did to pick up “swing voters.”

Going on Fox News is like walking into a lion’s den – and allowing them to set the terms of debate is a recipe for disaster. But before we point out how uninformed Fox News viewers are about whether Saddam Hussein had weapons of mass destruction, bear in mind that only 52% call themselves “conservative.” And while 88% of them supported George Bush in 2004, when you consider that it’s the number-one rated news cable station – even twelve percent translates into a lot of people.

While most Fox viewers would never vote for a Democrat, a sizable chunk would and could – and that’s an audience that the presidential nominee can’t afford to ignore.

Yesterday, blogger Chris Bowers wondered why Obama would agree to go on Fox News rather than return to the liberal blog Daily Kos – because “there are far more Democratic primary voters to be found on Daily Kos than on Fox News.” Which is a fair question to ask when Obama still had to compete with Hillary Clinton to win the party’s nomination. But Daily Kos readers already support him over Clinton. And because he has taken an insurmountable delegate lead that will hold up to the Convention, Obama can now afford to take on his real foe: Republican John McCain.

When Obama first refused to go on Fox News, I commended him for taking a stance that most Democrats are afraid to take. And it certainly made sense for MoveOn and the liberal blogs to pressure the Nevada Democratic Party to drop Fox News from co-sponsoring a debate, because we knew that it would be a sham. But that was when the target audience was Democratic primary voters. Now the target audience has to be voters who are trying to decide between McCain and Obama.

Back in September, when Hillary Clinton was well ahead in the polls, she voted for the Kyl-Lieberman Resolution – the first step towards a preemptive War with Iran. At the time, some supporters told the New York Times that “she has already shifted from primary mode, when she needs to guard against critics from the left, to general election mode, when she must guard against critics from the right.” Because Clinton calculated that she could take the Democratic base for granted, she had already moved beyond them and started courting independent voters.

Liberals have always struggled with the dilemma of how to win elections while sticking to your principles. The Clinton approach involves betraying your base – through a policy of triangulation – in order to “inoculate” from right-wing attacks. It leaves supporters in a perpetually depressed state, but they don’t dare vote for a Green Party candidate – for fear of being a “spoiler” to an eventual Republican victory. All in all, it’s not exactly a very empowering experience for those who fight for progressive change.

But that’s not what Obama did by going on Fox News. There’s a world of a difference between changing how you vote on a substantive issue (and thus losing your political spine) to attract more conservative voters – versus stepping into unfriendly territory to engage those who are not naturally inclined to support you. Obama is trying to do the reverse of what Ronald Reagan did in the 1980’s by securing “Reagan Democrats.” By going on Fox News, he was working to secure and recruit “Obama Republicans.”

As Randy Shaw explained back in January, the Left doesn’t appreciate Obama because they mistrust anyone who tries to build a base of support among people who don’t think like them. But electoral math dictates that a presidential candidate needs to win more than like-minded liberals. There are ways to pick up conservative votes without compromising your basic principles.

Does this mean that Obama should go on Fox News regularly? Of course not. It is well-documented that the TV station is a right-wing propaganda outlet that seeks to attack and delegitimize progressives – and to treat it as “news” is like fighting a losing battle. But Obama had already boycotted the station for 771 days, and to keep doing so would have accomplished little. By agreeing to go on for one interview – which I believe that he handled pretty well – Obama can put to rest the notion that he has something to hide.

If the bloggers think that Obama is “selling out,” focus on where he stands on substantive issues. Because that – rather than what TV station he goes on – will matter in building a more progressive future.