Obama Did Not “Punk” the Common Guy 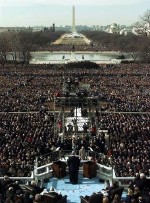 Has Barack Obama abandoned the populist policies that got him elected, and done nothing for working people? Frank Rich of the New York Times certainly implies this, framing his August 9 column around a claim by a Virginia real estate agent that “nothing’s changed for the common guy. I feel like I’ve been punked.” But Obama’s record disproves Rich’s point. The stimulus program targeted jobs for working-class Americans, and allocated tens of millions of dollars for immediate rent subsidies for homeless and ill-housed families. Further, Obama is using every political chit to secure health coverage for 47 million “common “ Americans, strongly endorsing the public option that other Democrats and the Republican Party are seeking to kill. Meanwhile, an economy in free fall has begun to turn around, and while unemployment remains high, this is not because Obama “punked” voters. Progressives are understandably concerned about Obama’s policies in several areas, but claiming “nothing’s changed for the common guy” is simply wrong.

In these tough economic times, it’s understandable that some would believe that President Barack Obama could wave a magic wand and dramatically reduce unemployment six months after taking office. But we count upon journalists like Frank Rich to let facts – rather than personal anecdotes – drive their analysis.

If Dennis Kucinich had been elected President and taken office last January, he could not have done more to help the “common guy” to date than has Barack Obama. And if Obama had endorsed and Congress passed New York Times columnist Paul Krugman’s proposal for a much larger stimulus package, these funds would not have reached working Americans any faster.

That’s because there is an inevitable time gap between the passing of legislation and the allocation of funds. Regulations must be written, and then Requests for Proposal must be drafted, issued and reviewed.

For example, San Francisco recently awarded $8 million in stimulus funds designed for homelessness prevention and the rapid re-housing of those facing the loss of their homes. Although none of these funds – nor the tens of millions of dollars allocated nationally – has yet been spent, all of this money has been targeted for, and will soon reach, previously forgotten Americans.

Does Obama’s allocation of money that has not yet been spent mean “nothing’s changed for the common guy”? To the contrary, a lot has changed. The federal government largely ignored the nation’s low-income housing crisis during the Bush years, and Obama’s housing stimulus funding was inconceivable prior to his election.

Further, what if Obama had asked Congress on January 20, 2009 to allocate one trillion dollars to end widespread homelessness in the United States? Even if Congress promptly complied, it takes at least two years to build new housing, so that none of the new units would house homeless persons until 2011. Would this mean that Obama had done “nothing” to address homelessness?

Those arguing that Obama has not delivered for the average working stiff after six months in office are essentially promoting the Republican agenda favoring tax cuts over public investment. Tax cuts are popular in a culture of one-hour news cycles and 140-word tweets, as they allow politicians to offer “change” to the “common guy” by putting a few more bucks in their pocket

But its been clear since the Reagan years that tax cuts are the least effective method of stimulating jobs, which is why progressives have long backed the public investment strategy that Obama has promoted. Ironically, many of the middle-class tax cuts included in Obama’s stimulus plan have already taken effect – a fact Rich overlooks – while it’s the more effective, progressive-driven public investment strategies that take more time.

Health Care for the Common Guy

Is there anything more Barack Obama could have done thus far to provide health care for the 47 million “common guys” lacking it? There is a difference between questioning Obama’s health care strategy, or arguing that he should have promoted single-payer, and concluding that he was “punking” voters on the issue.

As I discussed on August 10, health care reform is a tough, complicated issue. How can the Virginia real estate agent featured in both the Washington Post and the New York Times for claiming that she’s been “punked” by Obama really believe that “nothing’s changed” when Obama is making the strongest effort to enact universal health care in the history of this nation?

Obama has put health care reform at the center of the national debate after fifteen years when it was off-limits. Universal health care with a public plan was not enacted before the August recess, but that hardly means “nothing’s changed” around health care since Obama took office.

While some claim “nothing’s changed,” Republicans feel everything has changed, and that in six months President Obama has enacted Socialism. Progressives are understandably frustrated over status quo policies toward terrorism, Iraq, Afghanistan, and the ongoing harassment of undocumented immigrants. But only someone who slept through the Bush years and woke up at Obama’s inauguration could believe that “nothing’s changed,” or that the President won election by “punking” voters.