Obama Advisors Offer No Cause for Concern 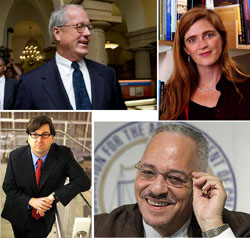 This past week offered a preview of the media coverage of the Obama-McCain race that we can expect through Election Day. The goal: “balanced” coverage, regardless of the relative importance of what occurs. For example, after John McCain claimed that bringing troops the home from Iraq was “not too important”—an assertion that sent a terrible message to current soldiers and their families—the media “balanced” this with stories criticizing the background of one of the three Obama advisors “vetting” Vice-Presidential nominees. Although Obama’s choice of vetters, unlike McCain’s statement about Iraq, had no policy implications, it received much greater attention in the June 12 New York Times. The Times also ran a prominent piece that day discussing the AFL-CIO’s unhappiness with Obama’s choice for chief economic advisor. As much as the media and Obama critics seek to “bring Obama down to earth,” it is misdirected to focus on the political histories of his advisors, rather than on his own pronouncements and acts.

One has to go as far back as 1952 (Eisenhower v. Stevenson) to find a presidential race without an incumbent where the outcome is virtually certain so far in advance. The media knows Barack Obama is overwhelmingly favored to defeat John McCain, but must create the appearance that the contest remains tight.

To that end, the traditional media has a choice. It either avoids writing stories day after day about McCain’s ongoing gaffes, or “balances” these stories through equally critical pieces about Barack Obama. Since Obama does not make McCain-type mistakes on a daily basis, the media must seek out negative stories where they can find them.

In Obama’s case, this has primarily resulted in negative stories about Obama associates and advisors. We saw this with Reverend Wright, and then with Samantha Power (she told a reporter off the record that Hillary Clinton was a “monster” and the comment got printed), and then right before the Ohio primary with Austan Goolsbee, an unpaid economic advisor accused (falsely, it turned out) of telling Canadian officials that they should ignore Obama’s criticisms of NAFTA.

This week, the focus turned first to James Johnson, a longtime Washington insider who led John Kerry’s VP search in 2004 and was picked by Obama to be one of three leaders in the “vetting” process. Although Johnson’s relationship with Countrywide Financial did not raise any concerns when he worked for Kerry, the media—led by the New York Times—treated Johnson’s selection by Obama as a virtual scandal.

Is there anyone in the media who really believes that Johnson’s role was anything but ceremonial? Or who thinks that public meetings with potential VP candidates are anything more than ego-padding and political stroking?

My take on Johnson’s selection was that Obama was using a purely symbolic act to send a message to the Establishment that he would not ignore their expertise. And had he picked a team of vetters who lacked any insider credentials, the media would instead have attacked him on that basis.

Supporters also need not be concerned about Obama’s selection of Jason Furman, a key ally of Robert Rubin, as his economic policy director. While AFL-CIO head John Sweeney criticized Furman’s corporate ties and pro-business views, it is Barack Obama – not Furman – who will be making policy.

Sweeney knows how the game is played, and was sending a message to Obama that labor is paying attention to his associates. But there are some who look at the Furman selection and conclude that Obama is already headed in the direction of Bill Clinton, whose economic populism in the 1992 campaign translated into NAFTA and pro-corporate policies after he took office.

But neither Bill Clinton nor the prior Democratic President, Jimmy Carter, came into office with a commitment to pursue economic policies favorable to labor unions and working people. Unlike Barack Obama, neither had core values that paralleled those held by the progressive wing of the Democratic Party (which is why Ted Kennedy challenged incumbent Carter in the 1980 primaries.)

Clinton deferred to Robert Rubin’s economic agenda because he agreed with it; Obama comes from a much different political background from Clinton and Carter, and until he makes statements or takes actions inconsistent with progressive economic policies, he should not be judged by his advisors views.

Expect More of the Same

As Obama broadens his campaign team, the media will continue generating “controversies” around his selections. Obama will be put in a no-win situation: he will either be criticized for picking “Establishment” people who allegedly “undermine” his commitment to change, or be charged with selecting too many “outsiders” who do not know the ways of Washington DC.

As Obama wisely picks advisors representing the diversity of the Democratic Party, the media is likely to analogize these selections to the “flip flopping” of John McCain. Pundits will make no distinction between a candidate espousing conflicting positions and a candidate whose advisors hold different views.

Franklin Roosevelt was known for surrounding himself with advisors who often had sharply conflicting opinions, as he felt that hearing all sides of debates was the best way for him to decide his course. Such an approach requires a President self-confident enough to hear dissenting opinions, a quality that Obama has and George W. Bush lacks.

So Obama supporters should be glad that the nominee has the inner strength to recruit those of divergent views; it will result in better policies and programs after he takes the White House.