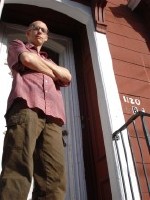 Don Hughs was one of six people renting at 1120 Center Street when the house was foreclosed upon in September 2007. The property had been snatched up by the Bank of New York (BNY), an out-of-state speculating entity, and the residents found themselves in a leaseless housing limbo.

Most foreclosure victims are quick to scram when the bank tells them to. After all, here BNY appeared to have all the muscle in the situation, with the deed and total legal ownership of the property. But Hughs still had the keys …

This was just one month before then-Treasury Secretary Henry Paulson declared the mounting housing crisis “the most significant current risk” for the US economy. The bursting California housing bubble was splattering all over the Bay Area and its mess was becoming increasingly noticeable.

Unlike many victims of foreclosure, who wind up broke and displaced, Hughs decided to stay. As the leaseholder, he received a letter from the bank requesting that the residents leave within a month. If they could produce a copy of their lease, they would be allowed to stay for an additional month – which they did.

“They wrote in the letter ‘We’re not in the business of being landlords,’” Hughs quoted. “‘We don’t want any money from you. It’s our policy not to do any work of a landlord. We only care about speculation.’”

Hughs refused to leave, citing the Oakland’s “Just Cause” Ordinance, which states that landlords need to have a valid reason for evicting a tenant. Valid reasons can include non-payment of rent, subletting, selling drugs, damaging property, trash or implementation of the Ellis Act, which is when a property is taken off the market in order for the owner to live in it, But “just cause” holds that a tenant cannot be evicted arbitrarily.

BNY’s attorney, Ronald Roup – who is infamous in the area for ejecting people from their homes – filed a Verified Complaint for an Unlawful Detainer (an eviction lawsuit). Rupe’s written argument was that the tenants were “living there without permission.” But as Hughs astutely pointed out in an answer filing at the city clerk’s office (a person has five days to file an answer, including weekends), that’s not actually a reason to evict someone. Consequently, the case was dismissed.

In March, BNY reemerged with a new offer. They claimed that they would play landlord if the tenants paid the $12,000 that they owed in back rent.

“They were banking on the fact that we didn’t have $12,000,”Hughs said. Which was true. But instead of fumbling on his move, Hughs filed another claim at the city clerk’s office – this one stating that they were on rent strike until the landlord fixed a list of problems with the house. Some problems included broken pipes, sewage leaks, broken gate, mold in carpet, broken toilet and non-secure windows. According to Hughs, the conditions were so bad that “the city had declared us a health hazard.”

BNY sent an inspector to the house to verify the claims, but they gave no notice, and no one was home when they arrived. A few days later, a man came to the door and introduced himself as realtor Mason Yanowitz. He claimed he was there to list the problems with the house and make an assessment for the bank. Hughs still refused to let him in.

“It wasn’t an issue of trying to evict someone,” Yanowitz argued. “I couldn’t even get inside to do the assessment of things that needed to be fixed. I don’t have a magic wand – I can’t fix things from the sidewalk.

Hughs told Yanowitz that he wasn’t allowed on the property and that he wouldn’t talk to him until his lawyer was present. But Yanowitz darted into the backyard with a camera anyway, stating that he had an appointment with the owner, which gave him permission to be on the property. Hughs chased after him, attempting to block all photographs of the yard.

“He tried sticking the camera between his legs, thinking that I wouldn’t go near his crotch,” Hughs laughed. “When I got close, he shouted, ‘You stink!’ So I said, ‘I’ll rub my armpits all over you if you don’t go away.’”

According to Hughs, a farce ensued in which Yanowitz jumped about the yard as Hughs nimbly blocked his camera. They pushed each other some and climbed around the picnic table. In the end, Hughs’ fingers wound up in every one of Yanowitz’s photos.

“This is not 2005 when people were making offers without seeing inside,” Yanowitz said. “Now there’s so many properties to choose from that it’s not that way anymore. With the market dropping as fast as it has been, it’s in the bank’s interest to sell it fast with the tenants still in there. I need to clean the place up to get it sold, but I can’t get inside.”

Eventually, the frustrated realtor left. Feeling violated, Hughs promptly fashioned a “no trespassing” sign with permanent marker on a piece of corrugated cardboard and wedged it on top of the fence. He also jammed a log behind the gate in lieu of a functioning lock.

In the coming months, Hughs continued to receive unexpected visitors.

“I woke up at 7a.m. to people dragging stuff out of the yard and into a truck,” Hughs said. “They came in and took stuff out of our yard and cut all our plants down. They also chopped up our camping stove with an axe. I asked them who they were, and they said, ‘Department of Blight. We work for the city.’”

According to the loosely written Alameda County General Code, anything that contributes to conditions that cause blight and property degradation is considered blight. Therefore, if a nosey neighbor finds your garden “offensive to the public eye,” they can report it as a blight violation.

Hughs was furthermore harassed by Vector Control, whose mission is to “prevent human disease, injury, and discomfort…by controlling insects, rodents, and other vectors.” They had come to remove the bees that Hughs was keeping in the backyard.

Months went by. The next time that Hughs heard from BNY was that following November when he received another form demanding the names of the people living at 1120 Center St. and also a copy of the lease. Hughs responded by saying that BNY did not need to know who was living there and that they already sent a copy of the lease. BNY lawyers had, in fact, referred to it in a previous filing.

“They were just trying to make us sound crazy,” Hughs said. “They tried to claim that we never sent the lease and that we wouldn’t let inspectors in.”

Luckily, Hughs was able to contact the Eviction Defense Center at 1611 Telegraph Ave. in downtown Oakland. The Center is a non-profit law corporation and exists specifically to help low-income Bay Area tenants fight eviction. According to executive director Anne Omura, Hughs’ case is not unique.

“A lot of times, a landlord gets foreclosed on and leaves tenants behind,” she said. “There is a really sad trend of tenants who’ve done nothing wrong, and a lot of times tenants continue to pay rent but the landlord doesn’t own the property anymore. And then that money is just gone.”

The Eviction Defense Center does not represent prior owners who have been foreclosed on, only tenants, who are protected by Oakland’s Just Cause Ordinance.

According to Omura, however, many attorneys who represent banks are from out of county and are unfamiliar with local laws. When they do know the laws, they try to circumvent them. Numerous real estate agents and law firms, including BNY’s Ronald Roup, are on watch lists for continually filing lawsuits with no legal merit. Or for using intimidation.

“Banks hire aggressive and often times unscrupulous agents who will bang on the door and threaten [tenants],” Omura said, “and a lot of people don’t know their rights and end up getting displaced.”

Eighty percent of the Center’s clients are on welfare, and many of them are also single parents, disabled or have a fixed income. To these people, fighting their eviction may actually mean the difference between a roof over their heads and homelessness.

“A lot of people get scared out of homes because they didn’t know they had any rights and moved out,” Omura said. “If they go through our services, we do everything we can to make the best possible result to avoid homelessness.”

Hughs said that his experience with the Center was user-friendly, unlike the rest of the legal system; he paid $40 for a consultation and to file papers, and it cost him $90 to go to court. Considering all the money he was saving while on rent strike, the minimal fees seemed worth it.

Hughs first approached the Eviction Defense Center on Nov. 20, 2008. The Center filed a demand for a jury trial, and on Feb. 6 they represented him at a court appearance. A week later, Hughs got his settlement: After a year and a half of maintaining his home and living rent-free, he promised to leave the property within 30 days in exchange for $4,000.

“I think people should fight for their homes,” Hughs said, looking around his jumbled, half-packed living room. “A quarter of this neighborhood is gone from five years ago.”

Hannah E. Dobbz is a freelance writer, editor and filmmaker, currently researching a second documentary on squatting and property law.