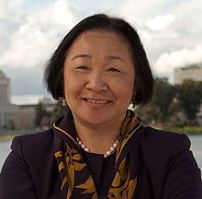 Oakland is booming. Filled with new bars, restaurants and housing, the city is the go-to place for hipsters and young people unable to afford high San Francisco rents. Now that Mayor Jean Quan has appointed the popular Fred Blackwell to essentially run the city, a mayor left for politically dead actually has a chance at re-election.

After Jean Quan appointed Fred Blackwell to the position of City Administrator last week, I thought: given that Blackwell is among the Bay Area’s most effective public officials, doesn’t this mean that more voters will back Quan’s re-election?

Stranger things have happened. And win or lose, Quan is in a much better position than most thought possible only months ago.

Back from the Dead

In my January 6, 2014 political predictions column, I saw Libby Schaff and Rebecca Kaplan as the favorites to win the November Oakland mayor’s race. Schaff would benefit from voters primarily concerned about crime, while Kaplan would get the young, progressive voters who are a growing political force in Oakland.

But in the past two months, the dynamics of the race have changed.

First, Kaplan has inexplicably not entered the race. I say “inexplicably” because she would start with a large and enthusiastic voting bloc and has fewer negatives than any major candidate in the race. And in ranked-choice voting, having fewer negatives gets you more second and third place votes, which can be the key to victory.

It’s certainly not too late for Kaplan to join the race, but if she stays out, that helps Jean Quan by removing a top competitor.

Quan has also been helped by the sudden appearance of a new story line about Oakland. Instead of reporters writing primarily about crime and administrative dysfunction (though with Quan the latter will never go away), we now see stories about new housing and commercial developments. Oakland is now routinely described as the new home for the young and “cool” hipsters who once lived in San Francisco.

I first began thinking that Jean Quan could come back from the politically dead when I read SF Chronicle columnist Chip Johnson’s February 7 column, “Groundwork Starting to Pay Off in Oakland.” Long critical of Quan, Johnson rarely has a good word to say about any Oakland mayor not named Jerry Brown. Yet after citing lower crime, fewer homicides, and a growing economic revitalization, even skeptic Johnson concludes, “I don’t usually buy government-generated buzz about renaissance and revitalization, and this is an election year, but there’s something different at work here. If you consider sheer construction volume alone and the investment it represents, it carries an unfamiliar ring of credibility. “

Johnson’s attitude shift was clearly impacted by Fred Blackwell’s ever expanding role in Oakland’s revitalization. I got to know Blackwell during his brief tenure as head of San Francisco’s Redevelopment Agency. As I told him then, if he had been in charge when the Agency misspent $100-200 on 6th Street, we would not still be talking about having to spend tens of millions of dollars reviving that area.

Blackwell has instilled confidence in developers and the business community that someone who knows what they are doing is now in charge in Oakland. And if these interests are happy with Blackwell running the city—and unlike San Francisco, Oakland’s City Administrator has more power over city operations than the mayor—then why elect a mayor who will bring in someone new?

My January 6 column predicted Dan Siegel would enter the mayor’s race, and this has occurred. If Kaplan stays out, Siegel would have the left wing of the progressive electorate all to himself.

Oakland City Auditor Courtney Ruby recently entered the race, saying that public safety is her major issue. This puts her and Schaff competing for voters prioritizing crime, and her entry would not appear to take any votes from Quan.

The race will not have a strong African American candidate. But in a city with many African American voters, Quan’s empowerment of two popular black men—Blackwell is City Administer and former Assemblymember Sandre Swanson is Deputy Mayor—could give her a major edge among this constituency.

Quan is also likely to be the leading choice of labor. While many rank and file labor activists support Siegel, Oakland’s major unions are likely to stick with Quan.

The January 8, 2012 NY Times Travel section ranked Oakland as the 5th best place to travel in the entire world. I’ve been to Oakland enough to know that it is not, but expect Quan to ask voters why they would defeat the mayor who has elevated Oakland to such a lofty stature.

There is still ample time before November for Quan to pull more on the many misteps that plagued her Administration almost from the day she took office. Any politician who could botch the Occupy protests as badly as she did—which I described in a 2011 column, “The Tragedy of Jean Quan”– remains capable of similar mistakes.

Yet it seems that someone has finally gotten ahold of Quan, or she has stared into her own political abyss and decided to change.

In his 1969 re-election campaign in New York City, underdog incumbent John Lindsay sought to win the support of voters unhappy with his first term by repeatedly admitting that “mistakes were made.” Quan is likely to follow Lindsay’s lead, which resulted in a mayor thought to be politically dead winning re-election.

Randy Shaw is Editor of BeyondChron