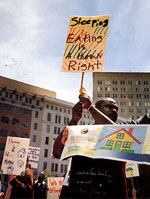 On Wednesday, January 4th, Judge Steven Brick of the Alameda County Superior Court rejected a lawsuit seeking to overturn Measure EE, which was passed by voters in November 2002 and provides Just Cause eviction protections similar to those in San Francisco. The ruling is a clear victory for Oakland tenants in that the vast majority of the law remains intact and in effect. The community and the city have been fighting this lawsuit for the past three years. After reviewing the arguments for several months, the Judge ruled that only a very few of the landlords’ complaints were valid and ruled that the law should remain in effect despite the striking of some minor phrases within the law.

The upholding of Measure EE represents a tremendous victory both for those who fought to pass the law and defend it in court but also for all tenants protected by rent control statewide. Oakland becomes yet another large city whose tenants are now protected by meaningful rent controls and eviction protections.

With ongoing threats of gentrification in Oakland, the upholding of Measure EE gives tenants a critical weapon of opposition.