Oakland is not Brooklyn, and Valencia St. is not San Francisco 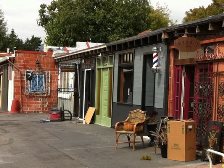 The media loves using specific streets and businesses to define entire cities. But Temescal Alley is not Oakland, Oakland is not “Brooklyn by the Bay,” and Valencia Street is a misleading representation of San Francisco.

Brooklyn’s population is over five times that of Oakland (2.5 million vs. 390,000), but that did not stop the New York Times (see link above) from claiming that Brooklyn is to Manhattan what Oakland is to San Francisco. Reporter Matt Haber noted that “Many people seem to be hoping that the Oakland-as-Brooklyn narrative—or at the very least, the idea that Oakland is a top-flight creative capital — takes off.” His story places him among this group, whose wishful thinking that Oakland can become Brooklyn without gentrification ignores Williamsburg, Brooklyn Heights, Dumbo, Park Slope, Carroll Gardens, Boerum Hill and other upscale communities in that borough.

But less important than Haber’s false equation of Brooklyn to Oakland is the method in which he and other reporters define cities.

Temescal Alley is a short, roughly 500 foot stretch a half block off Telegraph near 51st Street. Although I regularly eat at nearby Pizzaiolo, I was not even aware of Temescal Alley until the New York Times did a large profile on it in April 2012 (“An Oakland Neighborhood Branches Out”) This was followed by a San Francisco Chronicle story in July 2013, “Oakland’s hip and vibrant Temescal Alley takes off.”

For Haber and other reporters, this tiny, segment of Oakland not only is part of the city, it defines it. His article on Oakland as Brooklyn by the Bay begins:

On a recent Tuesday afternoon, a group of well-dressed and soon-to-be well-groomed men sat patiently in the sun outside Temescal Alley Barbershop waiting for $25 haircuts and $30 straight-razor shaves. Some idly pecked at their phones, while others wandered into Standard & Strange, a men’s clothing store that stocks rugged-looking American-made apparel and accessories as well as some carefully selected items from overseas like Tender jeans, which are handmade and dyed by one guy in Britain and sell for $350. (A leather belt thick enough to harness a thoroughbred, also from Tender, will set you back $240.)

Walking around this outpost of cool off Telegraph Avenue, you may forget that you’re just across the bay from San Francisco and not in, say, an oft-cited borough of New York City where style, shopping and food have become major draws.

Haber does not disclose that a half block from this affluent scene is a large strip mall anchored by Walgreens where panhandlers and homeless people congregate. The gentrified, upscale Temescal Alley is an aberration even in its own neighborhood, yet repeatedly is identified as representing the city’s future.

Haber and other media also read far too much into Oakland’s once a month First Fridays. This event is a huge success and lots of fun, but its overwhelming young, white participants says more about the cultural life of that demographic than it says about Oakland.

Temescal Alley, First Fridays, and West Oakland’s Brown Sugar Kitchen (also highlighted in a March 2014 SF Chronicle story) have become the totems allowing reporters to define a city without substantive research. They are the substitute for integrating input from elected officials and community activists. By selectively picking this hipster restaurant and that upscale barber shop, a portrait can be created that does not speak to the daily realities of most city residents.

San Francisco has its own totems used by reporters to represent the city. Chief among them is Valencia Street. Rare is the San Francisco story that does not define Valencia Street as emblematic of the city’s alleged transformation into an upscale play space for young tech workers.

I spent the 1980’s riding my bike to work down Valencia Street. The street has since been dramatically transformed. In fact, Valencia Street is unlike any other street in the city, which makes it a poor choice as an emblem for a broader San Francisco transformation.

It’s no mystery why reporters flock to Valencia Street for stories on how tech has transformed San Francisco. Putting aside the fact that Valencia became a hotbed for bars and restaurants prior to the 2011 tech boom, a very different portrait would result if the media sought to depict a changing San Francisco by measuring the transformation of Clement Street. Or Irving Street. Or Ocean Avenue.

Those shopping on these major retail streets reflect a much different demographic than Valencia Street. Yet despite all three streets being just as much a part of San Francisco as Valencia, they are ignored in media accounts because they do not fit reporters’ planned stories of a dramatically changed city.

If a reporter on the “tech has changed San Francisco irrevocably” beat did look for evidence along the above retail districts, or even on Mission Street a block from Valencia, they would find a very different story than what is commonly reported about San Francisco. But a story on the lack of dramatic change in most of San Francisco’s neighborhood retail districts would not be “news.” Editors expect a front line account on the wholesale tech transformation, not a story showing that many of the city’s key neighborhood shopping districts are visibly the same (reporters can easily write “transformation” stories based on rising rents and home prices, but this lacks the visuals provided by Valencia Street’s organic ice cream stores and bar scene).

We read so much about Valencia Street because it appears to provide smoking gun visual proof that tech has made San Francisco a very different city.

But as with Temescal Alley and Oakland, what really distinguishes Valencia Street is its exceptionalism from the rest of San Francisco. For example, it has far more nighttime activity (a level not seen in the city since Broadway in the 1980’s, or possibly Castro Street near Market in the 1970’s and 1980’s, though its high energy only extended for a few blocks. Today, Columbus Avenue in North Beach has crowds, but its evening energy comes from tourists).

A story about a changing San Francisco using Clement Street as a backdrop would have to explain the high numbers of Asian-Americans in cafes, bars and restaurants. San Francisco’s large Chinese-American population is routinely written out of stories on a changing city, even though Ed Lee is mayor. Since Valencia Street at night includes more whites than are found in many other San Francisco retail districts, it obscures the real story of the city’s transformation—which is Asian-Americans rising numbers and political clout.

Oakland will never be Brooklyn, and the media should similarly stop trying to make Valencia Street emblematic of San Francisco.