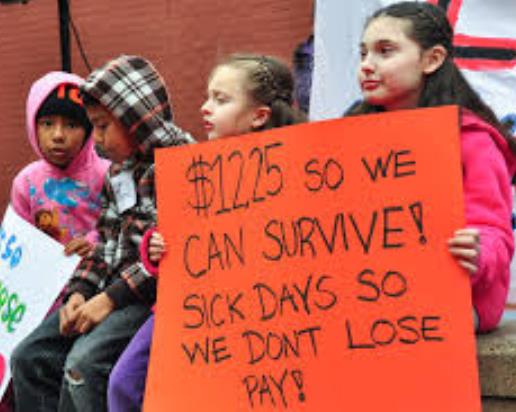 Strong pushback from the business community may jeopardize the efforts to improve the standard of living of the thousands of working-class residents across Oakland.

The Oakland Metropolitan Chamber of Commerce has created a counter proposal  significantly reducing the impact that a minimum wage increase would have for workers. It follows four months of gathering signatures by members of the Lift Up Oakland coalition that qualified a ballot measure for November to raise Oakland’s minimum wage to $12.25 and provide paid sick days for workers.

Lift Up Oakland, a grassroots coalition of labor and community groups, gathered over 33,000 signatures and secured endorsements from around 60 organizations and politicians. With widespread support, the Alameda County Registrar of Voters approved the coalition’s ballot initiativein late June. The Oakland City Council still needs to approve the initiative for November’s ballot, but the business lobby is looking to water down the legislation.

“The Chamber of Commerce is trying to silence our voices by telling the City Council it should exempt most employers from having to provide a wage increase next year, forcing Oakland families to keep falling behind as the cost of living in the Bay Area keeps rising,” Lift Up Oakland said.

The Lift Up Oakland measure would increase the minimum wage immediately to $12.25 on March 2, 2015 if passed.

The counter measure, however, would stagger wage increases over the course of three years, similar to Seattle’s complicated proposed minimum wage increases. The business-backed plan would increase the minimum wage to $11 in 2015, $12 in 2016, and $13 in 2017 for businesses with over 20 full-time employees. Small businesses with less than 20 employees, though, would be given a two year reprieve, meaning the $13 minimum wouldn’t be enacted until 2019.

“It doesn’t do enough,” President of Lift Up Oakland Gary Jimenez told Beyond Chron of the Chamber’s proposal. “It doesn’t give people real hope for a wage increase any time soon.”

While the Chamber’s plan includes a higher minimum wage than the Lift Up proposal, wage increases would not occur immediately and has questionable motives given the Chamber’s recent opposition to just a slight increase of $10.20 proposed by Councilmember Larry Reid in late April. The state minimum wage increased to $9 per hour as of July 1, and so the counter proposal’s supposed increase will have far less impact than their claims.

With Berkeley voting to raise their minimum wage to $12.53 by 2016 last month and cities like San Francisco pushing for a $15 minimum wage by 2018, many see Oakland’s proposed $12.25 as just the beginning.

Mayoral candidate Dan Siegel, who endorses the Lift Up measure and has advocated for a $15 minimum wage, told Beyond Chron that the passage of the Lift Up Oakland measure would give momentum for possible increases to $15 or more.

“They are going all out to try to co-opt this energy,” Siegel said of the Chamber’s proposal, “and convince the public that their proposal is sufficient and would really make a difference.”

A recent study on Lift Up Oakland’s initiative conducted by the University of California, Berkeley Institute for Research on Labor and Employment found that up to 48,000 workers, or 30% of Oakland workers, would see a benefit from the $12.25 minimum wage increase. Workers of color, whom constitute about 62.1% of the total workforce, make up 78.7% of those that would be affected by the minimum wage increase. Additionally, 56,700 workers will get paid sick time with the Lift Up Oakland measure.

A report conducted by the Oakland City Administrator was more conscious of the effects on businesses but found similar conclusions to the UC Berkeley report, stating that $12.25 “would be a significant step towards improving income equality and social equity in Oakland.”

Mayoral candidates Oakland Mayor Jean Quan and Councilmember Libby Schaaf have also endorsed the Lift Up Oakland initiative but did not return calls.

The Lift Up Oakland planned action today is at 12:00 pm at the Metropolitan Chamber of Commerce located at 475 14th St #100, and a press release will occur at 1:00 pm in front of City Hall.