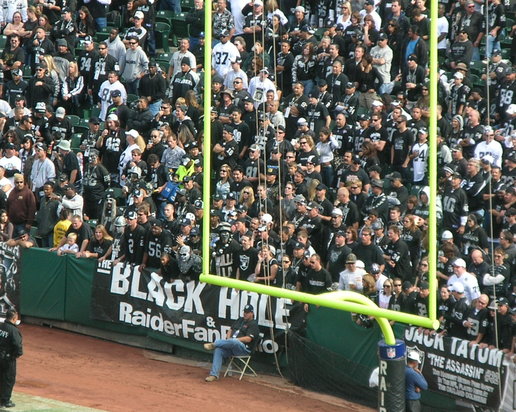 For a city moving forward on multiple fronts, Oakland now finds itself facing another “Raiders to LA” threat. The city’s response should be obvious: tell the Raiders to leave for Los Angeles and don’t slam door on the way out.

Oakland Mayor Libby Schaaf has made it clear that “public funding” for a Raiders stadium is not available. Yet former Mayor Elihu Harris made a similar pledge before the media manipulated “public” pressure forcing him and the city to make a bad deal. The Raiders return from Los Angeles has cost Alameda County taxpayers $20 million annually.

Just think how that $20 million in annual funding could have helped Oakland, Berkeley and other Alameda County schools. Alameda County cannot afford to adequately pay teachers, maintain its streets or provide vital services to the poor, yet some are again trying to divert millions of public dollars into an obscene dowry for another forced Raiders marriage.

No Raider Loyalty to Oakland

In 1982, the Raiders left the NFL’s most rabid and loyal fan base for a Los Angeles market that didn’t even care they were there. The reason? Money. Al Davis then brought the Raiders back to Oakland in a one-sided financial deal that has left the city reeling during down times. Again, Davis was entirely motivated by money.

Al Davis is gone, but nothing else has changed in Raiderland. The Raiders don’t care about Oakland. They no longer even seem to care about winning. What they do care passionately about i money.

The Raiders have been among the NFL’s worst teams for over a decade. They have made their loyal fans watch a non-competitive team that only once in recent years came even close to the playoffs (and coach Hue Jackson was then fired).

Los Angeles’ front running fans will never embrace such a losing team. But the Los Angeles community of Carson has made a financial offer for a new stadium that the Raiders are now using to force Oakland to throw millions of public dollars its way.

Under the proposed deal, the Raiders would share a Los Angeles stadium with the Chargers. The Spanos family owns the Chargers, with its patriarch/founder Alex once among the leading funders of anti-rent control campaigns in California.

I think the Davis’ and Spanos’ deserve each other. We could take bets on how long it would take for these arrogant owners to sue each other over their shared stadium.

The NFL has kept Los Angeles football-team free for a reason: the city is leverage for teams to use against political opposition to taxpayer funded new stadiums. Rare is the NFL owner that has not threatened to move the team to LA if his stadium dreams are not met; we now see the St. Louis Rams threatening to build their own new stadium in Los Angeles if St. Louis and Missouri taxpayers don’t step up with more money.

Maybe Raiders owner Mark Davis saw the Rams threaten to return to their former home and thought he could use the same strategy. And the same applies to the Chargers, which began in Los Angeles in 1960 as part of the American Football League before moving to San Diego.

If these team owners are to be believed, Los Angeles will soon go from having no teams to having three. That could cause havoc with NFL requirements that networks show all home games.in the local market.

Of course, the Rams are staying in St.Louis. Their threat to relocate quickly got politicians to promise a publicly funded stadium, which would open by 2020 (recall that the Rams left Los Angeles in 1995 because that city’s politicians refused to build a new stadium. The Rams got a new stadium in St. Louis and are now demanding a new one only twenty years later).

If the Raiders or Chargers moved to Los Angeles, all NFL teams would lose leverage for future stadium extortion. And the NFL would lose the $2 billion plus it could charge for an expansion team in LA, a payment that all teams would share (if the Clippers sold for $2billion, and NFL team in that city may actually be worth double that).

So the Raiders are not moving and Oakland should call their bluff.

Bluffs are most easily called when there is little downside for being wrong. In this case, in the unlikely event the Raiders again pick up and move to LA, Oakland will be better off in many ways.

First, instead of squandering public money on the Raiders it will help the people of Oakland.

Second, it makes it a lot easier to get a new A’s stadium built. Unlike the (T)Raiders, the A’s are an important brand and economic positive for Oakland.

I know some hardcore Raider fans who have season tickets and never miss a game. But they are a distinct minority of Alameda County residents.

Oakland does not need the Raiders to be a “world-class” city. This standard requires better schools, affordable housing, improved public transit and reduced crime.

Oakland has a chance in 2015 to do what it should have done in the early 1990’s. It should call the Raiders financial bluff and either let the team finance its own Oakland stadium or leave for a city that will not even notice they are there.