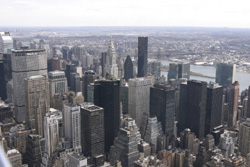 Since New York City rent control laws must be regularly renewed by the State Legislature, the city’s tenant advocates have been forced to deal with a Republican Governor and Republican-led State Senate for over a decade. While tenants have preserved city rent control laws, landlords have used their state-level political clout to weaken NYC tenant protections, particularly in the area of condo conversions.

The Times story yesterday described the impact of these weakened condo-conversion protections. For example, a middle-class rental building of over 100 residents was almost completely emptied after the owner announced plans in December 2004 to convert the building to luxury condominiums. Those remaining on the premises live amidst a construction zone, as the once affordable apartments are “upgraded” for sale.

As we know from the epidemic of Ellis Act evictions in North Beach, speculators can reap quick and easy profits from converting rental housing to condominiums. The Times story describes how one NYC investment group will double its money once the conversion is approved, with two-bedroom units selling for $2.37 million.

New York City once had a law that gave tenants under rent-control veto power over conversions, and this often led converters to sell units to these tenants at bargain prices to win their support for the conversion. But now only 15% of tenants must approve a conversion plan, outweighing opposition from the other 85%.

(The Times did not indicate whether the New York State Bar Association follows San Francisco’s lead in sponsoring legal seminars on how to evict tenants for profit. But given New York City’s history of demolishing SRO’s and the massive gentrification of Manhattan, it’s unlikely that Big Apple landlords need to look to San Francisco for guidance)

It is a telling statement about America that such class-driven social dislocation is allowed to proliferate in the bluest of cities in the bluest of states. But unless San Francisco progressives strengthen local condo conversion restrictions, our city will slowly but surely follow New York City’s lead in losing our middle-class rental housing stock.

With thousands of new condominiums soon to hit the San Francisco market, and hundreds currently available for sale, there is no longer a need to sacrifice rental housing in exchange for “homeownership” opportunities. In contrast, nobody is building rental units for the middle or working class, so it makes more sense than ever to protect our existing supply from conversion.

Given Mayor Newsom’s veto of even the mildest attempt to reduce rental conversions (the disclosure ordinance), activists will have go to the ballot in November to protect middle-class rental housing. There are many possible initiatives that could serve this goal, and multiple measures may be necessary.

Thanks, New York City, for providing a glimpse of a future that San Francisco must strive to avoid.