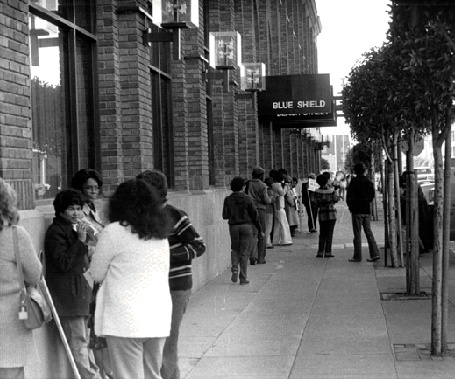 A SF office workers strike reflected the tensions of 1981

“”Ten years from now, unless we adopt some sort of policy to insure income integration, we will crowd out all the middle-income people. I think San Francisco is going to become a very rich living area, a lot of single and retired people who have money, executives who work down in the financial district. It’s going to be very difficult for a nonwealthy person to live here.— Dr. Kenneth T. Rosen, UC Berkeley Center for Real Estate and Urban Economics, June 9, 1981 NY Times

Reading Wayne King’s June 9, 1981 New York Times story from today’s perspective (“CHANGING SAN FRANCISCO IS FORESEEN AS A HAVEN FOR WEALTHY AND CHILDLESS”) is  illuminating. It explodes the myth that San Francisco’s current housing crisis is a product of a post 2011 “tech invasion” and shows instead that this crisis has been long in the making.

Bill Witte, then deputy director for housing in the city’s Office of Community Development and currently the President and CEO of the housing developer Related California, explained in the 1981 article that ”What is happening is that San Francisco is losing people, but it is gaining households. It’s a net loss of people, a net gain in households, so there is more pressure on the housing market and more pressure on the people who can least afford it.”

In 1981 San Francisco had th highest housing costs in the mainland United States. Witte observed, ”This city dwarfs anything I’ve ever seen in terms of housing prices.” The city’s housing crisis was already causing an “exodus of the middle class” and a 10% decline in African-Americans from 1970-1980.

UC Berkeley’s Rosen’s caveat on his dire warnings for San Francisco’s future—that the city needed to adopt policies to insure income integration—was widely shared by activists. In fact, by June 1981 progressives had already won the enactment of rent control and eviction protections (though with many loopholes) and strong restrictions on condominium conversions (imposing a six-unit size limit and an annual quota).

1981 also saw passage of the city’s Residential Hotel Conversion and Demolition Ordinance (the HCO). This law proved particularly crucial as it came when SRO (single-room occupancy) hotels were widely seen negatively, and demolitions and conversions of SRO’s were imminent.

The Tenderloin was the affordable San Francisco neighborhood potentially most at risk in 1981, and actions that year helped change its history. As I detail in my book, The Tenderloin: Sex, Crime and Resistance in the Heart of San Francisco, in 1981 Tenderloin activists won an historic victory in their battle with three luxury hotels and submitted a new land use plan to the city that led a major rezoning of the neighborhood.

In 1981, few foresaw a Tenderloin neighborhood located adjacent to Nob Hill and Union Square as escaping gentrification. But because residents organized and got policies enacted to protect the neighborhood’s primarily low-income status, the Tenderloin’s future was set on a different course.

Activists in 1981 were also pushing hard for downtown development limitations and rent control on vacant apartments. Since new office development was not accompanied by newly built housing, a supply crisis resulted that drove up rents and evictions (sound familiar?) Yet it took until 1986 for voters to approve restrictions on development (Prop M), and by then the Manhattanization process was nearly complete.

Similarly, as I recently discussed in “Blame Realtors for SF’s Housing Crisis,” support for vacancy control was the issue that set San Francisco “progressives” apart from “moderates” throughout the 1980’s. It was the defining issue in every supervisor and mayoral election through 1991. Yet because Mayor Feinstein twice vetoed vacancy control, it was ultimately preempted by state law and is not a tool San Francisco can use to control skyrocketing rent hikes today.

Unlike today, the early 1980’s did not see battles over market rate housing. There were controversial individual projects, but activists focused on new highrise offices, not housing.

But in order to maintain Westside support for downtown development, Feinstein backed the downzoning of residential neighborhoods throughout the city. This created the hurdles to new housing development in low density neighborhoods that Mayor Lee is now trying to overcome.

Housing development was so paltry during the Mayor Frank Jordan years (1992-1995) that there was broad support for legislation authorizing the construction of live-work lofts. When the late 1990’s dot-com boomed turned this housing type into a symbol of Mission gentrification, the city’s eagerness to encourage such housing (which was exempt from the inclusionary housing law) was forgotten.

I understand that arrivals to San Francisco in the past decade see the skyrocketing housing price increases of the past few years as extraordinary. And oldtimers have fond recollections of the 1970’s through the pre-dot com 1990’s, when some affordable homes and rental units could still be found.

But San Francisco has been a very expensive city since the wave of urban gentrification hit the city in the late 1970’s. When I arrived in 1979, Noe Valley, the Castro, and the Haight-Ashbury were already gentrified as was the Mission District west of Valencia Street. In 1989 a three-bedroom house in Noe Valley cost $1.6 million in today’s dollars. That may be a lot less than they go for today, but that was a sales price that only the rich could afford in 1989.

Activists of the 1980’s understood that San Francisco could only avoid becoming a city for the elite and subsidized poor by taking housing off the speculative market, strengthening rent control and eviction protections, and preventing the demolition or conversion of rent-controlled housing. But for local political opposition and state law preemption they might have succeeded.

And for all the understandable doom and gloom talk today, the struggle to make San Francisco as economically diverse as possible continues.