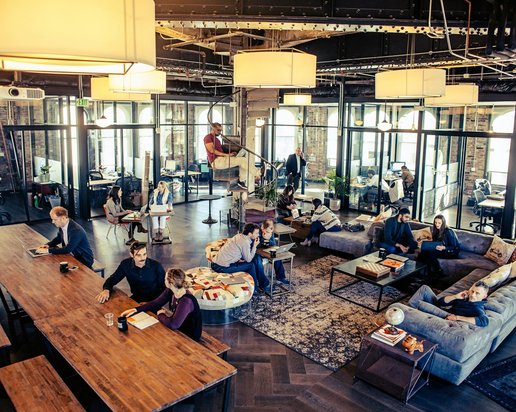 Calcanis and other tech entrepeneurs rent at WeWork at 25 Taylor St.

It is clear from the August 17 story’s headline, “When Tech Came To the Tenderloin,” that NY Times deputy tech editor Quentin Hardy needs a geography lesson. After all, none of the prominent tech companies mentioned in the article operate in the Tenderloin; they are all in Mid-Market, a very different neighborhood with a very different history.

Hardy tries to get around the lack of big tech companies in the real Tenderloin by creating a fictional Mid-Market that “includes the Tenderloin and South of Market, or SoMa neighborhoods.” He turns three distinct neighborhoods into one. He combines these communities even though his article focuses on the Mid-Market/ Tenderloin tax credit, which did not cover SOMA.

Would Hardy have conflated Noe Valley, Glen Park and the Castro into a single neighborhood? I doubt it. Affluent neighborhoods get their own identity.

It appears that Hardy saw a geographic area including a lot of poor people and decided to place them all in a single overarching neighborhood, a fictional “Mid-Market.” He could have written how Mid-Market’s tech arrival has specifically impacted the adjacent neighborhoods of the Tenderloin and SOMA, but chose not to do so. Instead, he treats SOMA as if it were the Tenderloin. He starts and ends his story discussing Carlo Gascon and the United Playaz, even though their building  at 6th and Howard is far from Mid-Market and further from the Tenderloin

When I pointed out to Hardy that the Tenderloin and SOMA were not a subset of Mid-Market, he tweeted “Mid-Market, in general consensus, covered both areas as well as changes at the fringe, like NEMA. But, enjoy your categories.”

I wonder how Hardy arrived at that “general consensus.” But it meant the independent neighborhood histories of the Tenderloin, SOMA and Mid-Market were reduced to “categories.”

The Tenderloin has had strong coverage in the NY Times, but this characterization of historic San Francisco neighborhoods is simply false. Even worse, Hardy’s geographic misinformation became the foundation for a even more off base follow-up blog post in the Times by Pui-Wing Tam.

In a clear testament to  the geographic confusion caused by Hardy’s article, after Hardy wrongly put the Tenderloin in Mid-Market his colleague Pui-Wing Tam erroneously states that Twitter and Zendesk are in the Tenderloin.

Tam’s misreading of Hardy’s article takes us even further from geographic reality. Tam concludes from Hardy’s piece juxtaposing a Sixth Street hotel charging $65 a night and a tourist hotel on 7th Street charging $460 a night that this dramatic evidence of the inequality gap is occurring in the Tenderloin.

That’s completely false. Neither hotel, nor this picture of income inequality, is in the Tenderloin. Tam was obviously as confused as other readers by where Hardy was siting his talking points.. So after Hardy’s story labeled three distinct neighborhoods as “Mid-Market, ” his colleague added to the error by wrongly placing major tech companies and the two SOMA hotels in “the Tenderloin.”

Unfortunately, these errors have consequences. When we Google “Tenderloin,” the name of these two SOMA hotels will now appear due to the high profile presence of the Times‘ blog.  Google will also echo the false claim that the Tenderloin is the poster child for inequality. even though in the real world the Tenderloin has far, far less inequality than SOMA or Mid-Market.

Hardy’s core conclusion—that tech’s arrival in Mid-Market has meant little to the Tenderloin—is as wrong as his geography.

As I describe in my book, The Tenderloin: Sex, Crime and Resistance in the Heart of San Francisco, the Tenderloin has seen more private investment in the past three years than in the preceding three decades. The Tenderloin has a sparkling new museum, a new theater/bar (PianoFight), and the soon to open CounterPulse dance, art and cultural space.

New restaurants and bars are under renovation in multiple Tenderloin locations. Housing is slated for long vacant parking lots. The nationally recognized 826 Valencia writing program and retail store will soon move to Golden Gate and Leavenworth.

Given all the local and national publicity that the Tenderloin Museum opening received (including in the NY Times), it’s exclusion from Hardy’s story is surprising. As was his failure to mention 826 Valencia, whose bringing of a kids program into the Tenderloin challenges his negative assessment of the neighborhood.

It’s not news that the Tenderloin suffers from public drug dealing. Or that people needing mental health assistance are on its streets. But there is far more to the 31-block Tenderloin neighborhood than these problems.

Hardy does not even acknowledge that the neighborhood is a National Historic District, with 409 buildings on the National Registry of Historic Places.

It is too bad Hardy did not read Cory Weinberg’s SF Business Times story earlier this month, “The Tenderloin’s Moment of Truth.” Weinberg identifies much of the new investment that has come to the Tenderloin since tech came to Mid-Market, without shying away from the neighborhood’s challenges.

Hardy’s walk through the Tenderloin “was interrupted when Jason Calacanis, an Internet entrepreneur and early investor in Uber, stepped out from his Tesla.” Hardy reports Calacanis’ negative view of the neighborhood: “In good conscience, I cannot have my employees here. There is a false narrative that it is getting better here. I’ve seen stabbings, people defecating in the street.” Hardy reports that Calacanis “is relocating to San Francisco’s Financial District.”

Hardy does not cite a single Tenderloin business owner or investor to refute, question or even confirm Calacanis’ account. After reading the article I checked Calacanis’ twitter account (@Jason) and saw he was sending denigrating messages about the Tenderloin to his 239,000 Twitter followers.

This led me to tweet him to find out where his business was in the Tenderloin, a key fact omitted in the article. Although the self-proclaimed “angel investor” lives on social media, he did not respond. Nor did Hardy respond to my inquiry about Calacanis’ business location. Hardy essentially said it did not matter whether Calacanis’ business was in the actual boundaries of the Tenderloin, since the entire neighborhood was all part of Mid-Market.

There is only one place in the entire Tenderloin neighborhood where Calacanis’ thirty-person company could have operated, the WeWork building at 25 Taylor Street. That’s because, contrary to the story title and the second-page headline, “When Silicon Valley Arrived in the Tenderloin,” the Tenderloin has little office space for large tech employers.

A visit to WeWork at 25 Taylor Street confirmed that Calacanis’ Launch Media rents space there. Now that we know what part of the Tenderloin Calcanis was indicting, here is what Hardy’s story did not tell Times readers about the area surrounding 25 Taylor:

*the exterior of the adjacent building at 55 Taylor has been completely renovated. The retail spaces are undergoing over one million dollars of renovation, and by early 2016 will be the home of renowned chef Daniel Patterson’s new organic, low-cost fast food restaurant, Loco’l.

*directly across the street from 25 Taylor is a long vacant block for which the 950-974 Market project is in development. The thirteen story project includes 310 residences and 250 hotel rooms, and here are the current renderings. The Turk and Taylor stretch has dramatically improved in the past year, directly at odds with Calcanis’ assessment.

*a new bar is expanding at the northeast corner of Turk and Taylor, and the complete renovation of the long rundown Warfield Hotel has begun;

*CounterPulse is undergoing renovation and opens at 80 Turk in October, a stone’s throw from Calcanis’ current offices;

*Garden Creamery ice cream shop is in final negotiations to lease the long vacant northwest corner of Turk and Taylor, at the site of the 1966 Comptons Cafeteria riot.

There is no “false narrative” about the Tenderloin’s progress in the area surrounding Calacanis’ offices. The above projects and others are real. What’s false is Calcanis’ understanding of what’s happening in the neighborhood, which likely reflects his disconnection from all the community efforts to make progress.

Had Hardy talked to Neveo Mosser, owner of 57 Taylor, or other investors more knowledgeable about the Tenderloin, he would have gotten a very different perspective on the area’s future.

I was told that Hardy visited the Tenderloin Museum a few weeks ago but stayed only a brief time. I would like to invite him for a return visit and neighborhood tour (he’s currently teaching at UC Berkeley). I hope he would appreciate learning  facts about the Tenderloin’s past and future that his August 17 article left out.