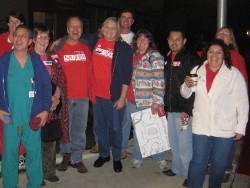 The National Union of Health Workers (NUHW) has won a landmark victory over SEIU for the right to represent non-union workers at Santa Rosa Memorial Hospital. The vote was 283 for NUHW, 263 for No Union, 13 for SEIU, with 17 challenged ballots. The challenges are not expected to alter the outcome.

NUHW has now won organized labor’s biggest hospital election victory of 2009, overcoming a joint “No Union” campaign mounted by management and SEIU. SEIU’s full-page newspaper ads, mailers, and visits to workers resulted in a per vote cost greatly exceeding that of New York’s Mayor Bloomberg, who at least won his election. Many factors led to NUHW’s win, ranging from a strong worker committee, to active support from the North Bay Labor Council and area religious leaders. Former UFW activist Fred Ross Jr., who spent much of the ten days prior to the election helping NUHW, saw in the victory a parallel to the UFW’s success against the well-financed Teamsters in the 1970’s: “NUHW had dedicated organizers surviving on stipends and living off the land through meals from workers and community supporters; SEIU had folks flown in from Ohio and elsewhere who had no real commitment or connection to the workers.” The UFW connection was heightened when Dolores Huerta visited workers on the first evening of voting, and then returned to the hospital at 6:00am the next day to urge the morning shift to back NUHW.

I’ve sat through a lot of election cliffhangers, but the scenario at Santa Rosa Memorial Hospital as the votes came in last Friday night was almost surreal. With nearly a third of ballots counted, NUHW and No Union were tied at 160 with SEIU at 13. The NLRB then changed the way the votes were counted, so that instead of announcing votes one by one randomly, they had separated the votes for each side into piles and then delivered the results – without telling the crowd outside the overflowed counting room about this change.

So when NUHW leaped to a 220-160 lead, its supporters – which comprised the entire crowd – assumed that the votes of certain pro-union departments had come in, and that victory was at hand. But it seemed odd that “No Union” had not picked up a single vote, and the crowd soon learned that the NUHW pile was being counted ahead of voters rejecting any union.

Once the “No Union” votes were announced, NUHW’s lead fell to 248-245. “No Union” then went ahead 263- 250, and many thought all the NUHW ballots had been counted and that defeat was imminent (apparently management inside the counting room reached the same conclusion, and was ecstatic.)

But as if from a contrived television movie ending, the last batch of announced ballots went 33-0 for NUHW, bringing shrieks of joy to the crowd. NUHW had done what many saw as impossible, defeating powerful anti-union campaigns from three forces: the “Memorial Bridge” committee of anti-union workers, management, and SEIU.

Since the challenged ballots involve the NLRB’s questioning employees’ hiring date for voting eligibility, both management and NUHW sought prompt resolution after Friday night’s count. But SEIU refused, stating it “was not prepared to resolve the challenges at this time.”

So while the NLRB will not likely certify the victory until January, SEIU’s delaying tactics will not change the outcome. NUHW now heads to Los Angeles with momentum for elections against SEIU at Kaiser hospitals in January, and some of its Santa Rosa organizers left for LA immediately after the vote count concluded.

As Fred Ross, Jr.’s quote above indicates, NUHW out-organized, out-strategized, and out-worked SEIU. But it became abundantly clear as I watched Election Day events that the main reason for NUHW’s success was this: pro-NUHW workers and staff wanted it more. SEIU gave no impression it ever cared about SRMH workers, using them as mere cannon fodder in its larger war against NUHW.

Pro-NUHW workers desperately wanted to be part of a democratic union, and the NUHW staff – unlike SEIU’s Ohio-based leader who was only in Santa Rosa because he was assigned there – were involved in the campaign because they so truly believe in their mission that they have effectively worked for much of 2009 as volunteers.

Anyone talking to Gabby Martinez, a NUHW supporter at St. Joseph’s Mission Hospital in Orange County who spent the last two weeks on the campaign, soon realizes that this fight in Santa Rosa was not about money. Nor was it about power or ego. Rather, it was about workers passionate for respect, dignity and fairness in the workplace.

That’s why SEIU’s relentless attacks on NUHW leader Sal Rosselli, and his allegedly “corrupt” allies, fell flat. SEIU never focused on what workers cared about, while NUHW spent all of its time focusing on how a union could help workers lives.

The North Bay Labor Council understood that it was NUHW who truly cared about the workers, which is why it urged SEIU to leave the campaign.

Having written a book praising SEIU for adopting the UFW strategy of building community and religious alliances, I know of no campaign prior to Santa Rosa where SEIU expressly fought their usual allies. This alone should have told SEIU leadership that it was on the wrong side of this fight.

A Disaster for SEIU

After a relentless campaign attacking NUHW, its staff, and its very right to call itself a union, SEIU lost 283-13 among workers desiring a union. It’s going to take a heckuva spinmeister for SEIU to explain to workers in other hospitals why they should trust SEIU over NUHW when those at SRMH clearly did not.

SEIU’s brand is badly tarnished in California, both from its fight against NUHW and its failed struggle against UNITE HERE. The union has alienated multiple local labor councils, threatened John Burton (the state’s leading progressive and union hero), and is burning bridges with the religious community.

SEIU paid a steep price for its all-out campaign in Santa Rosa, and should have withdrawn from the election months ago, as many urged. Now, it has undermined its ability to compete against NUHW for the nearly 9000 other non-union workers in the St. Joseph’s Health System chain, and will be under statewide pressure to withdraw from contesting NUHW’s organizing rights in these facilities.

How does a union spend that much money and only win 2% of the total vote? And only 2% despite multiple attack pieces on NUHW, while the victorious union only could afford a single glossy leaflet during election week (the NUHW piece was designed at no cost by San Francisco political consultant Eric Jaye, and explained why workers needed a union and only referenced SEIU as a purple grinch in the corner)?

NUHW spokesperson Jon Borsos thinks he has the answer. He described NUHW’s win as a “tremendous victory for democratic unionism, as health care workers stood up to corporate health care and to corporate unionism.” Longtime SRMH union supporter Nancy Timberlake echoed Borsos, adding “to win against a behemoth like SEIU and our employer’s own anti-union campaign is true vindication and a true miracle.”

Tis the season for miracles, something SEIU also overlooked when it successfully delayed the election until a week before Christmas.