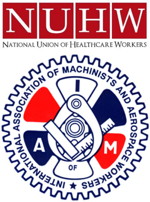 It surprised many when the National Union of Healthcare Workers — a quintessential service sector union — announced in February its intent to affiliate with the Machinists, which has an extensive industrial union history. Details are still under discussion, but an alliance would ultimately bring over 9,000 NUHW members together with 720,000 IAM members. The announcement came at an important juncture for NUHW, which was born in 2009 after the Service Employees drove out key activists and leaders from its 150,000-member United Healthcare Workers-West local in California during a battle over democracy and local autonomy. NUHW ran against SEIU in 2010 in elections for 43,000 service and tech workers at California’s Kaiser Permanente hospitals and lost. But a labor board ruling last year confirmed that Kaiser had colluded with SEIU during the election, and the board ordered a re-run. Now NUHW will enter the field with strong backing from a powerful AFL-CIO ally.

Carl Finamore: Where did the idea to affiliate come from?

Don Crosatto: I was always very much aware of the dominant presence of SEIU-UHW in successful organizing, bargaining, and community coalition building in California. They had the gold-standard contract in the health industry, had very active steward participation, and were the fastest-growing union in California. Their record stood out. After they were kicked out of SEIU and formed NUHW, I saw that same leadership continuing to run impressive campaigns, but this time on a shoestring budget.

Stands to reason, I figured, that they would be thinking about linking up with an organization with resources.

Of course, some will think this relationship with the IAM is strange because we do not have much experience in health care. But NUHW has that part pretty well figured out; they do not need that from us.

They need to be part of a larger organization that values local autonomy and that does not micromanage from headquarters in Washington, D.C.

CF: How did the consultations develop?
DC: I knew former SEIU-UHW President Sal Rosselli for 20 years and asked if he wanted to talk with Gary about how we view local autonomy and democracy. There were intense discussions for a couple months that included our international president, R. Thomas Buffenbarger, and the international’s nine-member executive council, that ultimately led to a letter of intent to affiliate.

Gary Allen: The thing that moved me was blatant abuse by SEIU of basic union democracy against duly elected SEIU-UHW leaders over disagreements on bargaining priorities and organizing.

Unfortunately, this was not a complete surprise. It’s my opinion that over the last several years, SEIU chose growth at all costs, negotiating future organizing access instead of bargaining standard-of-living increases for their members.

In the IAM, decisions about collective bargaining priorities are left to our members.

CF: What were the first reactions of the IAM?
DC: Health care is not one of our bread-and-butter industries and most of our leadership is not in California. So, most IAM leaders did not really know the players up close. However, we found our general philosophies are pretty much the same.

We both believe members should drive negotiations by selecting the bargaining committee, developing contract demands, and ratifying agreements. In addition, the IAM is not in the habit of forcing consolidations into mega-locals, with smaller locals giving up their independence as demanded so often by SEIU.

CF: What does the IAM think it will get out of this relationship?
GA: It would be disingenuous to say we are not interested in thousands of new members or that we do not appreciate the value of becoming a major player in the rapidly growing health care industry. But an even bigger benefit for the IAM is NUHW’s huge pool of organizing talent.

DC: We definitely hope their example and experience will energize our locals to organize more, which, frankly, we can use.

CF: How will NUHW benefit?
DC: Of course, NUHW needs resources to go after bigger targets like Kaiser.

But, as its name indicates, NUHW is a national health care union. Our organizing perspective is not about picking SEIU apart but about organizing vast areas of the unorganized.

SEIU is much bigger, but most of their members are concentrated in New York, Illinois, and California where, for example, they have 700,000 members.

SEIU is not present in large sections of this country. The IAM’s extensive geographic presence is an enormous advantage, especially in the South. We do not have tens of thousands of members in these states but we do have a presence. Instead of blowing in with a blizzard of purple shirts, our organizers get introduced by IAM members who not only lived and worked in that community but whose parents have also lived their whole lives in that community. Being introduced as a good guy by these deeply rooted local folks matters in small towns.

Sal Rosselli: With the IAM located in every state in the union and in every province of Canada, we have a tremendous opportunity to organize. Most hospital workers in this country are not in a union—a whopping 90 percent of them, or 9 million in all. It’s great that the IAM shares our vision and confidence about national organizing.

CF: How will this all affect the upcoming Kaiser NUHW/SEIU representation election involving 43,000 employees?
SR: Well, IAM resources will hopefully make it easier for us to communicate to the 10,000 folks we could not even reach last time.

But the Kaiser campaign this year is fundamentally different in two other huge ways.

First, Kaiser has shown its true colors. In the last election, we could not very effectively criticize Kaiser because the good relationship with the old SEIU-UHW built up over the years produced the best contracts in the industry. This was still fresh in everyone’s mind. Today, it’s the opposite. Kaiser is trying to jam through concessions despite their enormous profits. This has angered thousands of workers who previously trusted Kaiser.

Secondly, SEIU-UHW has changed. In 2010, we were a brand-new organization and it was difficult to explain our differences with SEIU. Not true today. SEIU has failed to pursue grievance complaints and, at the same time, caved to numerous concessions dictated by Kaiser and other hospitals.

By contrast, in the last year and half, NUHW has settled half a dozen contracts with no takeaways, proving by example that you can avoid concessions and even gain some improvements if you stand up to the employer.

Along with our new relationship with the IAM, these are things that, I believe, make a huge difference this time around.

CF: How has SEIU attempted to discredit IAM-NUHW cooperation?
DC: We don’t see ourselves as a raiding organization, definitely not. NUHW folks originally had a great union and they were essentially kicked out by their international leadership. What were they supposed to do? Disappear?

SEIU is mailing letters to IAM and AFL-CIO officers, showing up uninvited to IAM meetings, and mailing flyers to their Kaiser members, warning to be on the lookout for IAM reps “invading” work areas. But what about their flagrant raiding war only a few years ago against California nurses, or when they actually tried to split apart UNITE HERE? SEIU is overdosing on hypocrisy.

CF: What was the AFL-CIO’s reaction?
GA: SEIU offered a no-raid agreement to AFL-CIO President Richard Trumka if the IAM abandoned NUHW, so you know they are trying to apply lots of pressure. Get back into the AFL-CIO, Trumka frankly told them, and we can discuss all your concerns.

CF: Why is SEIU taking such a hard tack?
GA: It is sad to see in a very short period of time this innovative West Coast SEIU-UHW union become so top-down. A union cannot sustain itself if the members do not want you.

This is the dilemma SEIU-UHW is facing. They are losing membership support. It explains why they are so willing to trade member benefits to curry favor with health care giants like Kaiser who extend to SEIU organizers illegal advantages to influence elections against NUHW.

There are many battles ahead to gain democratic and militant representation for health care workers and I see the IAM working hand in hand with NUHW to help them achieve these goals.

This article is reprinted from Labor Notes, http://labornotes.org/blogs/2012/07/nuhw-machinists-alliance-whats-game-plan. Carl Finamore is a delegate to the San Francisco Labor Council. He can be reached at local1781@yahoo.com. Appreciation to Patricia Valencia for arrangements.