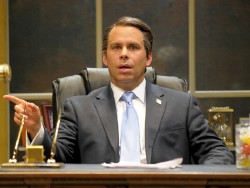 NOVEMBER IS ON FIRE — AND THEY ROAST POLITICOS

DAVID MAMET’S PLAY “NOVEMBER” IS A FARCE that is probably more “true” than not. Just what does go on in the Oval Office? It could be like this: It’s November in a Presidential election year. The current sitting Prez is facing an election that looks like his chances are not good. His approval ratings are way down, his money’s run out to pay for TV Ads, and nuclear war might be right around the corner. His staff has more or less given up on him. Why, cause he’s basically a moron.

In this play every ethnic group that you can think off is insulted in the Oval Office. This Prez seems to be a melding of Nixon and Bush – and where there is humor, there is truth coming out of the Oval Office. What insight David Mamet has. He has written one of the most profoundly, laugh-out-loud plays that I have seen in many years. His talent for words is irresistible. The audience at A.C.T. was bent over with hysterical laughter.

November has everything you could want in a play. It’s wiz-bang entertainment that gives us a mercilessly funny account of what may go on in the Presidents lofty Oval office. Is it myth or reality? I’m going with the latter. The first ACT opens with presidential sounding music – The second act opens with music that sounds like it came from a Bad Betty Davis movie. What Fun! There are surprises with the set that are just great. And who could not be delighted with the Lesbian staff member who went to China to adopt a child, who she names after the President of the U.S. She asks the Prez to marry her and her female partner. At first he balks – but figures that maybe he can get some mileage out of it.

The actors in the play are dazzling. Every gesture and every glance has that haunting look. As the Prez says: “Everyone is on the take!” And he adds later. “Why not me!”

NOVEMBER JUST SIZZLES with Andrew Polk as the Prez, Anthony Fusco, his assistant is just great as the quite, but wiser man in the Oval Office. (Fusco looks like Bob Newhart). Here’s one of his lines to the Prez: “We can’t build the fence to keep out the illegal immigrants.” Why Not – asks the Prez. “Because we need the Illegal Immigrants to build the fence.”

Talking on the phone to the Israel Government, the Prez says: “Look, you people got along without a Country for 2000 years – you’ll be fine!” And he hangs up! Ain’t politics grand?

Manoel Felciano is fabulous as the representative of the National Association of Turkey and Turkey By-Products Manufacturers. Rene Augesen is a hoot as the Lesbian staffer who has a cold. They think she has ‘Bird Flu’. Steven Anthony Jones comes in near the end. He is a leader of an Indian Tribe – and he naturally wants something from the Prez. Yes, the Prez puts him down. Jones is fantastic.

The Direction by Ron Lagomarsino is truly remarkable.

Pat Hodges as Mrs. Whitney at the Magic Theatre.

AH, HOW WE PINE ABOUT LOST LOVE. How quickly we forget why it didn’t work out the first time. Well, Mrs. Whitney has decided to give it another try with her ex-husband. So, she looks him up in the phone book. When she barges into his house she is greeted by his present wife, who fills the Ex Mrs. Whitney about all the many wife’s he has had in between the 1st and the one that she is talking to now.

This is more-or-less a sequel to the other Kolvenbach play Goldfish. It is five years later – and a less strident Mrs. Whitney has aged gracefully, but she longs for the embraces of her Ex. Whether this is a good idea or not – she manages to get him back, in spite of the fact that she knows that he will pull some of the same old disappearing acts that he did in the past. But, he was younger then. Now, he has lost some steam, gave up drinking – this time it just might work.

While the play has its laughs – it is not nearly as strong as the first Kolvenbach’s “Goldfish”. (Reviewed on beyondchron.) That was a powerhouse that also starred Rod Gnapp, who is deliciously funny and difficult not to like. Mrs. Whitney (Patricia Hodges) is called Maggie. You know, like Maggie the Cat from “Cat on a Hot Tin Roof”. In the first play Mrs. Whitney is a Bitch. The 2nd – not so much. I liked her bitchy side better.

I know it gets confusing trying to put the two plays together. So if you do go to see it, try the Marathon that features both plays in tandem on Nov. 6, 7. At the Magic Theatre in Fort Mason.
RATING: THREE GLASSES OF CHAMPAGNE!!! –trademarked-

CREATURE IS ‘A TRIUMPH!’

WE ARE USED TO SEEING A DUMB, INARTICULATE BEAST AS THE FRANKENSTEIN MONSTER – but that is not what Mary Shelley had in mind. No, her vision was of a sensitive, but perhaps horrifying creation that tried to fit into the life of the humans around him. They rebuff the Monster and his loneliness turns to rage as he does some pretty bad things. Like snapping the head off of someone.

Young Dr. Frankenstein gets interested in the works of alchemists. He longs to discover the fabled elixir of life. Later he develops an interest in chemistry. In fact he becomes obsessed of the idea of creating life through artificial means.

So, he assembles a humanoid creature by stitching together pieces of human corpses. Frankenstein succeeds. He manages to create a person. But — not the person that he had hoped for. It apparently is not handsome enough for him – so he abandons the creature. Other mishaps and cruelty happen to the creature, and he swears revenge.

He kills Frankenstein’s new bride, as well as his best friend, Henry Clerval. “The Creature” was a 1940’s radio play, and it was also done as a podcast in 2006 and 2007. What we get on Thick Theatre stage is a fascinating blend of Theatre and Orson Welles type Radio Drama.

What is unique about this Monster is that he is not really repulsive. He is intelligent. As Dr. Frankenstein says: “He speaks like a man. My God. It evens read Milton”. You notice the putdown. Frankenstein does not give him the courtesy of calling him a man. He refers to “The Creature” as IT throughout the play. No wonder he got upset. Would you like to be called “It” all the time? I’m on the side of the Monster. Get Frankenstein.

James Carpenter lights up the stage, just like Dr. Frankenstein gave him the electric spark right from the beginning it continues, never dying down. He dominates the evening.

Also giving Power House performances are Gabe Marin (Frankenstein) and Garth Petal (Captain Walton). Rob Melrose directed with extraordinary flair. And Trevor Allen has brought to the stage a new titanic view of “The Creature” – one that will remain on our minds for a long, long time.

FLICKER BITS – A FILM EXTRA: BRONSON IS IN TOWN, AND HE’S MEAN

BRONSON the movie that opens on Friday, Oct. 30 at the Lumiere Theater certainly will frighten, repel and fascinate.

BASED ON A TRUE STORY: It was 1974 when a hotheaded and crazy guy (Michael Peterson) wants to make a name for himself. He is a 19 year old at the time. To get the attention that he pines for, he takes a homemade sawn-off shotgun and robs a post office. He did make a name for himself and landed in prison for a 7-year term.

However the young man (played by Tom Hardy) keeps getting into trouble, even while he is in prison. He does terrible brutal things to other prisoners – even to people that work at the Prison, who try to help him. Without any indication, all of a sudden he will try torture or kill any living thing near him. He is known to be England’s most violent prisoner – and also England’s longest prisoner in continual custody. Most of the time in prison, 30 years were spent in solitary confinement. And much of that is in the nude. Yes – Michael Peterson was proud of his muscular body.

As sadistic as he is he seemed to revel in hurting people. He remembers the movie “Death Wish” that starred Charles Bronson. Someone tells him that he should change his name to Charles Bronson – since he has a Death Wish. And so he did. He became (in his mind) a superstar. He became Charles Bronson. The more hideous and outrageous things that he did only gave him more press and more notoriety.

Yep, he spent a total of 34 years in prison. Four of those he was more or less free to associate with other prisoners. But, he couldn’t wait to strangle, choke and stuff things in their mouth and confine them with duct tape – so that he could torture them. In Art Class, he did this to the instructor and even put white paint in the instructor’s eyes. The prison attendants couldn’t get to him, because he had locked the door from the inside.

Artistically, this is an extremely thrilling film. Also, it is very, very violent and may shock you beyond belief. In a way the film is beautiful to look at – even the violent scenes are artistic.

Denmark native Nicolas Winding Refn’s is known for pushing boundaries with over the edge grit. Well, they can’t get any grittier than “Bronson”. I would say – “It is shocking – but mesmerizing!”

Bronson is everything to keep you on the edge of your seat. It is Riveting – Gripping seismic drama! And exciting! The film photography is jaw dropping. Looking for High Voltage? Well, this is it. I may see it again with a friend – just so I can watch him squirm. Tom Hardy (Michael Person/Charles Bronson) will be in huge demand for other films. He gives one of the most engrossing powerful performances I’ve seen this year.

NOW PLAYING AT THE LUMIERE THEATRE AND OTHER LANDMARK THEATRES.