Notes From My Purple State: Brownback for President 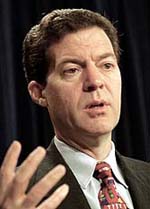 In mid-December, Senator Sam Brownback (R-Kansas) got another boost to his long-shot presidential bid. His name is Tom Monaghan and he’s worth millions. Already, in November, the defeats of Senators Rick Santorum and George Allen, both right-wingers with their eyes on the White House, as well as Bill Frist’s recent decision not to seek the presidency made Brownback’s prospects a little brighter.

Call it thinning the field. Monaghan’s entrance, however, is something qualitatively different in its direct benefits for the Brownback presidential bid.

Monaghan, who founded and then sold off Domino’s Pizza, netting him a billion dollars, is a conservative Catholic financier known for starting the doctrinaire Catholic University, Ave Maria, in Florida. “In the Catholic community, he’s looked upon as kind of on the fringes,” the Rev. Robert Drinan, a Roman Catholic priest, told the Kansas City Star. “The world view is, ‘We have to get back to a Catholic civilization.’ They want to go back to a Christian society imposed from above.” Sound like a scary ally for a potential President of the United States? Well, folks, meet Sam Brownback and his illustrious company.

Brownback himself is a straight-laced, short-haired, man-of-the-house sort from the farmlands of Kansas. He was born in Parker, Kansas, where he grew up on the land his parents still farm. His ambitions shown fierce and early: in high school he led his school’s chapter of Future Farmers of America (FFA) and at Kansas’ more right-leaning public University, K-State, Brownback rose to the rank of Class President (he did the same at KU’s Law School). Eventually, he served as Bush I’s Agriculture secretary before being elected in the so-called Republican Revolution of 1994 to the U.S. House. In 1996, he took Bob Dole’s Senate seat, a position from which he’s been wheeling and dealing ever since.

But there’s more to Brownback than his trajectory through politics. Brownback is a religious man determined to sniff the scent of many versions of the Christian Gospel. After a stint as a Methodist, he donned Evangelical garb in the mid-90s. Apparently, neither was a good enough fit: In 1996, Brownback fell under the spell of Rev. John McCloskey, an anchor at the right-wing Catholic organization Opus Dei. He was baptized a Catholic “not in a church but in a chapel tucked between lobbyists’ offices on K Street that is run by Opus Dei,” writes Jeff Sharlet in Rolling Stone.

To put Opus Dei in perspective, consider this: it was founded by a Catholic priest who argued for “holy coercion” and, consequently, believed Spanish tyrant Francisco Franco to be an appropriate example of good Christian leadership, in a worldly government, that is. Brownback’s connections to fringe-right-wing Catholicism run even deeper: Brownback has spoken widely to Legatus, a lay organization of Catholic CEOs committed to right-wing social causes. Legatus, with 5,000 members, is filled with friends—and better yet for Brownback, friends with deep pockets. Brownback’s association with Monaghan begins to make sense.

And so do the policies Brownback regularly spouts off about: his positions, across the board, put him at the far-right edge of the Republican spectrum. This means, for instance, that when Brownback came to Congress in 1994, he would immediately advocat the slashing of the Departments of Energy, Education, and Commerce. He would also refuse to sign Newt Gingrich’s Contract for America because, astoundingly, it didn’t go far enough.

His opposition to abortion is still (and always will be) his mainstay, but don’t let that fool you: this hack favors just about everything that common-sense Americans oppose, and vice versa, when it comes to healthcare, the war in Iraq, energy policy, environmental protection, and tax cuts. Brownback said recently, for example, that he believed Washington, D.C. ought to be a “laboratory for a flat tax”—a pilot project for a tax-cut program that he would one day like to impose on all of America. “Tom [Monaghan] doesn’t want to be associated with anyone who’s going to compromise,” Deal Hudson, executive director of the Morley Institute for Church and Culture and a friend of Monaghan’s told the Star. “That’s why he’s getting behind Sen. Brownback.” The Senator, after all, told a New York audience “this is about serving one constituent.” As he said it, he pointed skyward.

All of this makes Brownback’s run for president a lot scarier than most left-leaning pundits seem willing to admit. By 2008, Brownback might own the conservative base. If he does, the stakes will be higher than they’ve ever been—even higher, perhaps, than when Bush II ran in 2000 and 2004.

Abortion rights are the tip of iceberg for this colorful Kansan: his wish, in fact, is to be like the former Senator Jesse Helms, a veritable one-man wrecking ball constantly on a mission to fend off all forms of godlessness, from gay rights to environmentalism to feminism. “Like Senator ‘No’,” Brownback, referring to Helms, once told a group of Republican Businessmen when asked who he fancied himself after.

At present, Brownback is still a “second-tier candidate,” according to the Star—especially when it comes to fundraising. But with Monaghan’s support, as well as the support of big-money groups like Legatus and Opus Dei, that all could change. By the nature of his extremism, Brownback has all the makings of a sleeper candidate, the kind no one notices until he’s poised to claim the White House. Democrats can’t let the electoral success of 2006 blind them to the revenge that far-right elements will be looking for—are looking for even now, in fact—in 2008. For if America wakes up under Brownback, well…God help us all.