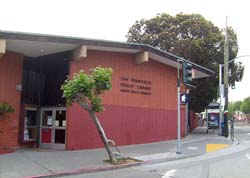 The proposed demolition of the historic North Beach library has ignited a firestorm of protest. Opponents include several powerful neighborhood groups, including Telegraph Hill Dwellers, and a host of preservation and good government associations throughout San Francisco.

This followed the Planning Department’s de facto designation of the Appleton &
Wolfard–designed library as a “historic resource,” triggering the Carey analysis and a full-blown environmental impact report (EIR). And scarcely had the EIR study begun when the National Trust for Historic Preservation signed on in favor of restoration and expansion of the building.

What’s more, the preservation community has joined forces to save all the Appleton libraries – be it from a cut-and-paste remodel, or the wrecker’s ball.

Now you’d think that would be enough for San Francisco Public Library (SFPL), but no. Stymied in their effort to manufacture consent for their controversial tear-down project in North Beach, SFPL has spent nearly $1 million to grease the skids, effectively pre-committing to a course of action months before the EIR is due for completion. Legally, that’s a no-no. (And that’s not even counting the sizable chunk of change being spent to close and “refurbish” adjacent Mason Street.)

The famed architects Appleton & Wolfard designed the North Beach library and seven others, beginning in the mid-1950s. Considered prime examples of the modern movement in architecture, the Appletons have recently been lauded by Architectural Heritage, Docomomo and the Preservation Consortium, to cite a few.

With their spacious interiors, ample use of natural light, beamed ceilings, handsome gables and overhangs, walls of windows and comfortable seating, the Appletons reflect the first stirrings of the egalitarian trend to build warm and welcoming libraries whose form embraces their function. (A sharp contrast, incidentally, to the window-challenged Triangle library plan, that even its key proponent called “a box with a top.”)

Fast forward to the 21st century. The voters approved a $106 million general obligation bond to fund modernization of 24 branch libraries. North Beach was due for a $3.5 million makeover and a moderate expansion, beginning around 2003. Ditto for the seven other Appleton libraries. In fact, an Architectural Heritage article at the time applauded the library’s plan to retain and enhance the Appleton libraries, all of which were deemed historically significant.

They still are, according to the new Historic Preservation Commission, which intends to consider a proposal to designate the group as a “non-linear, multi-property historic district.” Sources say the plan includes a look at landmarking the North Beach library.

Back in 2003, SFPL put the North Beach project on hold because of the battle over condos or open space on the three-sided parcel across the street (the Triangle). In fact, North Beach went to the end of the line. And whoops!, the money ran out. In fact, SFPL had racked up a deficit of nearly $50 million.

So the library got permission to issue revenue bonds to finish the job, paying them off with its generous set-aside. Armed with a now-bulging bank book, the library suffered a bad case of edifice complex (AKA scope creep). Instead of continuing with its stylish renovations, SFPL seemingly entered a demolition derby.

It calls for tear-down of North Beach and two other historic libraries (Ortega and Bayview) and erection of massive, hulking structures costing as much as $1100 per square foot. At over $900/square foot ($1300 if you add the money paid to buy the Triangle via eminent domain) the proposed North Beach library is a bulky two-story box that rises to 30 feet at the midpoint of a lot with an upward slope of 13 feet.

The structure blocks views and sightlines from Columbus and Fisherman’s Wharf, and is so large it extends 24 feet into Mason Street, overwhelming its surroundings with a look that is incompatible with the neighborhood.

Compare this to the sensitive and elegant restoration and expansion of the Marina library, another Appleton located in a playground. SFPL did the work for under $4 million (or $500 a square foot), which compares nicely with the refurbished clubhouse nearby, which came in at $600 per square foot. Significantly, SF Weekly dubbed the Marina library “the best ‘new’ branch in San Francisco.”

Meanwhile, the overall cost of SFPL’s branch renovation project has risen to $187 million (from the original $106), with no end in sight. Its new revenue bond authority gives the library open-ended ability to raise money for construction and retire the bonds with SFPL’s set-aside. Problem is that the set-aside is also intended to pay for more books and open hours. The more expensive branch construction becomes, the less money there will be for essential library services citywide.

Yet SFPL continues to proceed in a piecemeal fashion, with scant regard for the overall picture. Merced neighborhood leader Aaron Goodman joins the preservation community in charging that plans for North Beach, Ortega and Merced branches were made “without reference to the significance of Appleton & Wolfard’s body of work.”

At Ortega and Merced, for example, SFPL quietly obtained an exemption from environmental review of these historic Appletons and … er … neglected to notify the public in time for a challenge. Talk about engineering consent!

What’s more, the so-called Master Plan for North Beach Library and the adjacent playground has a foundation of quicksand. There is no money to renovate the playground and no likelihood of meaningful funding till well after 2013. The community deserves a legitimate Master Plan, based on real-world facts.

Perhaps the ultimate irony is that neither city librarian Luis Herrera nor his predecessor wanted a library on the Triangle. Wrong shape, tiny lot and even murmurs of bad feng shui. Susan Hildreth called a halt to Mason Street’s closure plans for that reason, while Herrera also favored another site. In fact, a Sunshine request revealed that he wrote colleagues that “a two-story library on the Triangle won’t work.”

Aside from the looming legal challenges, there is a moral reason for saving the North Beach Library. In 2003, the community defeated a plan for a four-story building on the Triangle. It was seized by eminent domain to be open space. Today, folks who fought to save the site for a park feel betrayed by SFPL’s plan to erect a 30-foot building there.