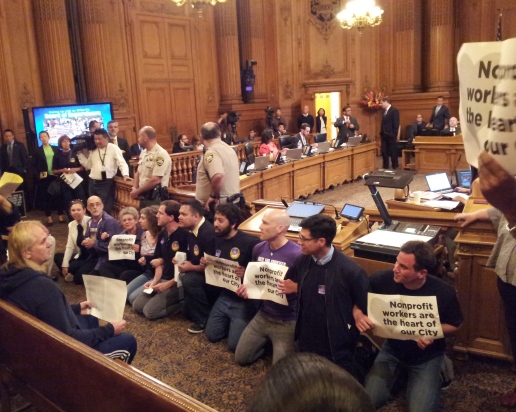 Nonprofit workers were disappointed to find out last week that the city had decided to give them only a 1.5% pay increase, far less than the real costs of running services in San Francisco. The city’s decision to stiff nonprofit workers came after Supervisors failed to increase the 1.5% outlined in the mayor’s budget despite their alleged support for nonprofits in the city.

Yesterday, however, nonprofit workers showed that they were not going to concede so easily.

11 people were detained in a spirited action inside City Hall, as dozens of nonprofit workers came to demonstrate their outrage, marching and chanting throughout the hallways. Workers with SEIU Local 1021, which also represent city workers, arrived in mass to demonstrate the mayor and Board of Supervisor’s decisions.

Nonprofit workers began crowding outside the Board of Supervisors Chamber shortly before it was set to begin and marched around the hallway to the Mayor’s office, where they delivered a large print out of a letter addressed to Mayor Ed Lee and signed by the workers in attendance.

“We demand nonprofit equality now and adequate funding for nonprofits. The Double Standard is unjust and unwise,” the letter said, addressing the fact that many for-profit corporations were given around 2-3% pay increases and have their pay automatically renewed annually.

In the city’s proposed budget, nonprofits will only get a 1.5% pay increase to accommodate the cost-of-doing-business increases. There are no guarantees for nonprofits to receive CODB increases, and they must ask the city every year for funding. 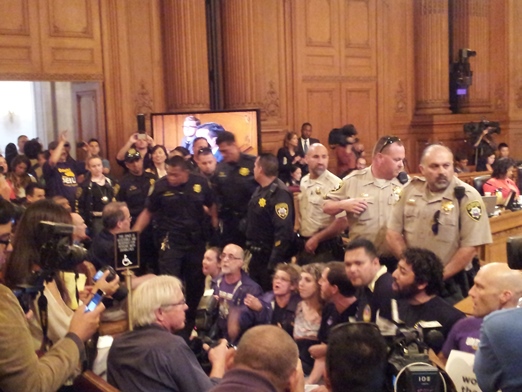 People then marched back around to the Chamber and stormed in, chanting along the way. Workers and supporters surrounded the perimeter while a small group went to the front and sat down, linking arms. Supervisors appeared to have been caught off guard by the action, with Board President David Chiu speaking through the microphone trying to get the rowdy crowd either to be quiet or leave.

“Why do we have to come year after year and beg for pennies?” questioned Alexander, as chanting continued for close to 15 minutes.

Not long after, sheriffs arrived with zip ties to detain the 11 people doing the sit-in. The 11 were lead outside the room but were quickly released after being written up.

The action was lively, but the intensity was felt in the anger and frustration of the workers who now must deal with less pay and more work because of the city turning its back on nonprofit workers.

“I’ve seen a lot of services get cut over the years. It’s very hard with the housing crisis,” Guinevere Newman an employee of Progress Foundation’s Clay Street treatment center said. Her nonprofit provides services for mentally ill and homeless patients.

“Programs like these are vital to the community, for fighting homelessness, poverty,” she continued. “We desperately need funding.”

Nonprofit workers were demanding a 3% raise, which is equal to what the city funded for for-profit workers. To include the additional 1.5% than what was allocated would have cost the city only $6.8 million, or 2.7% of the city’s current reserve of $250.7 million.

Additionally, the Board voted 9-2 to approve a mandate called Laura’s Law, which would enable judges to court-order mentally ill into outpatient programs. This means more clients will be sent to the same nonprofits that the city has decided to reduce funding for.

“This is a mandate that sends more work towards us mental health nonprofits,” Steayson Varghese, another nonprofit worker, said of the increased work but less pay that the city is burdening nonprofit providers. “Burn out is real.”

With cost of living in San Francisco increasing, nonprofit workers will have to work more and do increasingly difficult work too.

“People have the misconception that we’re asking for this money to get rich,” Jesse Hunter, a nonprofit worker with Baker Places, said. “It’s not raises. It’s the cost of living.”

While giving nonprofit workers only a 1.5 raise, the Supervisors will get a 2.6% raise in the budget.

We feel so passionately about the quality of our work we will never send any piece of work to you which doesn’t reach our high standards. If on a rare occasion we do this we will revise the work until you’re satisfied. These revisions are free of charge and are our way of apologising for you for not meeting your expectations the first time. We also offer a 100% money back guarantee. If you’re unsatisfied with our work you can request a full refund. We will credit it back to your account without any hassle. We’ve never had to do this, but our customers have peace of mind knowing this facility is there for them.