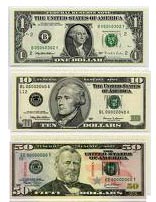 A federal judge ruled this week that America must join 180 other nations in producing paper currency that can be easily identified by blind and visually impaired people. The ruling in the suit brought by the American Council of the Blind and its members was hailed by disability rights activists, but was attacked by the National Federation of the Blind (NFB) as a “gimmick” that “could make things actually worse.” The NFB’s criticism of the suit led some media to claim that the community was split over the issue, and could lead the Treasury Department to appeal the ruling. But what media stories did not reveal was the NFB’s background, which includes its receiving a $1,000,000 donation from Diebold while promoting the company’s controversial electronic voting machines. The group also had a close relationship with Ohio Congressman turned convicted felon Bob Ney, who sponsored federal legislation this year creating a Braille coin—-whose sale proceeds go to the NFB.

Of the 180 nations that print paper currency, only the United States prints bills identical in size and shape in all their denominations. A Federal Court struck down this practice this week in a lawsuit brought by the American Council of the Blind (ACB).

While hailed by advocates including the American Foundation of the Blind (founded by Helen Keller), the ruling brought scorn from the rival National Federation of the Blind. James Gashel of the NFB told the Los Angeles Times “we believe in solving real problems of discrimination—not in doing gimmicks that look like they solve a problem and could make things actually worse. For a federal court to say that we are being discriminated against is simply wrong.”

The NFB website even describes the ruling simply requiring American currency to conform with that of the rest of the world as “dangerously misguided.” The NFB made the same argument in a press release it issued late yesterday attacking the groundbreaking court victory.

The NFB’s response led the Times and other media to conclude that the community was split on whether the U.S. should remain the only country in the world whose currency cannot be identified by the visually impaired. The Treasury Department could well use the NFB’s opposition to justify its seeking an appeal of the court’s ruling.

So who exactly is the National Federation of the Blind?

This is a group that claims to advocate for the blind, yet it opposed detectable warnings on transit platforms and regulations requiring that television shows have audio descriptions.

What these reforms have in common with the currency lawsuit is that the NFB’s rival, the ACB, initiated them.

In other words, it seems the NFB would rather have no improvement for the visually impaired than have such progress brought about by a rival group.

It would be akin to the Congress for Racial Equality in the 1960’s opposing civil rights laws initiated by Dr. Martin Luther King’s Southern Christian Leadership Conference. The rivalry among civil rights groups was often intense, but I do not recall any of the leading groups actually criticizing measures that combated discrimination.

The NFB gets little scrutiny outside the disability rights community, which may explain why the media quoted its representatives without disclosing anything about the group’s history.

Remember the controversy about voting irregularities in Ohio regarding Diebold voting machines? Irregularies that some believe wrongly handed the state—and the presidency— to George W. Bush?

Well, the NFB was among the key groups pressuring Ohio to use Diebold’s machines. And why did the NFB take such a stance?

“…What’s even more troubling is that the group [National Federation for the Blind] has accepted a $1 million gift for a new training institute from Diebold, the machines’ manufacturer, which put the testimonial on its Web site. The federation stands by its “complete confidence” in Diebold even though several recent studies have raised serious doubts about the company, and California has banned more than 14,000 Diebold machines from being used this November because of doubts about their reliability.”

You can read the whole tawdry history of the Diebold-NFB relationship at http://www.bbvforums.org/forums/messages/73/36492.html?1157741859

The NFB’s relationship with now disgraced ex-Congressman Bob Ney also proved profitable. Ney was the driving force behind HR 2872, legislation enacted earlier this year to mint a commemorative coin that will honor Louis Braille and the code of raised dots that bears his name.

Now there’s certainly nothing suspicious about producing such a coin, and many Democrats including incoming Maryland Senator Benjamin Cardin co-sponsored Ney’s legislation. But the interesting fact about the coin sales is that proceeds will go to the NFB.

That’s right. The NFB was not about to share this revenue with the AFB or other advocacy groups.

The more one learns about the NFB, the more one understands its opposition to the ACB’s winning a landmark court victory. For the NFB, it’s about currying favor with the powerful and building one’s financial empire, and this also means demeaning and criticizing the achievements of rival groups.

Let’s hope the Treasury Department ignores the NFB and implements, rather than appeals, the federal court’s order.