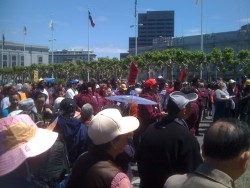 On June 1st, Mayor Gavin Newsom will propose a budget for next year – and like he does every year, health and human services will get cut badly. While the state makes budget cuts to the poor, non-profits who get a few hundred thousand dollars in City contracts to provide front-line services will get axed from a $6.6 billion budget. Rather than react to the cuts next week and ask the Board of Supervisors to restore funding, 170 clients and their service providers rallied in front of City Hall yesterday for “Project Budget (Re)-Connect.” The crowd called for revenue measures that would help blunt the City’s $483 million deficit. They’re not wasting any time. On June 1st after the Mayor submits a budget, activists will gather at SEIU Local 1021 to start collecting signatures for a hotel tax measure. But for now, expect Newsom to propose a “cuts-only” budget.

It’s not even a question of speculating that the Mayor will propose budget cuts for poor people. His Commissioners for various City Departments have already recommended cuts – which include $137 million to the Health Department, a 40% cut to the Human Services Agency and $18 million out of the Department of Children, Youth & Families.

What would that mean? $12.5 million in cuts community behavioral health, $1 million to Trauma Recovery Centers, cutting the SRO Collaboratives by $736,000, $25 million in homeless services that include supportive housing, shelter beds and Ellis Act eviction defense. Other cuts include $19 million to family services (including youth programs), and $2 million in services to seniors and the disabled. Mayor Newsom proposes these cuts almost every year, and then the Board of Supervisors scramble to replace them.

“Politicians love to talk about how bad our deficit is,” said Supervisor Chris Daly at the rally. “But while it’s bad, remember there are $6.6 billion being appropriated in this building,” as he pointed towards City Hall. “It is really more a question of priorities.”

Newsom announced this week that he has brokered a tentative deal with the Police and Firefighters Union, where they agreed not to take a raise this year. But their members have not yet voted to amend their union contract.

And while this could save $18.5 million for the Fire Department and $15 million for cops in this year’s budget, we are in this mess because Newsom foolishly cut them generous deals in 2007. The Police even brag that the contract made San Francisco cops among the best paid in the nation. If you have time, check out the Chronicle’s nifty tool that shows which City employees made over $100,000 last year. Eight of the Top 10 were firefighters or cops.

Back at the rally, speaker after speaker said we should “tax the rich!” to help balance the budget. And if our tax structure was even remotely fair, we would not have to make cuts.

But I doubt many folks at the rally understood how difficult it is legally – not to mention politically – to raise any local revenue. Prop 13 makes it criminally impossible to make Downtown pay its fair share, and every single tax increase must be passed by the voters.

On Tuesday, after the Mayor presents his budget proposal, activists will meet at 5:30 pm at SEIU Local 1021 (350 Rhode Island Avenue, entrance on Kansas Street) to kick off a November campaign to raise the hotel tax and fix an existing loophole. The measure is well crafted to be both fair and politically viable, but it will require a serious grassroots effort to pass.

Revenue measures don’t have a good track record of passing, even in liberal San Francisco. To win, activists will have to be just as passionate about raising the hotel tax (if not moreso) than they are now about stopping budget cuts.

Supervisor John Avalos mentioned at the rally that, despite being Chair of the Board’s Budget Committee, Mayor Newsom’s Office has not been forthcoming with him about details. “But I presume that it will be another cuts-only budget,” he said.

Newsom proposed a “cuts-only” budget last year with an eye on his statewide ambitions, but now the realities in Sacramento have changed. Even the State Senate Democrats want to raise taxes – having proposed a $5 billion revenue package to offset Arnold’s cut proposals. If Newsom doesn’t support something similar for the City, he’ll be out of step with statewide politics.

But Avalos said Newsom is likely to propose one “revenue-raising” idea – a measure to fast-track condo conversions, which real estate speculators who have profited on evicting tenants would love. With the budget deficit, expect the Mayor to threaten this as a solution.

Thankfully, Avalos vowed at the rally that such a proposal would be “dead on arrival” at the Board of Supervisors.