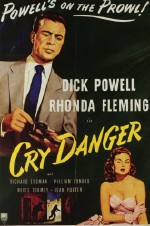 The Noir City Festival returns to the Castro Theatre – sometimes referred to as the Film Temple. This is the world’s most popular noir films series as it continues to bring you hot talking babes and men on the run with smart-ass mouths. And the best place to enjoy these Black and White Gems is to see it in a glorious movie palace like the Castro.

They now have a completely refreshed and restored print of the really badass fun “Cry Danger” that stars Dick Powell and Rhonda Fleming. Here’s the story: Ex Con (Powell) seeks the real culprit in the crime he was framed for, in a night world of deceptive dames and double crosses. Sounds like City Hall, doesn’t it?

Here’s an interesting tidbit: In an interview with Tom Weaver, Jean Porter said that the film was “directed by Dick Powell, and he wasn’t given director credit. Dick gave Robert Parrish the director’s credit – but Dirk did the directing.”

Here is a quote from this tough talking movie: Rocky Mulloy says: “say, you’ve got all my dough. How about some cab fare?” – “What you gonna pay me back with, some more of that hot money?”

Good dialog and a really intriguing fast moving story, make this one of the better film noirs of its day. And it will be great to see this restored print. If you like sarcasm for breakfast, then you’re gonna love this.

The Festival runs for ten days. Jan. 22-31, 2010. Anita Monga, the festival programmer came up with this year’s festival name. “Lust and Larceny.” Monga says: “Our goal is not only to save films, but to maintain, for as long as we can, the communal experience of ‘going to the movies’ – as it was when these films were first screened.”

And of course none of this would take place without Eddie Muller, the ‘Czar of Noir’. Muller tells us about a great deal. “What’s unique about Noir City is its commitment to one admission price for a double bill. We believe we’re the best entertainment deal in town, especially during hard economic times – in addition to being the only film festival that is such a grassroots fashion used ticket sales to fund film preservation.”

As the festival goes on – Buzzin will be giving some more highlights. Beyond Chron will keep you up to date on this fascinating look back at History making films.

How does she look so young? — You may ask yourself, as Florence Henderson glides up on the stage in a snazzy, but not overdone outfit. In Henderson’s show there is substance and not a lot of empty glitter.

Here are some of the lyrics that are in the first song that she sings. It kids around with getting older.

I have been lifted,
Lipo – ed and molded
She’s shiny –
I’ll bet she’s been dipped in Wesson Oil!

(This special material that Henderson sings makes reference to the commercials that she has done in the past. One was Wesson Oil, and the other famous one was Polident Denture Cleaner.)

Henderson tells us that her teeth are not Dentures. One guy asked her – “are they real?” – “I patted my chest thinking that what was he was referring to.” He said: “No, not there – your Teeth” Henderson has many stories to tell in this absolutely riveting performance. The audience, including myself was in stitches. It’s not many times that at a Cabaret show, you see an audience that jumps up and gives a standing ovation. And this happened not once, but three times.

There is a really hilarious bit that she does in the show that involves passing the hat. The old hat has something to do with her Dad – but what she does with it in the audience gives you a chance to rub elbows with the star. You get one on one entertainment. Henderson has boundless energy that made the whole evening a magical, visual evening.

It’s surprising what people throw into the hat. “One guy gave me fifty cents” – She said. That was I – I don’t carry a lot of money around and that was all I had. And then looking through the hat she said – “one lady gave me a packet of Equal.” And that was only the beginning of the fun filled evening.

She jokes about the Viagra Commercials. “It tells you on the label that if you get an erection that lasts for more than 4-hours is dangerous. It takes you longer than that to get to the emergency room” – she says. And continues with this: “Would you stop by my house first?” Then Henderson sings a song from a Jewish Musical “Wish You Were Here”.

She gives us lots of great tidbits in-between the great Broadway music from shows that she has been in. There was Oklahoma, the first Revival of “South Pacific” at Lincoln Center. Then she sang with the band and chorus sing “I’m In Love with A Wonderful Guy!” from South Pacific. Wonderful! Her voice is still strong. She’s more than a musical star – she’s a comic and a great storyteller. I loved this one: Since she was so wonderful in the Touring ‘Oklahoma’ they asked her to audition for the movie version. “I didn’t get it” – she sighed. It went to that “Bitch” Shirley Jones. Of course, I kid. Shirley and I are great friends.”

The audience gets into the act too. Amazingly they knew all the words of “The Brady Bunch Song”. Here is what she says about some of the Celebs that she has worked with: “Paul Linde – Funniest Person I’ve ever known. He could just point at something and make me laugh. Gene Hackman tried out for a part on the Brady Bunch, but didn’t get it. David Merrick was kind of grumpy. Phyllis Diller said to me one day. “If you ever know someone who needs a Heart Transplant – go see Merrick, his has never been used!” She ended with this wonderful song – “My Heart Stood Still” – Here are a few lyrics:

And you know what? My Heart stood still. This was one of the most satisfying entertainments that I’ve seen in some time. It’s Laugh-out-loud-funny, poignant and incredibly entertaining!