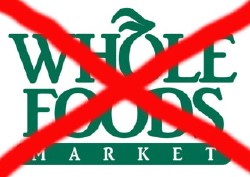 The designer tofu has hit the fan! All over the internet, angry Whole Foods shoppers are threatening to buy their wheat grass and organic salad somewhere else. The call for a boycott of the successful health food chain, which is listed among the Fortune 500, comes in the aftermath of an anti-Obama healthcare reform op ed in the Wall Street Journal by Whole Foods co-founder and CEO John Mackey.

In the article, which ran last week, Mackey argued for reform in healthcare, but not single payer, which he described as “a massive new health-care entitlement that will create hundreds of billions of dollars of new unfunded deficits and move us much closer to a government takeover of our health-care system.”

According to Mackey, there is no intrinsic right to healthcare in America or anywhere else: “just like food and shelter it is best provided through voluntary and mutually beneficial market exchanges,” he wrote.

As for the health food guru’s solution for those uninsured Americans who go sick because they can’t afford care, it’s simple (at least for him): “Make it easy for individuals to make a voluntary, tax-deductible donation to help the millions of people who have no insurance and aren’t covered by Medicare, Medicaid or the State Children’s Health Insurance Program.”

Shoppers were quick to disagree. “While Mackey is worried about health care and stimulus spending, he doesn’t seem too worried about expensive wars and tax breaks for the wealthy and big business such as his own that contribute to the deficit,” shopper Michael Lent told ABCNews in Long Beach, California. Lent said he won’t be going to Whole Foods anymore.

I’ve never been a fan of Whole Foods. I became vegan 30 years ago when the only choice was to shop at co-ops, where pasta, grains and beans were cheap in bulk and a gallon of apple juice could be had for under $2.

When I moved to San Francisco, Rainbow Grocery, our local worker-owner co-op, quickly became my favorite place to shop. Whole Foods always seemed too yuppie and chic. I never trusted the politics of the place.

Now I know why.

Mackey’s op ed is pure fiction. Capitalism does not provide food, shelter and a living wage to the poor and working-class in this country. More people are hungry, homeless and working in jobs that don’t pay enough to make ends meet than ever before (except maybe during the Great Depression).

To expect that voluntary tax-exempt contributions to a fund for the 40 million or so who are without healthcare will solve the problem is beyond stupid. It is an insult to those who go without necessary medical help every day.

Single payer is the only solution to our broken healthcare system.

Mackey may not believe it, but I do: Healthcare is a basic human right.

Tommi Avicolli Mecca is co-editor of Avanti Popolo: Italians Sailing Beyond Columbus, and editor of Smash the Church, Smash the State: The Early Years of Gay Liberation, which has just been nominated for an American Library Association award. His website: www.avicollimecca.com