No Unions Behind The Kitchen Door? 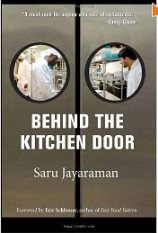 As Fast Food Nation author Eric Schlosser says in his introduction, ROC “doesn’t just represent workers. It seeks to empower them, gain them respect, and give them a voice at work.”

Jayaraman is a Yale-educated lawyer who directs the Food Labor Research Center at the University of California, Berkeley. She got her start, with much help from UNITE-HERE Local 100, after the 9/11 attacks destroyed Windows on the World, a swank restaurant that sat atop one of the Trade Center towers. Seventy-three workers died and 250 lost their jobs. Windows workers became the nucleus of the original ROC, which provided support services for families of the deceased.

Fekkak Mamdouh, a Moroccan immigrant and former headwaiter at Windows, became a co-founder of the organization. Jayaraman and Mamdouh launched a successful campaign for re-employment of displaced workers when the owner of Windows tried to open a new restaurant elsewhere in Manhattan but initially refused to hire former union members.

In Behind The Kitchen Door, Jayaraman describes ROC’s organizing model, which emphasizes rank-and-file leadership development and collective action of the sort much needed in more unions. Unlike union dues payers, however, almost none of ROC’s claimed “10,000 members” actually help finance their own organization, leaving it almost entirely dependent on private philanthropies. ROC now operates in twenty states, with a $4 million annual budget raised primarily from 16 foundations including Ford and Rockefeller. (For a detailed, if distinctly unfriendly account of ROC’s prodigious funding-raising, see The Emerging Role of Workers Centers in Union Organizing, a report written for the U.S. Chamber of Commerce by management consultant Jarol B. Mannheim and posted at: http://www.workforcefreedom.com/sites/default/files/WFI_ManheimStudy%2011-21-2013.pdf)

Jayaraman’s book contains inspiring profiles of ROC activists, many of them immigrants, who have battled race and sex discrimination, sexual harassment, unsafe or unhealthy conditions. ROC campaigns combine carrots with sticks. Restaurants targeted because of their unfair labor practices face creative picketing, bad publicity, community pressure, and legal complaints. The author reports that, in nearly a dozen campaigns “against exploitation in high-profile restaurants,” ROC has won back “more than $6 million in stolen tips and wages” and “fought to change policies that have an impact on restaurant workers, such as increasing the federal-tipped minimum wage from $2.13 an hour.”

When image-conscious celebrity chefs (like Mario Batali) or other wealthy owners see the light, ROC stands ready to help them become “responsible employers.” Its “partners” are invited to join ROC’s Restaurant Industry Roundtable, a place where they can “learn best practices from one another and generally work together to promote the ‘high road’ to profitability in the industry.” In addition to being a savvy industry watch-dog and whistle-blower, ROC has also opened worker-owned restaurants, called COLORS, in New York City and Detroit to provide job training for its supporters and employment in model eateries.

Behind The Kitchen Door demonstrates, above all, how ROC has creatively linked workplace issues to the concerns of those who want their restaurant fare to be “organic, locally grown, slow, cage free, and grass-fed.” Jayaraman provides a checklist of things that ethical eaters can do to help restaurant workers win better wages and working conditions.

She proposes that consumers with a social conscience lobby for paid sick days, support minimum wage increases for tipped workers, use the ROC National Diners’ Guide to avoid restaurants that cheat or otherwise mistreat their employees, and “support workers all along the food chain” so that labor standards can also be raised for “farmworkers, meat-and poultry processing workers, food retail and distribution workers, and supermarket workers.” (For ROC’s latest approved restaurant list, see: http://rocunited.org/dinersguide/)

Unfortunately, formal collective bargaining is not one of the author’s recommended “recipes for change” in the restaurant industry. This is a strange omission because, despite all its flaws, unionization is a far more effective mechanism for taming management misbehavior, on a day-to-day basis, than any hard-to-enforce restaurateur pledge to engage in “sustainable business practices.”

In the workers’ center demonology of the Chamber and Congressional Republicans, organizations like ROC have been depicted recently as a sneaky “back-door approach” to unionization. Yet, in her book, Jayaraman never mentions that hundreds of thousands of “food chain” workers have far greater legal protection and workplace representation than any workers’ center, including her own, can provide. These workers cook and prepare food in unionized stadium concession stands, campus, corporate and government cafeterias, hotel dining rooms, and restaurants located in major airports and casinos. They belong to UNITE-HERE and other AFL-CIO or Change To Win unions.

In Beyond The Kitchen Door, the author never even mentions UNITE HERE by name, even though it’s the main food service workers union and helped her start ROC in New York. She notes that, “in January, 2008, ROC helped launch the Food Chain Workers Alliance,” without acknowledging that other “worker-run organizations” affiliated with the same coalition include the United Food and Commercial Workers, as well as UNITE HERE. Nor does her book report on the activities of “alt labor” groups, like Young Workers United in San Francisco, which challenged the Cheesecake Factory around ROC-type issues and won a string of local victories. (YWU has long been housed in or near the offices of Hotel Employees and Restaurant Employees Local 2.)

Jayaramen’s organizational self-centeredness and limited reform agenda are major shortcomings of her otherwise smartly packaged volume. Potential non-labor allies, in the sustainable food movement, need to know not just about the great work of ROC. They also need to be educated about the value of workers gaining a union contract, rather than just relying on wage-and-hour law enforcement, new protective legislation, or lawsuits leading to agreements covering a few thousand workers at restaurants that remain non-union.

The national AFL-CIO has finally—and officially– become more welcoming of workers centers. So, in return, it might behoove the talented architect of ROC to describe more accurately a broader industry context in which organized labor and her own labor advocacy group play different but complementary roles in “lifting industry standards.”

A different version of this review appeared in Labor Studies Journal, Fall 2013

(Steve Early was a longtime union organizer for the Communications Workers of America and is currently a member of TNG/CWA Local 39521 in San Francisco. His most recent book is Save Our Unions: Dispatches From a Movement in Distress, Monthly Review Press, 2013. He can be reached at http://steveearly.org or Lsupport@aol.com)