No There There by Chris Rhomberg 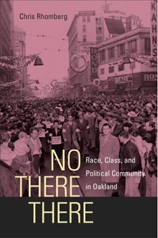 Chris Rhomberg’s No There There begins with an astonishing scene from local history: two thousand hooded Ku Klux Klan members marching through the Oakland hills, under a burning cross. Rhomberg goes on to describe two equally dramatic Oakland uprisings. In 1946, a general strike shut down the city for two and a half days, as interracial crowds flooded downtown in a celebration of working-class identity and defiance. And in the late 1960s, a broad-based and militant black power movement, led in part by the Black Panther Party, rose up in the West Oakland ghetto.
No There There is a fascinating – though sometimes overly academic – look at some intriguing questions arising from this history. How could three such striking revolts – drawing participants from different communities, and challenging different power structures – occur in one small city in a period of fifty years? How do Oakland political leaders normally maintain social stability? Why does that stability sometimes break down? And why is the city’s turbulent history largely invisible to locals?
To answer these questions, Rhomberg incorporates three forms of history. First, he looks at broad economic and social changes and how these altered the city’s character and power relations. Second, he details the dynamics of institutional politics – how political leaders create stable regimes that serve the interests of some social groups and exclude others from the political community. Finally, Rhomberg looks at the history of social movements. He traces how excluded groups form collective identities and organize challenges to established leaders. In order to head off large-scale revolt, Rhomberg argues, political elites reorganize their regimes to incorporate some of the rebellious groups’ leaders and interests.
Rhomberg’s first case study is the growth of Oakland’s Ku Klux Klan in the 1920s, which he explains as the revolt of a growing white Protestant middle class against profiteering public-service corporations and their allies in the Republican party machine. These residents were irate at the inferior services provided by the corporations, the corruption of the Catholic machine politicians, and the “moral decline” of the working class (symbolized by white immigrant saloons and Chinese-run brothels and gambling houses). The Klan gave voice to this anger, advocating for clean government, temperance, and native-born white supremacy. In the mid-1920s, it attracted thousands of members and held several mass gatherings. The Klan soon turned to electoral politics, and got a few members elected to city office, but these officials soon became as corrupt as their predecessors. Middle-class voters eventually backed the leadership of downtown retail business elites, who sponsored city government reforms that deposed the machine politicians and created an insulated pro-business regime.
The book’s second section looks at the post-war General Strike. During World War II, migration and legal changes gave unions a broader and more diverse membership; after the war, employers went on the offensive to reverse workers’ gains. In 1946, police helped downtown department stores break a strike by the largely female retail clerks’ union. Fearing a trend of union-busting, the normally conservative Central Labor Council called for a general strike. The city was shut down for days as lively crowds of up to 20,000 gathered downtown, transforming the protest into a celebration of identity and a reclamation of public space. Though observers reported that strikers were ready to dismantle City Hall, cautious union leaders called off the strike after two days with few concrete victories. Frustrated by the pro-business regime’s opposition to social change, labor leaders turned to electoral politics. In 1947, they helped organize a moderate social-democratic slate of candidates for City Council. Though four of the candidates were elected, the coalition never secured a majority or effected meaningful reforms. With the momentum of the strike forgotten, the liberal officials eventually faced a recall campaign by business leaders.
Finally, Rhomberg examines the conflict between city leaders and African Americans. In the early 1960s, the city government created social-service bureaucracies to manage the growing and impoverished black community. These programs, intended to preserve social order, soon became a site of conflict and mobilization. Black professionals gained control of federal anti-poverty funding and used this leverage to affect city social policy. Meanwhile, poor blacks mobilized to demand neighborhood control over social programs, and federally funded service centers became hubs for organizing. But city government and business leaders still refused to seriously address unemployment, housing discrimination, and police brutality. Some black professionals broke off ties with the city, while young, poor and criminalized blacks staged armed street protests through the Black Panther Party. In the early 1970s, black activists tried to address the city’s intransigence by running Panther leader Bobby Seale for mayor. Seale’s campaign energized the community and brought out record numbers of voters, but could not win a majority against the intense opposition of whites. In the following years, blacks were incorporated into the city government. But they tended to be middle-class, politically moderate, and dependent on the cooperation of business. Most of the ghetto residents’ demands for social justice were never met.

In No There There, Rhomberg digs up a wealth of genuinely fascinating local history. All three of his case studies are eye-opening, thought-provoking and well documented. They provide an illuminating perspective on contemporary Bay Area politics, and should hold inspiration and lessons for local activists. Rhomberg’s attention to political theory helps him find patterns and broad implications in the tangle of daily conflicts, so the book never lapses into picturesque local history or cheerleading for defunct movements.
At the same time, Rhomberg’s theoretical emphasis and academic language make some parts of his book difficult to wade through: “The researcher hypothesizes that some of these attributes affect other attributes, and the hypothesized causal factors act largely independently from one another.” It’s certainly worth decoding (or just skipping) these passages, but the jargon is likely to scare off many of the local readers who could benefit most from Rhomberg’s insights. The book could also be more useful to Bay Area activists if Rhomberg spent more time on the relationship between Oakland’s history and its current conflicts. The final chapter does include some description of the city under Jerry Brown, but it lacks the depth and critical perspective of the earlier sections.
Also, Rhomberg at times seems oddly optimistic about social movements’ ability to reshape institutional politics. He credits post-war workers and 1960s black activists with forcing city leaders to incorporate them into new urban regimes. But it’s not clear that either group ever really gained power within the local political system. Insurgent campaigns like Bobby Seale’s scored symbolic victories, but they were never able to use the city government to win concrete gains for their communities. In fact, the incorporation of individual black leaders or liberal whites into the city government may have reduced the power of working-class communities – by diffusing movements’ energy and channeling them away from the street protests that truly threatened city leaders. (This point has interesting implications for San Francisco politics. Like Seale in the 1970s, Matt Gonzalez mounted a striking challenge to an entrenched power structure. But now that the mayor’s race is over, his candidacy does not seem to have inspired much new organizing among his constituents. Without ongoing mobilization, Gonzalez’s campaign – like Seale’s – may remain a symbolic victory with few tangible results.)
In any case, Rhomberg’s insight and thorough research will make the book satisfying even to readers who disagree with some of his conclusions. And his ideas could help stimulate vital strategic debates among Bay Area progressives. Hopefully, the book will move beyond its academic audience to help local residents and activists reclaim and learn from Oakland’s amazing history of popular rebellion.

Sarah Norr is an organizer with the Central City SRO Collaborative