“No on 8” – When Reactive Politics Become Losing Politics 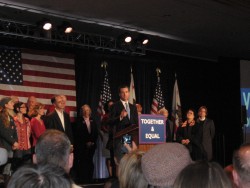 It pains me to describe it this way, but “No on 8” – like Michael Dukakis – blew a seventeen-point lead. Progressives were lulled into complacency by early poll numbers, and distracted by the Barack Obama campaign – even after it became apparent he would win.

But “No on 8” was also a reactive campaign that did not anticipate the opposition’s arguments to sway swing voters. Bloggers were effective at pushing memes to define the opposition, but it failed to define much of the race. And “No on 8” did not push a simple and compelling message – “Obama Opposes Prop 8” – to the African-American community until the other side beat them to it, forcing them to play catch-up. This is no time for making excuses, or inspiring words that we’re part of a greater struggle. Our right to marry just got taken away from us, and we’ve got to be smart if we’re going to get it back.

I’ll freely admit I was one of many progressives distracted by the presidential race and lulled into a false sense of security about Prop 8. But in early October, after returning from a week in Wisconsin to help Obama, it became apparent that Barack was going to win by a landslide—and that Bay Area activists were wasting their time driving to Reno while there was important work to be done at home. New poll numbers on Prop 8 jolted me out of complacency (one could say I “reacted” to bad news), but my pleas about the presidential race fell on deaf ears. Somehow, progressives still shell-shocked from 2004 were afraid that simply believing Obama was going to win would “jinx” the outcome.

I heard a lot from marriage equality activists last night about “how far” we have come since the days of the Knight Initiative—Proposition 22, where 61% of California voters in March 2000 voted to add discrimination in the marriage code. But we forget how incredibly conservative that particular election’s turnout was—and we simply don’t have the same excuse for Prop 8’s recent fate. California voters who narrowly supported Prop 8 also rejected the anti-choice Proposition 4 (despite it also being neck-and-neck in the polls), approved a bond for high-speed rail (Proposition 1A), and crushed Proposition 6 (the Runner Initiative) despite the state’s general “law and order” reputation.

We need to face the fact that Prop 8 passed because a lot of liberal people voted for it—swing voters who should have known better, if only they had the right message.

These swing voters like to think of themselves as “tolerant.” They believe they support gay rights, but are not always comfortable thinking much about the issue. They have a “live-and-let-live” approach, and don’t appreciate any group of people indoctrinating their worldview on the rest of society. For a while, the “No on 8” message worked well with this crowd: it is morally wrong to have religious extremists impose their definition of marriage on the rest of society, singling out groups of people who don’t apply and depriving them of a basic right. Telling them the Mormons were funneling $20 million into the Prop 8 campaign was an especially effective message for this group.

The problem happened when the Prop 8 campaign—through blatant lies and deceit—changed the subject into gays and lesbians imposing their agenda on our elementary school children. Suddenly, the people who were “indoctrinating” people who have a “live and let live” attitude was the homosexual agenda. It became apparent to me a few weeks ago when I was phone-banking for “No on 8.” I spoke to a black woman in San Francisco’s Western Addition who was dead-set against gay marriage now that she had been scared into believing we were imposing our lifestyle on her. And when people are afraid, it’s hard to make them listen to facts—especially if they don’t know you.

One of the basic lessons in activism is to not react to a problem when it comes up, but to be pro-active and frame the agenda. It’s not like right-wing extremists haven’t used the “gay marriage will be taught in our schools” line before, and the campaign should have been ready to anticipate such attacks. As far back as 1998, the first ballot proposition to ban marriage equality in Hawaii had a TV spot with a small child reading a book about two fathers—and he then gets confused. The message back then for swing voters was the same message California swing voters got now—“will my kids have to learn about it?”

Another basic rule is to anticipate what strategies the opposition will come up with to lure voters, and to preempt them with your own overtures. Gay marriage supporters were not happy that Barack Obama said he believes marriage is “between a man and a woman,” but he rarely got credit for going further than any presidential candidate had gone before. He supports fully repealing the Defense of Marriage Act, and – more importantly – he came out against California’s Proposition 8. Knowing that Obama was going to win the state comfortably, “No on 8” should have stressed Obama’s opposition from Day One.

They did not, and it allowed the Prop 8 campaign to get African-American voters on their side by leading them to believe that Obama supports Prop 8. As I’ve written before, the black vote was critical in this race. Polls showing Prop 8 either ahead or behind hinged almost completely on whether African-Americans strongly supported it—or barely supported it. Aggressive overtures needed to be made to that community, and there was no better messenger in this election for this group of voters than Barack Obama.

Instead, “No on 8” waited until the other side made their own hit piece that implied an Obama endorsement of Prop 8. By then, we were being reactive.

Finally, I did go to the “No on 8” campaign office in the Castro as often as I could—but quickly became frustrated at what they were asking volunteers to do. I was happy talking on the phone with swing voters—which was useful and effective—but they seemed more interested in having us do visibility in San Francisco, going to strongly liberal (even gay) parts of town to make sure our base knew they had to vote “no.” Rather than preaching to the choir, we were told this was useful because much of our base was confused—that some supporters think they’re supposed to vote “yes” on Prop 8 to affirm gay marriage.

I don’t doubt there were a few cases of gay people in San Francisco who were confused, and accidentally voted for Prop 8. But this appeared excessively anecdotal and reactive, when I was far more interested in being pro-active and effective in getting work done. Ironically, it turns out that a percentage of our opposition was equally confused—if not more so, which made the issue a wash. When I dropped “No on 8” literature in East Oakland, I ran into an African-American woman—who said she would vote “no” on Prop 8 because she “really didn’t want” gay marriage being taught in public schools.

It is now 4:22 a.m. on Wednesday morning, and Prop 8 is still up 52-48 with 90% of precincts reporting. Now that discrimination has been enshrined in our Constitution, it will require another vote of the people to have it repealed. I don’t doubt that with the state getting younger, future efforts at marriage equality will be successful. But I can’t help believing we have seriously blown an opportunity in this election to give the right wing a stunning defeat—one that would forever leave them on the ash heap of history.

We need to start now to organize … and this time, let’s do it right.