No on 8 Campaign Office Opens in the Castro 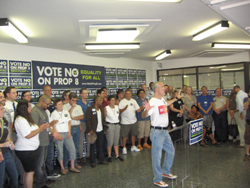 Under very short notice, over 100 activists came out on Saturday morning in the sweltering heat to celebrate the opening of a “No on 8” campaign headquarters in San Francisco. Activists have already been working for months to build up a grassroots operation to defeat the anti-gay constitutional amendment, but now they will have a spacious centrally-located office to organize. San Francisco Mayor Gavin Newsom, Assemblyman Mark Leno, Supervisor Tom Ammiano and Oakland Mayor Ron Dellums worked up the crowd with reminders of this historic struggle–and how a defeat by the radical right would be a huge setback for the LGBT community. Phonebankers, precinct walkers and other volunteers are needed between now and November 4th to defeat this initiative. To get involved, come by the office at 2278 Market Street, 2nd Floor (between Noe & Sanchez.)