No More Excuses: School Lunches Can Be Healthy! 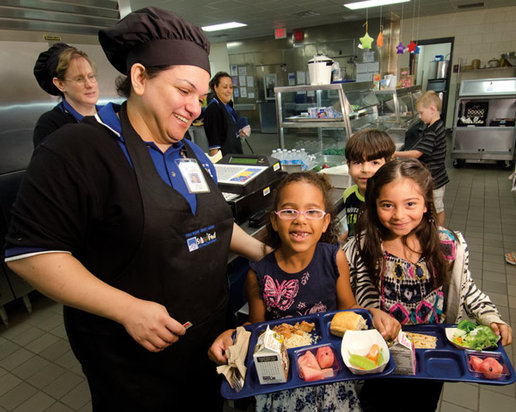 Over the last several days, a colleague and I have documented some of the silliest excuses used by the School Nutrition Association (SNA) to turn back new healthy school lunch rules. But we’ve saved the best most cynical excuse for last.

Excuse #5: Some schools are struggling to implement the new requirements

According to the USDA’s state-by-state assessment of 19,721 school food authorities, the vast majority reported successful compliance with the new nutrition requirements. Seventeen states reported 100 percent compliance, including some that are, shall we say, not known for healthy eating (we’re looking at you, North Carolina). And the remaining struggling schools are mostly concentrated in just a few states and territories. (For example, apparently only one of Guam’s three school food authorities reported full implementation, for a 33 percent compliance rate.)

So SNA’s “some” amounts to just five percent of the nation’s schools. And most people would see this as a victory, but not SNA. As reported by Politico, the organization’s spokesperson testified at a recent hearing and said of the 95 percent compliance finding:

Wait, what? I’ve been out of school a long time, but unless things have changed more than I realized, 95 percent is still a solid “A.” So I’d say a 95 percent compliance rate is more than material. It’s indisputable evidence of success.

Not that it isn’t important to help that last struggling five percent of schools. But the USDA is bending over backward to do just that. And instead of accepting that help and lobbying for more if it’s needed, SNA keeps acting like the Little Engine That Couldn’t. They’re telling Congress—and anyone else who will listen—that healthy lunch rules have to go.

One year ago, the USA Today reported on SNA’s increasing lobbying expenditures, which had doubled from the first quarter of 2014 to the second quarter. A quick review of SNA’s most recent lobbying reports on the House of Representatives lobbying disclosure website this week reveals that the trend continued into the fall of 2014, with SNA ramping up its lobby expenditures again by 75 percent.

All that so that five percent of schools don’t have to do the work that the other 95 percent have done successfully.

But the excuses may be wearing thin…

As the National Journal reported earlier this week from SNA’s annual national conference:

“Educational sessions…and a walk around the trade-show floor raise questions about whether changing the regulations is a priority for school food-service directors. The legislative-policy session was lightly attended, while sessions on how to manage employees and how to convince children to eat healthier foods were filled.”

This is good news, and suggests that SNA’s leaders (and its corporate sponsors) aren’t getting much traction with its membership.

And in an email sent to UCS and other organizations yesterday, USDA Deputy Under Secretary for Food and Nutrition Consumer Services Katie Wilson detailed her agency’s outreach to SNA members in Salt Lake City this week:

“Numerous USDA staff across multiple programs and initiatives attended the conference. We hosted over a dozen sessions on topics such as implementing the Community Eligibility Provision, successful strategies for reducing food waste, and creative ways to season food with less sodium. We also set-up several booths on “USDA Lane” to talk to attendees one-on-one and connect them with a variety of resources including informational hand-outs, student workbooks, cookbooks, and online tools. Throughout the conference, we were able to provide examples of ideas and best practices from the more than 95% of school meal programs currently meeting the updated nutrition standards to encourage and inspire attendees.”

So despite all of SNA’s excuses, it appears that the persistent efforts of school foodservice professionals and the USDA are working.

In creative school districts across the country, intrepid lunch ladies (and gentlemen) are proving every day how flimsy the excuses really are. They’re doing away with processed junk food and still balancing the books. They’re getting kids to eat whole grain grits and biscuits, salads and tofu, and locally grown butternut squash. They’re experimenting with less salt but more flavor. They’re proving that school lunches can be healthy and delicious, and setting America’s children on a path to better health and greater productivity throughout their lives.

Let’s hear it for the lunch ladies! (And gentlemen.)

And now, having taken aim at the leaders of SNA over the last week on this blog, I want to say a word to their allies in Congress. One of them, Rep. Glenn Grothman (R-WI), reportedly said at recent hearing:

“To force [schools] to serve food that hungry kids throw out maybe tops the list of things the federal government shouldn’t be doing.”

But he couldn’t be more wrong.

Congressman, here’s what tops the list of things the federal government shouldn’t be doing: Spending the taxpayers’ money on junk food that makes children sick.

So don’t do that.

This piece first appeared on the Union of Concerned Scientists Blog.

Read the rest of this series:

About the author: Karen Perry Stillerman is an analyst and advocate for transforming the U.S. agriculture and food system to one that produces affordable, healthful foods for consumers; reduces air and water pollution; and builds healthy soil for the farmers of tomorrow. She holds a master’s degree in public affairs and environmental policy. See Karen’s full bio.

Support from UCS members make work like this possible. Will you join us? Help UCS advance independent science for a healthy environment and a safer world.