No Mail, No Phone, No Solutions! 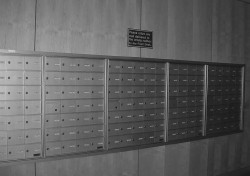 The Post Office’s decision to stop delivering to individual mailboxes in San Francisco SRO’s —which City Attorney Dennis Herrera challenged in a lawsuit that is now on appeal—is now causing additional problems for the city’s poor: an inability to qualify for lifeline phone service. As the point person for Lifeline at the Central City SRO Collaborative, it’s not an easy task having to deny certain tenants’ access to Lifeline based on the fact that their address is not recognized by the U.S Postal Service. When a carrier company such as Nexus cannot process a client, they usually encourage their clients to have their residences approved by the U.S Post Office, not realizing that the Post Office is causing the entire problem by violating local and state laws, as well as the U.S. Constitution, in refusing to deliver individualized mail to many SRO’s.

We don’t usually think of a mailbox and a valid home address as a luxury. It’s something which is supposed to come with one’s home, right? Tenants from many residential hotels, especially the All Star Hotel in the Mission’s District would beg to differ. The U.S Postal Service doesn’t consider the All Star Hotel (2791 16th street, SF, CA, 94103) as a valid address.

At the All Star hotel, apprehensive tenants wait patiently as the mail-delivery person throws a large bundle of mail in the staircase or outside the building for all eighty-six residents. Due to the lack of individual mailboxes, the desk-clerk has the tedious task of separating and distributing the mail to all the rooms. With many other duties to respond to, the Desk Clerk is faced with upset tenants whose important benefit information, checks, and other pieces of
important mail often goes missing.

Where affordable Lifeline telephone service is a commonly used service in most residential hotels within the low-income community, tenants from hotels where there are no individual mailboxes do not have access to this service because their addresses are considered invalid.

In 2009, San Francisco City Attorney filed a lawsuit against U.S Postal Service for lack of adequate services in Single Room Occupancy (SRO) hotels. Two years later, Judge Richard Seeborg ruled in favor of the U.S Postal Service, denying all claims that were raised against them, including discrimination against residents living in SROs and violation of these residents’ first amendments rights. Judge Seeborg also agreed that receiving mail is a first amendment right but inserted that the U.S Postal service is permitted to make restrictions on modes of delivery, so long as the restrictions are “reasonable.”

On what grounds does the Postal Service justify treating permanent tenants of residential hotels as second class citizens? How is this reasonable? According to them, SRO residences are hotels and thus the people residing within should be treated separately than tenants who live in condos or apartment buildings.

La Tonya Jones, a tenant from the All Star Hotel states, “It’s really inconvenient to not have our own mailboxes but we deal with it. What frustrates us more is that none of us in this hotel is able to get Lifeline cellphone service. I have been trying to get one for years now. Each time I try, I am told the address for my building is invalid and we can’t do anything about it.”

The Post Office is doing a great disservice to the members of its community by being a hurdle in their quest to access affordable telephone service and their right to private mailboxes. These are members of the community who need this service the most.