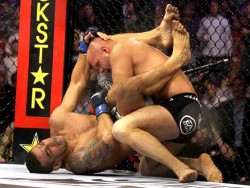 But the problem for this emerging and evolving sport isn’t the satisfaction of its few million hard-core fans, but the recruitment of the hundreds of millions of others who remain puzzled by what comes off as little more than a new template for bloodsport. The blunt truth is that the latest crash and burn of a non-household MMA name, who was pushed as a transcendent superstar, won’t help the cause.

Russia’s Emelianenko had seemed indestructible in a nearly decade-long streak of 28 matches without a loss before he got careless in the opening moments and Brazil’s Werdum clamped an unbreakable triangle choke-armbar combination. OK, you can’t win ‘em all, the MMA enthusiasts explained. The legendary Frank Shamrock – a Strikeforce TV commentator who Saturday announced his retirement from the ring – said, “I’ve felt that tap. I’ve made it myself. That’s why this is such an amazing sport.”

Fedor himself, whose inscrutability in victory comes off a bit like blandness in defeat, said through his tearful translator Tania, “The one who doesn’t fall, doesn’t stand up.”

And the bubbly Werdum, a new star born in a frozen moment promoter Scott Coker called “Rocky-esque,” said, “I won tonight but Fedor is the best. He is my idol.”

What all these comments miss is that MMA is a global cult in search of long-term industrial legs. It is not some private gym challenge between faceless toughs. If the whole enterprise comes down to parity, or a complex variation on the National Football League motto “any given Sunday,” then the task of building bankable stars is considerably more formidable than executing jiu-jitsu from your underneath guard. In a seasonal big event commanding a top ticket of $400, Fedor didn’t deliver a Thrilla from Manila; he simply knocked Werdum to the canvas, made a split-second tactical mistake as he went for “ground and pound,” and wound up submitting faster than you can hum a verse of the “Song of the Volga Boatmen.”

(Coker said the show drew more than 12,000 fans for a gate of a little over $1 million. There were patches of empty seats at HP Pavilion at every price level.)

Without taking anything away from Werdum – I’m not volunteering to face the dude in either an octagon cage or a blind alley – he doesn’t have the most elite MMA resume. The fact that he bounced over to Strikeforce after being cut in 2008 by the more established Ultimate Fighting Championship, following a couple of ugly losses, will only fuel the ungenerous line on Emelianenko: he allowed his control-freak promotional team to sabotage negotiations with UFC before signing with Strikeforce, and in so doing he ducked the top tier of competition for the sake of tending the garden of his empty mystique.

Presumably Strikeforce will rematch Werdum and Fedor, with the promotion’s official heavyweight champion, African-Dutch hulk Alistair Overeem, waiting in the wings. Meanwhile, the MMA world wonders whether UFC champ Brock Lesnar, who faces Shane Carwin next Saturday in Las Vegas in the former collegiate and pro wrestling star’s first match since life-threatening abdominal surgery, has staying power – or whether hem too, will find himself on the wrong end of a star-crossed punch or painful joint lock.

It’s just not a formula for preaching to the unconverted. Fedor’s aura took a hit hours after the U.S. soccer team got eliminated in the World Cup, setting off a new round of sirens for a game the world loves but Americans have a hard time taking to their bosoms. These marketing issues are mirrors. When goals are as frugal as soccer’s, the seemingly random distribution of scoring is hard to wrap the mind around. Similarly, if MMA is so wild and crazy that its reputed greatest all-time performer can go down quiet and short, and without larger meaning, then the grand pooh-bahs have some ‘splaining to do.

Irvin Muchnick, author of CHRIS & NANCY: The True Story of the Benoit Murder-Suicide and Pro Wrestling’s Cocktail of Death, blogs at http://wrestlingbabylon.wordpress.com and is @irvmuch at Twitter.