“No Free Lunch” Congressman’s Other Gaffe 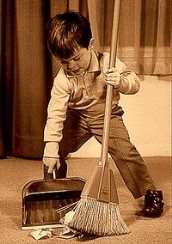 Georgia Republican Congressman Jack Kingston made headlines just before Christmas for suggesting that students receiving free school lunch should be required to “pay a dime, pay a nickel to instill in them that there is, in fact, no such thing as a free lunch.” He even proposed students sweep floors in exchange for school meals. Rep. Kingston wants to teach students personal responsibility, but the Congressman sets a very poor example in that regard. Worse, the statistic he cited to support his claim that the school meal program needs “nickels and dimes” from low income children isn’t even valid.

Rep. Kingston told fellow Republicans at a Jackson County (GA) Republican Party meeting that he had made his suggestion to the Secretary of Agriculture, who heads the USDA. The USDA oversees the school lunch program, which the Congressman characterized as “very expensive.” While admitting that forcing school children to contribute a tiny sum towards the cost of their school meal “would probably lose you money”, Kingston nonetheless gushed, “Think what we would gain as a society in getting people – getting the myth out of their head that there is such a thing as a free lunch.”

But when his proposals were reported outside the confines of the Jackson County meeting, generating blowback ranging from derision to outrage, instead of owning his Dickensian ideas, Kingston blamed Democrats for posting his comments on YouTube, claiming they were plotting to use his remarks “for fundraising.”

The Congressman then tried to distance himself from his original statements, insisting that he was not targeting low income children. “This is not targeted to any one group. It would be very helpful for kids in any socio-economic group to do chores and learn the work ethic.” he said on CNN’s “New Day.”

Not targeted to any one group?

Nice try – but who exactly does the Congressman think receives free school lunch except low income kids? Kingston recently chaired the House Appropriations subcommittee that oversees funding for school nutrition programs, so presumably he knows that free school meals are available only to students whose families earn just 130% of the federal poverty guidelines.

Students whose families earn up to 185% of the poverty guidelines already “pay a dime, pay a nickel” as Kingston suggested (in fact they pay 40 cents for their reduced price school lunch.) Students from higher income families can buy school meals at prices that vary by school district but are usually in the $2-$3 range. Is he suggesting these kids should also sweep floors, in addition to paying for their lunch?

Despite his attempt to rewrite his previous remarks, Kingston clearly felt that it was poor kids who needed a work ethic instilled via his “work for lunch” plan. His subsequent attempts to step away from his own statements show a regrettable inability to take responsibility for his beliefs, setting a very poor example for students everywhere.

Kingston cited the statistic that “school meals have an error rate of 16%” as proof that the meal program needs the “dimes and nickels” he thinks the poorest kids should contribute to what he called a “very expensive” program. The error rate, or “improper payment rate”, as it is technically called, is defined as “any payment that should not have been made or that was made in an incorrect amount (including overpayments and underpayments)”.

Although the Congressman no doubt got that 16% figure from the USDA, as it turns out, the federal government has no accurate idea of what the current “error rate” is. The most recent reliable numbers are in the October 2007 Access, Participation, Eligibility, and Certification (APEC) Study done by Mathematica Policy Research, based on data from the 2005-06 school year.

But is an error rate from 2005-06 really relevant to what is going on in school meal programs in 2013-14, given all of the recent changes to how those programs operate?

For example, the traditional way students got free lunch was by filling out a meal application form that asked for family information including income; these forms have had a notoriously high error rate. Despite being low income, students may be denied school meals because the parent neglected to sign the form. Or a parent may mistakenly list weekly income rather than monthly, leading to a student being incorrectly approved for free meals. Errors can also occur on the administrative end, with students being assigned an incorrect level of benefits.

To help eliminate these kinds of “user errors”, the Healthy Hunger Free Kids Act of 2010 set benchmarks for states to increase the usage of “direct certification”, a more reliable method which automatically enrolls students in the school meal program if they’re already enrolled in certain other government programs such as SNAP (formerly called food stamps.) An administrator with the New Hampshire Department of Education recently credited the direct certification process for that state’s 66% increase in the number of students eligible for school meals compared to 10 years ago.

Due to the increased use of direct cert, the error rate has likely declined substantially from even just a few years ago. That’s good news, because since 2010, the feds have been on a tear trying to root out “waste, fraud and abuse” in government programs. In 2009, total improper payments, which include both overpayments and underpayments, for all federal departments totaled $98 billion.

As a result, an Executive Order dated November 20, 2009, was signed by President Obama, ordering government agencies to take proactive steps to reduce the amount of their improper payments. The Improper Payments Elimination and Recovery Act of 2010 (IPERA) amended earlier laws dating to 2002 on this same issue.

Government agencies like the USDA were directed to reduce the amount of their improper payments, and make public annual accountings of their progress to their Inspectors General, and the Office of Management and Budget, to review for compliance and progress.

So each year, the USDA cranks out an Agency Financial Report (AFR), like this one for 2012. On page 173, the report states that the improper payment rate for the National School Lunch Program for Fiscal Year 2012 was 15.53%, which met the agency’s target for reduction and was less than the prior FY 2011 rate of 15.98%, but that is the total “improper payment rate” including both over- and underpayments (and is the figure cited by Rep. Kingston.)

That “total” figure is almost certainly not accurate. Why not? Here are some other quotes from the same 2012 AFR:

“The School Breakfast, National School Lunch, and Child and Adult Care Food Programs (CACFP) do not have administrative infrastructure or methods for producing yearly estimates of improper payment rates and dollar values.” (page 197)

The 2011 version of the AFR contained an almost identical statement, indicating that “the NSLP information reporting for FY 2011 is based on error rate for School Year 2009/10 times the FY 2010 outlays” (page 219).

What does all that jargon mean?

It means that it is very expensive and time consuming to have a comprehensive APEC report done, as Mathematica did in 2007, wherein actual data from 2005-06 was collected from schools, and crunched to yield actual error rates, and their costs to taxpayers.

It means that the USDA does not have the time or money to collect that data and crunch it each year to determine what the actual amount of improper payments is. Instead, each subsequent report takes figures from the previous year, and massages those prior year figures to make projections (or you might call them estimates, or guesses) about what the error rate might be for the current year.

Perhaps, like me, you are thinking that taking 2005-06 school year data, making a guesstimate each year as to how it might have changed, and using that guesstimate as the basis for doing the same thing the next year, is not really a very reliable means of determining the error rate in school meal programs 8 years later. Turns out government auditors don’t think so either.

The Office of the Inspector General (OIG) of the USDA conducted an audit of the 2012 AFR and published its own report in March 2013.

The purpose of the audit was “to determine whether the [USDA] complied with the Improper Payments Elimination and Recovery Act of 2010 [IPERA] to effectively reduce its improper payments.” The result? The OIG “determined that USDA did not comply with IPERA for a second consecutive year.”

The section of the audit most relevant to the Food and Nutrition Services (FNS) school meal programs was this, on pages 4-5:

“FNS’ National School Lunch program (NSLP) and School Breakfast program (SBP) reported estimated improper payment percentages of 15.53 and 25.18, respectively….FNS stated that the Healthy, Hunger-Free Kids Act of 2010 included new tools and strategies that will help reduce errors in NSLP and SBP…Officials with FNS are aware that its baseline for estimates of improper payments may be unreliable. FNS developed the current formulas used to estimate improper payments rates based on a previous study [the Mathematica APEC study]. Since the study examined program figures from school year 2005 only and cannot provide confidence levels for other years, we cannot rely on estimates projected from this study.”

So apparently, the 16% error rate figure that Rep. Kingston cited isn’t considered by the USDA’s OIG to be a reliable estimate of, well, anything, because of being based on an outdated model.

Although a new APEC study has been planned examining data from the 2012-13 school year, it is not expected to be available until later this calendar year. At that time we may have more accurate information on the true cost to taxpayers of overpayments in the National School Lunch Program. Meanwhile, perhaps our elected officials ought to think twice before spouting statistics that the OIG’s office has deemed “unreliable.”

The idea of the “free lunch” dates back to the mid nineteenth century, when saloons enticed customers in with the promise of a free lunch for anyone buying a drink; unbeknownst to the customer, the price of each drink was already high enough to cover the cost of the lunch. The phrase “There is no free lunch” came to mean: Things that seem “free” are always paid for by someone.

Here in California, where by state law public school students cannot be charged school fees to participate in educational activities, it feels especially odd that Georgia Congressman Kingston chose this one single aspect of public education to teach children that “There is no free lunch.” Here, the entire public school education is “free” – the textbooks, the instruction, the music or art class, even the mandatory many days of mind numbing standardized testing is all “free”.

Adults understand that it is our tax dollars that go to pay for public education, just as they go to pay for school meals, but why should the meals be singled out as the focus of a lesson for kids on how none of this is really “free”? Why not ask the kids to “pay a nickel, pay a dime” for the “right” to be tested on the controversial new national Common Core State Standards, so that they understand that there is a cost to everything in life?

Oh wait – Georgia has already bailed on the Common Core, claiming it was too expensive.