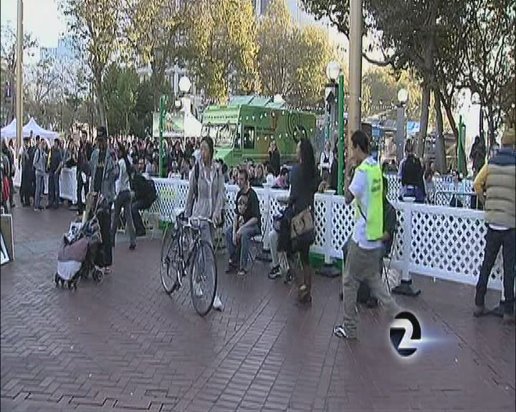 The September 5 opening of the UN Plaza Night Market was a tremendous success. Turnout exceeded projections, to the point where some food trucks ran out of food. Credit goes to DPW Director Mohammed Nuru and Carolyn Diamond of the Market Street Association for taking leadership in making it all happen.

This first night was a learning experience. I was talking to Nuru as he was immediately noticing the need for more chairs and tables, and a more visible presence adjacent to Market Street.

Establishing public interest in eating and drinking  in UN Plaza after dark is no small accomplishment. But having done this, the Night Market now must add more free activities, particularly for kids in its early hours.

To paraphrase Dylan, the Night Market needs more jugglers and clowns to play tricks for us. It needs comedians, magicians, and a space for instructional yoga.

I was there from 4pm-6pm and saw almost no kids. Most likely this was because there was no face painting or other kids activities.

I saw a lot of SRO tenants at the event. Some enjoyed the food but others lacked the money to partake. If we have an event which essentially requires participants to spend money, then many of those living near UN Plaza won’t be attending Night Markets in the future.

Nuru and Diamond did so much to pull off the event that they cannot be expected to also bring in kids and free adult programming. They’ve done their share and now it’s up to the rest of us to make this the type of event enjoyable to those of all income levels.

Someone reading this might know jugglers, clowns or comedians who can either raise the money to perform at Night Market or can do so as volunteers. Same with the face painting and instructional yoga. In NYC’s Bryant Park, yoga mats are donated by lululemon. Is there not a San Francisco company that will do the same for a UN Plaza yoga program?

If you want to offer services, or want to donate money directly to the Night Market, or just want to offer ideas for the event leaders, contact Carolyn Diamond at Carolyn@marketstreetassociation.org

For some, any event in Mid-Market offers a new excuse for tech bashing. People were tweeting that tech folks weren’t mingling with local residents. Some saw the entire event, especially food trucks, as “gentrification.”

People coming to public events typically talk to those they know. I don’t ever recall complaints that attendees at Hardly Strictly Bluegrass are not “mingling” with strangers, but a higher behavioral standard apparently applies to Mid-Market events.

Equating food trucks with “gentrification” is another reason that word should be retired. It is simply too often misused.

Originally used to describe a process in England where working class residents were displaced from their homes and neighborhoods and replaced with the affluent, the term now is used to describe a range of cultural developments that have nothing to do with housing or displacement.

There was an Opera opening last week. I heard no reports of the well-heeled attendees lining up at food trucks before the show.

I ordered a burrito from a truck selling Indian Street food. Are burritos now the food choice for the gentry?

I think the Night Market unites people far more than it divides them.

The Night Market’s popularity is astonishing to those of us who have waited years for this type of programming to occur in the space. And if people pitch in to help, the upcoming Friday night markets will be even better.