Next Steps for CA Housing Advocates 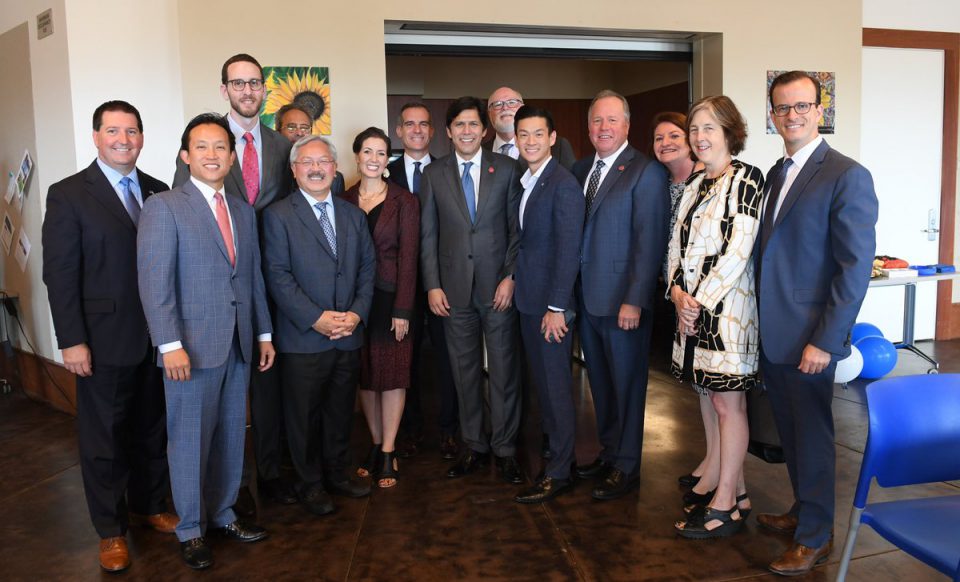 At last Friday’s historic housing bill signing ceremony, legislators insisted that 2017 was not a one-time deal. Every speaker said that tackling the housing crisis required further action in 2018, and even Governor Brown concurred—though he asked for fewer than the 15 bills he signed on Friday.

So what should be housing advocates’ next steps? And are there really legislative openings in 2018 or will election year politics get in the way?

Costa-Hawkins has dramatically driven up in rents in rent-controlled jurisdictions across the state. A viable statewide campaign to repeal/reform it is long overdue.

Dean Preston of Tenants Together wrote on September 29, “We urge Governor Brown in his final year in office to ramp up funding for affordable housing and to address the displacement crisis, not by further enriching developers, but by repealing the disastrous Costa Hawkins Rental Housing Act so that cities can protect their residents from displacement with strong local rent control.”

Preston knows that repealing Costa-Hawkins is not on Brown’s to-do list for his final year in politics. But his describing the housing bills as “further enriching developers” ignores their chief impact.

The fifteen bills primarily benefited working-class and low-income tenants. They are the ones who will live in the housing built with the increased affordable housing funds. They, along with some middle-class families, will be the ones benefiting from the revival of inclusionary housing.

Tenants Together viewed SB 35 as a bill causing “gentrification and displacement” in Oakland. But Oakland built over 2700 units from July 2016-17 with only 6% affordable. Market rate developments without any on-site affordable units have been the norm in Oakland.

Thanks to the state housing  package this will change. The city can now enact inclusionary housing and fund more permanently affordable housing for low-income people who otherwise could be displaced.

None of the bills vital to low-income tenants happen without SB 35’s inclusion in the package. We saw this play out last year, when we lost $400 million in housing funding because Brown did not get the streamlining bill he wanted.

Governor Brown has always made passage of a development streamlining bill conditional on his support of any other housing measures; SB 35 was the linchpin for Brown signing SB 2, SB 3 and other key measures (I also don’t see SB 35 standing alone as a “developer’s giveaway” as Tenants Together also tweeted; it merely requires cities to allow more housing).

Tenants Together also tweeted “there are ZERO tenant protections in this package.” Since getting tenants into permanent affordable housing is obviously a “tenant protection” what the group meant was that there were no bills strengthening rent control and eviction protections.

Why were there no new rent control bills? Where was the statewide campaign around such measures? Housing advocates spent years trying to get what became SB 2 passed; there has been nowhere near such efforts to repeal or revise Costa-Hawkins, a far heavier political lift.

Assembly member Richard Bloom of Santa Monica introduced a Costa-Hawkins repeal measure without even consulting with tenant groups; there was never a viable campaign to pass it.

Bloom’s effort got the issue back on the table, but there has to be a real statewide campaign to overcome the massive landlord opposition to changing Costa-Hawkins. There will ever be a majority of legislators who will challenge the real estate industry without being strongly pushed by tenants in their home districts.

2018 is a perfect opportunity for tenant groups to get specific commitments from Democratic candidates in primaries—especially those running for Governor— on repealing/reforming Costa-Hawkins. That would lay the groundwork for a full out campaign in 2019.

At Friday’s bill signing many noted the new affordable housing money was just a start. Toni Atkins’ SB 2 raises $250 million annually. That’s basically all the new money available until voters pass the $4 billion housing bond in November 2018. This money would not be available until 2020 (bond money takes longer to access than general funds).

So can advocates extract more affordable housing money from Governor Brown in 2018? Perhaps sold as a one-time appropriation that adds to housing coffers while awaiting bond money? Or targeted to housing for homeless persons, which is urgently needed across the state?

Brown could unconditionally support homeless funding, but I cannot see him backing broader  housing funding without connecting it to another SB 35-type bill. Senator Scott Wiener implied when he spoke at the signing ceremony that he had a lot of ideas for bills for 2018; if he can come up with another bill Brown likes to expedite development, California could get an extra $250-500 million in housing funding next year (a deal connected to CEQA reform likely too heavy a lift next year).

Many advocates who backed SB 35 will not support exchanging new limits on local control over development for one-time funding. So focusing on homeless funding seems like the best bet for 2018.

2017 was an historically productive legislative year because moderate Democrats could vote for tax hikes without facing voters. 2018 is a different story. I cannot imagine getting another 2/3 vote for a fee increase for housing as occurred with SB 2;  far more likely is getting money for homelessness out of general revenues.

Passing tenant rights measures in non-election years is very difficult. We saw on Ellis Act reform in 2014 that swing legislators fear alienating realtors more than tenants. Tenants have power in many areas across California but realtors are everywhere.

While the 15 housing bills were only the beginning, momentum is more likely to resume in 2019.  Any of the top Governor candidates elected will be far more pro-housing than Jerry Brown, so significant progress in 2019 can be made.

To win in 2018 or 2019 activists must mak housing an issue in every contested California race. Politicians remember who elected them. If activists want legislators to take tough votes on Costa-Hawkins and future revenue measures, they need to show support in electing their allies.

Randy Shaw is Editor of Beyond Chron. He discusses how to get politicians to support housing in The Activist’s Handbook: Winning Social Change in the 21st Century.