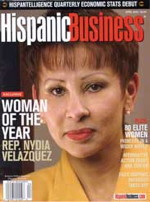 The renomination of Congressional incumbents in the two contested Latino districts in New York’s Democratic primaries yesterday tells different stories about the state of Latino politics in the city. Nydia Velazquez was reelected in her newly-drawn Brooklyn-Queens-Manhattan district in what many saw as the toughest challenge she has had in her 20-year tenure in the Congress, while the South Bronx’s José Serrano was unopposed. With the New York State Congressional delegation shrunk by two seats because of the 2010 reapportionment, Latinos not only retained their two seats but they now have more clout because this is a smaller delegation and because of their seniority. The bid to elect a third Latino to the city’s Congressional delegation was unsuccessful but clearly illustrates the growing political clout of Latinos in that newly-drawn upper Manhattan district that includes a small part of the Bronx.

According to the unofficial tally of the NYC Board of Elections, Velazquez was renominated with a strong 58 percent of the vote. Her strongest challenger, term-limited Bushwick City Councilmember Erik Martin Dilan, attracted only 32 percent of the vote, with her two other opponents together getting 11 percent. Because Velazquez was being opposed by the powerful Chairman of the Brooklyn Democratic Party Committee, Vito Lopez (he’s Italian), her victory was a testament to her popularity and represented a major defeat for the county’s political establishment.

Lopez, it was rumored, was so determined to remove Velazquez that he not only endorsed and promoted Dilan but was also supposedly behind the candidacies of her two other challengers. Some found it strange, for example, that the Occupy Wall Street/rapper candidate, George Martinez would run against a progressive like Velazquez when there were quite a number of conservative Democrats he could have been challenging instead.

By beating Dilan, Velazquez also put a bit of a break of the phenomenon of Latino politics as a family business that is a big feature of the Bronx. Dilan’s father, Martin Malave Dilan, is currently a State Senator and co-chaired the state legislatures redistricting tak force. Both are part of the Vito Lopez political machine that includes another Dilan connection, Assemblyman Rafael L. Espinal, who was Senator Malave Dilan’s chief of staff before his election in 2011. Many worry that this type of political incest has been weakening Latino politics in New York for some time.

It has been generally observed that this race has reinvigorated Velazquez and reinforced her political independence. He reelection should also strengthen her positions as the ranking member of the House Small Business Committee and senior member of the Financial Services Committee.

The Dominican Challenge to Charlie Rangel

The challenge by the Dominican-American State Senator, Adriano Espaillat, to longtime incumbent Charlie Rangel in the so-called “Harlem district,” attracted greater national attention and drama. While Rangel won the primary with 46 percent of the vote, Espaillat’s challenge was strong — attracting 39 percent. This newly-drawn district, which covers most of northern Manhattan, including Harlem, Washington Heights and East Harlem, has a 53 percent Latino voting age population and one estimate put the Latino share of its actual voters at 38 percent. This would seem to indicate that the limitation of Espaillat campaign was not being able to reach out much beyond his Latino base. On the other hand, Rangel’s three African-American opponents together garnered only 15 percent of the total vote.

Once more detailed information on the returns of this race become available, it will be possible to analyze the complex political and voting dynamics of this diverse district. Although Espaillat would have been the first Dominican-American to serve in the US Congress if he had won the primary, it was not clear that the enthusiasm level for such a historic event was as high as some expected within the Dominican community. It will be interesting to see what the voter turnout was like in Dominican areas compared to other groups. In terms of the Dominican political class, there were major divisions about his candidacy, starting with Rangel’s campaign manager being a prominent Dominican community leader.

Espaillat has told the media that he does not plan to run for reelection for his State Senate position, although there have been “sightings” of petitions with his name on it for the post. As an example of the divisions in the ranks of Dominican politicians on the Espaillat Congressional candidacy, Assemblyman Guillermo Linares has declared his intention to run for Espaillat’s Senate seat and endorsed Rangel in the primary. The plan, apparently, is for Linares to have his daughter, Mayra, run for the State Assembly seat he would be vacating. Guillermo Linares was the first Dominican to be elected to major elected office in the city when he was elected to the NYC Council in 1991. Espaillat will not be disappearing from the political scene anytime soon (and his opponents like Moises Perez will no doubt be around as well), so it will be interesting to see how Linares’ political plans will unfold this year.

The Rangel victory is also of some relief to the so-called “Bronx Boys” connected to what remains of the Bronx Democratic Party machine. Espaillat received the support of such Puerto Ricans as his colleague in the State Senate, Gustavo Rivera, and former Bronx players Fernando Ferrer and Adolfo Carrion, but the actual political machinery in that county is controlled by Rangel supporters like the borough president, Ruben Doaz, Jr. and Assmblyman José Rivera, along with the somewhat politically aloof Congressman José Serrano and his son, State Senator José Marcos Serrano. But beyond these political players, it will be interesting to see whether or not Senator Rivera was able to deliver the voters in his northwest Bronx district to Espaillat.

The Rangel victory also raises questions about his succession plans. Will he serve out his two-year term or resign before then to force a special election where he will be able to select his successor? There is already much speculation about who this would be in terms of African-Americans, but this speculation fails to take into account Espaillat’s strong showing and the growing movement within the Dominican community for a Congressional representative. The campaign this year to press for a Dominican Congressional district was strong and along with Espaillat’s candidate has perhaps created enough of a political momentum in the district to continue to challenge elite African-American political hegemony over this majority-Latino district. At the same time, this primary may have gotten the point across to the Harlem political class that they need to become much more attentive to addressing the needs of the district’s large and growing Latino population in ways that increase their support in this community.

Also of importance to the Latino community is the nomination of Queens Assemblywoman Grace Meng as the first Asian-American to serve in New York Congressional delegation. This increases the number of progressive people of color in the delegation with common agendas. On the other hand, the resounding defeat of Brooklyn City Councilmember Charles Barron, which lost to Assemblyman Hakeem S. Jeffries 72 to 28 percent, was a big loss for the many Puerto Rican/Latino activists who were part of Latinos for Barron in this district that is 16 percent Latino voting age population.

The most troubling aspect of these primaries, however, was the extremely low turnout because of the change in the date from the traditional September to late June primaries, among other factors. Most observers were projecting a low turnout of around 15 percent. But if the preliminary Board of Elections numbers hold up. The turnout was actually slightly below this. They range from a low of 12.3 percent in Velazquez’ 7th Congressional District, tp 15.6 percent in Grace Meng’s 6th Congressional District.

A recent NYC Campaign Finance Board report documented the persistent problem of low voter turnouts in New York City and recommended some concrete changes that promote greater participation. There is also a Voter Empowerment Act of New Yorkthat has been introduced in the State Legislature that would make changes to make it easier to register to vote. These are the types of changes that have made high voter participation in Puerto Rico almost legendary (it hovers around 80 percent there), but that have been ignored in New York and most of the United States. One theory is that it is in incumbents’ self-interest to dampen voter participation, so it may be ironic to have to go to them to approve legislation that would change that, kinda like what happened to proposals for an independent redistricting commission.

Yesterday’s primaries resulted in a continuity in and strengthening of Latino representation in Congress for New York Latinos, and a greater Latino role in Congressman Rangel’s operation. The city’s growing Dominican community has also been able to flex its political muscles like never before in ways that can perhaps serve as an inspiration to other Latino immigrant groups like the Mexicans, Ecuadorians, Colombians and others. With the uncertainties before us in terms of November’s Presidential election, these primary outcomes were generally encouraging.

Angelo Falcón is President of the National Institute for Latino Policy (NiLP), for which he edits The NiLP Network on Latino Issues. He can be contacted at afalcon@latinopolicy.org.