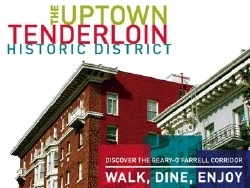 San Francisco is an internationally renowned city, but some of its best areas are only known by insiders. This is particularly true outside the major tourist districts, and when streets worth visiting are not publicized. The Geary and O’Farrell corridor in the historic Uptown Tenderloin neighborhood is one such undiscovered gem. Even many longtime residents overlook its historic architecture, restaurants, bars, galleries and entertainment venues. To help attract people to the Uptown Tenderloin Historic District, the Uptown Tenderloin organization has produced a walking map that includes photos and descriptions of many of the corridor’s historic buildings, and describes the offerings in restaurants, bars and entertainment venues. Many will be surprised at the rich history of these two streets, and the area’s attractions will not remain secret for long.

The first walking map for what is becoming one of San Francisco’s hottest neighborhoods – the Geary and O’Farrell corridor in the Uptown Tenderloin Historic District – is now available at the San Francisco Visitors Information Center at Hallidie Plaza at Powell and Market Streets and in other nearby locations (it can also be downloaded here.) The map highlights the neighborhoods diverse ethnic restaurants, hip bars and cutting-edge contemporary art galleries, and features over 30 historic buildings listed in the National Registry of Historic Places.

What’s striking about the Geary-O’Farrell corridor is the number of new businesses that have opened when there is vacant retail space across San Francisco and the entire Bay Area.

Why are business owners attracted to the O’Farrell-Geary corridor? I put this question to Doug Dalton, owner of Swig (561 Geary) and Bourbon & Branch, the first time I met him and he said he was “attracted by its history.” David Williams could make his sea salted dark chocolate caramels in any neighborhood, but also was drawn to open Hooker’s Sweet Treats in the Uptown Tenderloin by “its history and positive environment.”

Some of the new owners, like Bill Parviz, who opened his Café Ariana in January 2010, live near their establishments. Parviz has turned his café into a community meeting place, and knows many of his customers by name.

Sitting at one of Parviz’s outdoor tables provides a view of the historic Castle Apartments (825 Geary) and Hotel Union (811 Geary) across the street, along with the popular Whisky Thieves bar (839 Geary.) Café Ariana is almost adjacent to the Alhambra Apartments (860 Geary) and is two blocks from the Alcazar Theater, both of which are among San Francisco’s most striking structures.

A Haven for Ethnic Restaurants

While many are familiar with the great Southeast Asian restaurants in the Uptown Tenderloin’s Little Saigon, the Geary and O’Farrell corridor has many dining spots whose popularity deserves to be more widespread.

Lahore Karahi (612 O’Farrell) was recently featured on KQED, and you can still find its owner cooking the Indian-Pakistani fish that has made its reputation. Alaturca (869 Geary) offers some of the Bay Area’s most authentic Turkish food, while Pho Tan Hoa (431 Jones) offers great Vietnamese Pho on the other side of the neighborhood from Little Saigon. Up the street from Pho Tan Hoa are two popular Indian restaurants, Shalimar (532 Jones) and Chutney (511 Jones), and the corner is highlighted by the beautifully renovated Hotel Garland (505 O’Farrell).

The O’Farrell corridor also includes the majestic Hamilton Hotel (631 O’Farrell), the first building west of Chicago to be converted to condominiums. Legendary actors Vivian Vance, Florence Henderson, and Lauren Bacall all lived at the Hamilton, whose recent renovation has restored its original architectural grandeur.

The walking map was designed by West Office Exhibition Design, which is also working on the creation of an Uptown Tenderloin Museum at the Cadillac Hotel on Eddy Street. Funding for the project came from the Fifth Age of Man Foundation and local property owners.

The walking map follows the installation of historic plaques on buildings throughout the Uptown Tenderloin Historic District, and in early 2011, the Taylor Street Arts District historic mural renovation project will commence restoring historic advertising murals on Taylor Street to their original splendor.

The Uptown Tenderloin historically housed many of San Francisco’s most popular bars and restaurants. The Geary and O’Farrell walking map should help revive this legacy.

Randy Shaw is the Editor of Beyond Chron and a Board member of Uptown Tenderloin, Inc.