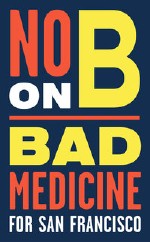 A new study, which concluded that private sector workers are compensated at an equal rate as public service employees in California, reveals the well-intentioned but ultimately misguided logic behind public defender Jeff Adachi’s Proposition B, which appears on the November 2 ballot.

Without these benefits, public employees would actually earn about 7% less than their private sector counterparts. These findings show that Adachi has completely misread the causes of San Francisco’s current budget woes.

Like the city of Vallejo, which declared bankruptcy due to its inability to continue paying the exorbitant salaries of its police and firefighters, the largest line item in San Francisco’s city budget consists of compensation for police and fire.

Common sense dictates that the salaries of the City’s police and firefighters should be slashed. Unfortunately, Adachi doesn’t seem to have the guts to come out and say this.

Instead of calling out police and firefighters for retiring with 90% of their income at age 50 and pulling down those outrageous six figure salaries that everyone has heard about, Adachi is misleading the public by blaming civil servants for the City’s budget deficit.

That is the rationale behind Proposition B, which could triple the amount that hardworking librarians, park workers, janitors, water inspectors, and others would have to pay to maintain their health insurance and retirement.

However, a recent survey by City Hall’s Department of Human Resources found that police and firefighters are by far San Francisco’s most highly compensated employees with starting salaries of $82,000 and $73,000 respectively.

This does not include the thousands of dollars of overtime that are routinely wracked up during the course of a year.

Adachi is right to be concerned that funding for social service and drug treatment programs is being crowded out. However, he needs to be honest about the problem and design a measure that specifically targets the police and firefighters and no one else.

Otherwise, Adachi’s attempt to force the City’s civil servants to bear the cost of maintaining their own health insurance and retirement comes off as both mean-spirited and uninformed.

San Francisco would be much better served if voters rejected Proposition B, and if Adachi found the courage to take the City’s police and firefighters head on.