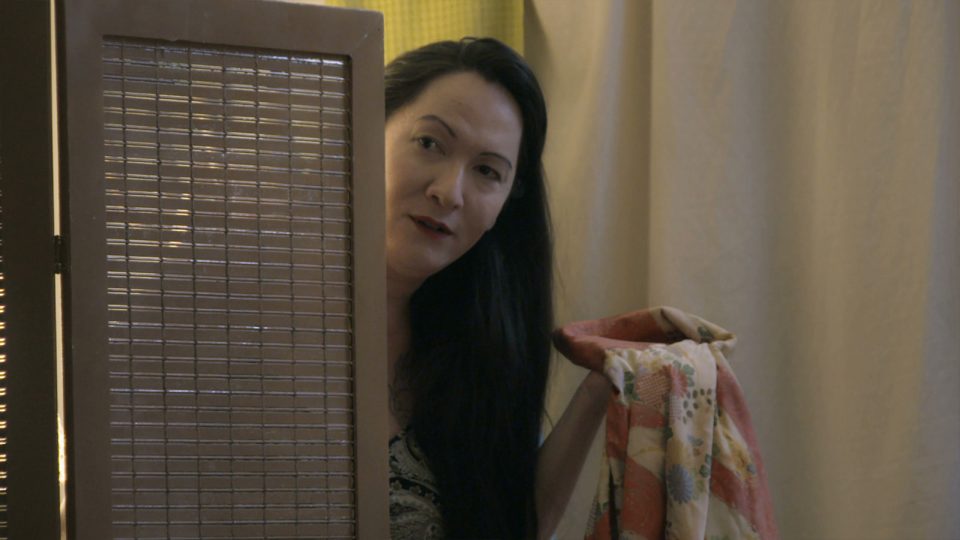 "I Remember The Crows"

Ousmane Sembene’s second film “Mandabi (The Money Order)” set a couple of cultural milestones.  It was the first film to be made entirely in Wolof.  The Senegalese filmmaker’s adaptation of his novella also demonstrated that creating films by, for, and about Africans in their native tongues could be an artistic reality.  Now thanks to a new 4K restoration, audiences can see once again a timeless tale of pride, bureaucracy, and greed that won the Venice Film Festival’s International Critics Prize.

Ibrahima Dieng has been unemployed for years.  Debt has enabled him to barely scrape by with his two wives Aram and Mety and their seven children.  Despite his dire economic circumstances, the religiously observant patriarch still has his pride.

The arrival of a 25,000 franc money order changes the lives of Dieng and his family.  Dieng’s nephew sent the money order, which contains his savings from his Parisian street sweeping job. But Dieng’s job of cashing the money order and setting the bulk of the money aside for his nephew soon turns into a tragicomic nightmare.  Neighbors wrongly assume Dieng’s now rolling in money and want their cut.  Meanwhile, more and more bureaucratic hoops pop up to stymie Dieng’s efforts to claim the money.

The leisurely pace that Sembene’s film starts on will annoy those with short attention spans.  Yet that pace also allows viewers to mentally acclimate themselves to the world the story takes place in.  Seeing a barber artfully use a straight razor to trim nose hairs impresses the viewer with his skill.  Dieng’s family resting during the early afternoon is less laziness than a reasonable response to scorching midday heat.  Equally importantly, Sembene’s addition of mundane details familiar to African viewers shows these viewers not only that their daily reality matters, but that it’s a reality worth sharing with others.

The Western viewer may ask why Dieng didn’t simply come out with the truth about the money order’s purpose once it was no longer a secret.  This writer suspects Dieng was probably still angry with his wives for accidentally letting his neighbors know that he had received his nephew’s money.  An implied threat to strike a wife for a minor infraction shows how much of a temper Dieng can have (or at least reaffirms the casual sexism of “Mandabi”’s world).

More importantly, it was unlikely Dieng would be believed had he told the truth.  Sembene’s film shows that Dieng and the other characters live in a society where money is scarce.  As mentioned before, Dieng’s nephew had to go to Paris to find work while his uncle has been unemployed for years.  In this world, even Dieng’s unwise public display of a modest amount of currency from the bank gets blown out of proportion into the mistaken assumption he’s rolling in money.

Truth stretching, he said politely, thus becomes a survival tool when it comes to having or getting money.  It’s nothing personal whether you claim to be a stranger in town who knows nobody or somebody who deserves payment for handling bank business for you.  Dieng shows himself particularly susceptible to such lies thanks to his weakness for preferring apparently quick and easy solutions in life.

On the other hand, the bureaucratic hoops blocking Dieng’s efforts to redeem the money order can’t be solved by quick and easy solutions.  The Western colonialists who imposed such things as demands for exact date of birth and duplicate photographs may have thought they were modernizing Senegal.  But for people like Dieng, who’ve never needed such things until now, such requirements effectively put them at a strong disadvantage compared to those who’ve successfully exploited the system the colonialists left.

The tragedy of Dieng’s existence comes from his growing surrender to the idea that he’s personally incapable of handling life’s repeated challenges.  An attempt to pawn a wife’s necklace to pay off a debt results in Dieng’s taking an offer that’s only a pitiful fraction of the necklace’s worth.  But it is overreliance on a local insider’s help that ultimately brings Dieng to ruin.

Most of Gustavo Vinagre’s documentary portrait “I Remember The Crows” takes place in the living room/bedroom of the film’s subject, Japanese-Brazilian transgender actress Julia Katharine.  But instead of feeling confined, the viewer feels they’re hearing the story of a life which feels grander in some ways than the setting seen on screen.

The actress/director’s bout of insomnia spurs her to call Vinagre for a late night visit.  Apparently, their prior working relationship and friendship is such that this request is not considered beyond the pale.  It takes a little prompting by Vinagre to get Katharine talking about her life.

Visually, the director’s camera serves as an attentive witness to its subject’s autobiography.  There are no flashy camera tricks seen in the film.  The steady focus on Katharine also discourages the viewer aversion that might come from learning about the film subject’s two pedophilic affairs.

Katharine’s romantic yearnings, the viewer learns, went a long way towards making the relationships seem normal to her younger self.  The great uncle who loved her despite their over four decade age difference was the first person who accepted Katharine’s self-image as female.  Katharine’s 5th to 6th grade relationship with her maths teacher seemed to her a grand passion.  Yet in reality, both older men just treated her as a sexual object of desire who eventually no longer interested them.  The disastrous ending of these relationships, it should be noted, hasn’t lessened Katharine’s fancying older Daddy bear-like men.

Seeing the world through a romantic lens should not be taken as evidence of Katharine’s self-delusion or superficiality.  It’s been a source of strength and hope even in the actress’ darker moments in life.  Her love of romanticism was genuinely shaped by a lifelong love of Hollywood films and stars, particularly “Terms Of Endearment,” actress Vivian Leigh, and Hollywood award ceremonies where an award recipient cries like a telenovela character.  Katharine admits her own getting into acting came out of a desire to receive awards.

“Terms Of Endearment” matters to Katharine because it was the movie she bonded over with her mother as well as the one that best describes their relationship.  The free rein Katharine’s mother gave her in her younger days could reflect the mother’s not wanting to shackle her daughter to the social expectations that made the older woman’s life miserable.  On the other hand, Katharine’s mother blames her child’s openness about her sexual orientation with ending the mother’s marriage and turning her into the family pariah.

The subject’s relationship with her father may have been strained by the latter’s starchy behavior.  But it didn’t kill her fascination with her father’s birth culture, as can be seen in an impromptu tea ceremony.  That fascination eventually led Katharine to work in Japan for a while given apparent Japanese nonchalance regarding  transgender people.  Courtesy of Katharine’s prejudiced Brazilian employers, that Japanese sojourn turned out to be a hell of pay discrimination, lung damage, and homelessness.

Yet despite these and other hardships (e.g. minor cardiac arrest from excess junk food snacking), Katharine has grown to love life more.  True, turning 40 has made her more self-conscious of her appearance.  Yet she still dreams of making a romantic comedy about the relationship between a cisgender male in his 50s and a transwoman.  (That comedy, “Tea For Two,” will be shown with screenings of Vinagre’s documentary.)  Also, Katharine’s insomnia does provide the not inconsequential perk of seeing the sun rise every morning.

There are no lands literally sinking beneath the seas in Valentyn Vasyanovych’s post-war drama “Atlantis.”  Indeed, sights of the ocean are utterly absent given its Eastern Ukraine setting.  And yet Vasyanovych’s film metaphorically lives up to its title thanks to its creation of an atmosphere that’s equal parts gradually failing state and already buried history.

Viewers who need clear character arcs and event-filled stories should probably skip Vasyanovych’s film.  The film’s story unfolds as a series of tableaux, with big flashy action avoided in favor of slow cumulative moments methodically contributing to a larger whole.  If the reader is familiar with the Roy Andersson film “Songs From The Second Floor,” that earlier film will give a taste of what to expect with “Atlantis.”  Vasyanovych, though, generally stays with the former soldier Sergiy rather than hop around following random characters as Andersson does.

However, “Atlantis” is more dour than even darkly funny.  The movie’s “a few minutes into the future” setting contributes to creating that feeling.  An on screen title tells the viewer they’re somewhere in the Eastern Ukraine in the year 2025.  It’s a year after the end of some unexplained war, probably with the Russian Federation.  Yet the Ukrainians’ triumph feels pyrrhic.  Demobilized soldiers seem trapped in an aimless cycle of simmering frustration.  Unemployment happens way too often.  The shooting may be over, but buried in the land are unclaimed corpses of soldiers and unexploded ordnance.

Given this set up, perhaps it’s unsurprising that greyish, washed out, and dark colors continually dominate the screen.  What bursts of color may be seen in “Atlantis” usually gets absorbed quickly by the greyish environment, as seen during the dumping of colorful molten liquid.  The film’s major exceptions, a wartime burial of a nearly dead soldier and an intimate sequence between lead characters Sergiy and Katya, are the products of thermal imaging.  These colorful scenes’ bracketing “Atlantis”’ story with moments of death and love need no further explication.

Yet it would be a mistake to assume the color sequences present the film’s only visual flourishes.  The detailed foregrounded autopsy of a soldier’s badly decayed corpse delivered by Black Tulip Mission volunteer Katya reminds the viewer of the still unpaid price of the war.  The Big Brother-like projected head of an English accented factory owner telling the factory’s workers they’ve just been made redundant offers a nice metaphor for the larger forces ordinary Ukrainians have no control over.

Poor and unemployed Americans can relate to this theme on an economic and maybe political level.  Certainly they’d find a soul brother in “Atlantis”’ Ivan.  Like Sergiy, he’s a former soldier.  But unlike Sergiy, he displays obvious trouble adjusting to civilian life.  The petty tyranny of a factory manager has gotten on Ivan’s nerves.  Even target shooting practice, which would normally help Ivan blow off steam, devolves from a disciplined display of marksmanship into near-anarchy.  American viewers may be shocked by seeing this character’s reaching his breaking point.

Yet if the viewer feels Ivan’s ultimate fate is not the answer, what is?  Late in the film, an environmental NGO worker points out to Sergiy that the amount of pollution in the land and water will take years if not decades to clean up.  Interestingly, Sergiy’s acknowledgment of that truth as well as his own inner darkness leads to a decision that makes sense for him, if not for the greener pastures crowd.

The meaning of the film’s title is ultimately implied instead of directly explained.  But if post-war Ukraine is metaphorically doomed to sink beneath the waves of its problems, at least the efforts of people such as Sergiy and Katya offer the metaphorical possibility of reclaiming their sinking land.