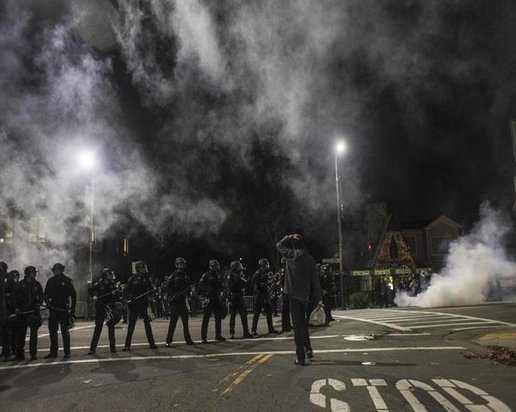 In the past few days, street protests against the Ferguson/Eric Garner decisions have swept the nation. We’ve seen marches, die-ins, freeway closures, and in Oakland and Berkeley, vandalism completely unrelated to police racism.

My favorite tweet from Saturday night’s Berkeley protest came from Dan Lurie, who observed “That every person I saw committing vandalism in #Berkeley tonight was white is such a fantastic example of white privilege.” Nonviolent protests in both Oakland and Berkeley ended up with young whites vandalizing wine shops and other local businesses, alienating many who came out to peacefully protest racist police shootings.

As I wrote before the Eric Garner outrage, “Are Ferguson Protests Effective,” direct action in the absence of a broader campaign or specific targets has never brought meaningful change. Wanting to express legitimate outrage at the latest police shooting/grand jury exoneration, some activists seem trapped in an unproductive pattern of  freeway occupations, marches and clashes with local police.

A media world that strongly backed the Ferguson and Garner protests now promotes how the events turned “violent.” And while the traditional media often focuses on sporadic violence to undermine protesters’ broader message, there seems little dispute that Saturday’s night Berkeley event gave way to violent police-protester confrontations and property damage unrelated to the wrongful killing of African-Americans.

So as occurred in the latter stages of the Occupy Movement, the focus shifts from the underlying crisis to a particular city’s police response to those protesting about the crisis. That’s called taking your eyes off the prize.

Such a shift put primarily white protesters’ conflict with Berkeley or Oakland police at center stage. This diverted attention from the racially-based shooting of African-Americans.  The Berkeley police’s response to protesters is now the issue, and has eclipsed a nonviolent protest against Ferguson-type racial injustice.

Last night, over 300 protesters responded to the Berkeley police’s Saturday night conduct by moving to “take” the intersection of Telegraph and Durant. The actions began as entirely peaceful, yet by late evening the vandalism and violence of the previous night returned.

It’s not that Berkeley police violence against activists should not be protested; it’s that this  became the dominant frame for actions that were supposed to be about preventing police across the nation from unjustifiably killing African-Americans.

Activists need to hold specific people accountable for racially based police killings. Other than white-dominated police unions whose spokespersons are a constant on news shows, who controls and funds the system that perpetuates these outrageous police shootings?

To the extent politicians play a role, both they and their financial donors can be targeted. And if these donors include corporations, they can be targeted nationally.

Recall the ongoing campaign to “Flush Rush” by pressuring national corporations to stop sponsoring Rush Limbaugh’s radio show after the host described female law student Sandra Fluke as a “slut” and “prostitute” for supporting access to birth control. A campaign by Media Matters, MoveOn and other groups led 2600 sponsors to drop advertisements from Limbaugh’s show, and is audience has shrunk dramatically.

Few national corporations want to be identified with racially-based police shootings. A powerful grassroots campaign targeting the corporate backers of anti-reform politicians can get these companies to either publicly renounce their support for the politician or risk losing business. Such campaigns could also lead to corporate pressure on the politicians to support police reforms.

This is just one of many ideas for creating specific targets for a growing movement that needs a focus for its energies. That the energy level has remained high for a few weeks means nothing; reforming police practices and attitudes nationwide is not a short-term campaign.

The Model of Fight for 15

Earlier on the day the Eric Garner decision was announced, Oakland and over 100 other cities had nonviolent protests demanding a $15 minimum wage. The Fight for 15 campaign has achieved remarkable success in 2014 without the conflicts with police that are now a regular part of the Ferguson-Garner protests.

The difference is not that the latter involves police practices. Rather, it’s that the workers engaged with the Fight for 15 have an immediate need for higher wages and have specific targets other than the police present at the protests.

These workers see no reason to get in a fight with police when their goal is to get McDonald’s and other fast food giants to pay higher wages. Their protests could easily take the confrontational approach toward police as occurs in the Ferguson-focused actions, but these workers are keeping their eyes on the real target.

There is an historic opportunity for labor unions, religious groups, and grassroots community organizations to join together to demand nationwide mandated reforms of police conduct toward African-Americans. Blocking freeways, vandalizing businesses, and shifting focus to police crowd control policies do not advance this goal.

Randy Shaw is editor of Beyond Chron. He analyzes the effective use of direct action by Act Up and other groups in The Activist’s Handbook: Winning Social Change in the 21st Century