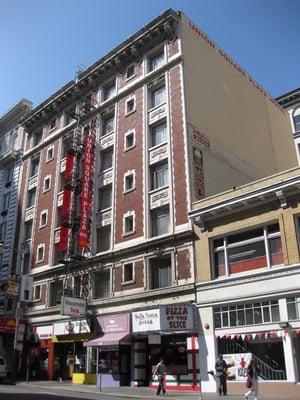 It’s been over a month since San Francisco strengthened its law protecting SRO housing, and it’s already working. Introduced by Supervisor Aaron Peskin last December and later co-sponsored by Supervisors Cohen, Kim, Safai, and Sheehy, the new law was designed to stop the common but illegal practice of renting residential SRO rooms to tourists by the week. Now the law is crystal clear that residential units cannot be rented for less than 32 days.

I wrote in January that “no measure will more quickly or dramatically expand the city’s affordable housing stock this year.” I predicted it would return “hundreds and perhaps thousands of single room occupancy hotel units to the residential market.”

But what I did not foresee is how quickly SRO owners would comply with the new law. Since it took effect on March 17, hotel after hotel that previously advertised weekly rentals now say that they have a minimum one month’s stay.

The Carl Hotel, 198 Carl Street in the Haight Ashbury, has long used it 28 residential SRO for short-term weekly rentals. Now one of the handful of longtime tenants informs us that the hotel is redesigning for residential occupancy, including installing mailboxes. That’s another 20 residential units added to the available housing stock in a neighborhood facing a desperate housing shortage.

One longtime SRO renting residential rooms by the week told a prospective applicant seeking such a room last week “We’re a residential hotel and it would be against the law to rent such rooms to you next week. We recommended that you contact a tourist hotel.” They even offered a hotel recommendation!

Such rapid owner compliance with any new land use measure is rare. San Francisco is still trying to get owners to comply with owner move in eviction laws, 37 years after their initial passage.

Last week, Peskin and Jane Kim introduced legislation to again strengthen enforcement. Their measure  cleverly removes incentives for owners issuing OMI notices to pay tenants for waiving the owners legal obligation to occupy the unit. It does so by imposing vacancy control on the units, which prevents owners from using OMI evictions to get higher rents. These “buyouts” put more money in the pockets of tenants and their attorneys but they encourage sham OMI evictions.

When the city strengthened the SRO law in 1990, the new law was widely ignored. Fortunately, the revamped law gave nonprofit organizations like the Tenderloin Housing Clinic (which I head) the right to sue directly to stop illegal hotel conversions; roughly 25 lawsuits and injunctions later we got the level of SRO compliance that we have already seen without litigation with the new law.

There are four explanations:

First, while SRO owners opposed the law they recognize they must follow it. SRO rents have sufficiently risen (try finding a room without bath for under $1200 per month) that they can do quite well without relying on illegally renting residential rooms to tourists.

Second, Internet advertising is easily detected so owners felt they could easily be found in violation if they promoted weekly rentals.

A third, more cynical but not necessarily less accurate explanation is that the hotel industry plans to sue to overturn the new law and does not want the court to see it was being widely violated. My organization was notified by attorneys for some hotels that they planned to sue, and so rapid compliance could be part of this legal strategy.

The fourth possibility is that the effective date of the law was so close to the start of the May I “summer” tourist season that SRO owners did not want to get a violation for renting weekly that could jeopardize their right to rent 25% of their residential rooms to tourists until September 30 as the law allows. If this is the chief reason, we could expect to see illegal weekly advertising starting October 1.

Big Picture: The Law is Working

In the big picture, several hundred residential SRO rooms have already been returned to residential use.This is great news for those seeking housing in San Francisco who find themselves priced out of apartments.

SRO owners have talked about responding to the law’s passage by operating more like apartments in requiring security deposits and last month’s rent. If the marketplace supports such additional upfront payments, then such changes are fine by me.

San Francisco is a better city when its SRO’s are filled with permanent, longterm tenants. These tenants are driving improvements in the Tenderloin and along Sixth Street,  and are the group most likely to be down at City Hall protecting these neighborhood’s interests.

Randy Shaw is Editor of Beyond Chron. He discusses the battles to preserve SRO’s in The Tenderloin: Sex, Crime and Resistance in the Heart of San Francisco