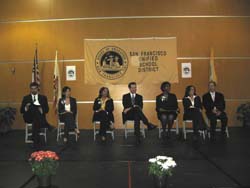 On Friday, January 5, the three newest School Board members — Jane Kim, Hydra Mendoza, and Kim-Shree Maufas — were sworn into office. With this, San Francisco can now look at its public schools with hope that the new leadership will blow new life into the old challenges of public education. The first School Board meeting is tonight at 7:00 pm at 555 Franklin St, and can be heard live on 91.7 FM. The three new Commissioners share notable similarities in their roots and hearts in the community. All three have their roots in grassroots organizing for school communities.

This is in sharp contrast to the fledgling politicians who usually use the public schools as a launching pad for higher office. Two are mothers (Maufas and Mendoza) while the third (Kim) is a youth organizer. This intimate familiarity with the schools is cause to believe that actions taken by this new board will be a breath of fresh air after years of political debates dominated by the personality of former Superintendent Arleen Ackerman.

There is a new political dynamic within the San Francisco Unified School District (SFUSD) as well. With the first ever truly progressive School Board, there will be a new leadership eager to show its ability to lead and govern after years in the minority. A profusion of initiatives, ideas, and perspectives are expected from the new leadership.

The hope and expectation is that with the new collection of talent, key issues will be dealt with an unprecedented vigor. Included are student assignment, fiscal oversight, open government, desegregation, the superintendent search, and student enrollment.

There are expectations that the new leadership shall address such issues in an unprecedented fashion.

The new progressive majority is expected to elect teacher and Green Party member Mark Sanchez to the Presidency after 6 years on the Board, with possibly Kim or Maufas as Vice-President. Long an advocate for a more inclusive, community-driven decision making process, Sanchez is expected to turn those ideals into active government practice. With the three new Commissioners all sharing roots as activist themselves, and long time ally Eric Mar still at his side, Sanchez should experience no opposition in pursuing these new directions.

Though seen politically detached from the new majority, multiple sources within the SFUSD expect for new Commissioner Mendoza to work collaboratively with Sanchez, rather than taking an obstructionist’s path. Whether or not Mendoza, who works for Mayor Gavin Newsom as his education liaison, can hold independent positions without incurring Newsom’s wrath remains to be seen.

The hope is that the days of political wrangling over our students’ lives are over and that the current pool of talent is firmly committed to saving the public schools from becoming fiscally and academically disastrous. In the past, the hostile political environment is often attributed to Ackerman’s top-down leadership. Many feel that Sanchez’s biggest opponents on the board—Commissioner Jill Wynns—will have more liberty to suggest initiatives for our students’ benefit, rather that spending a majority of her time defending an embattled executive.

What solutions can be found for the great multitude of challenges faced by the SFUSD remains to be seen. What we can count on is a collection of public servants who cut their teeth as advocates demanding inclusion, competence, and determination for improving the lives of children from every corner of the city.

At least, it is a start.

Peter Lauterborn served as a member of the San Francisco Youth Commission from 2003-2005, and served as Government Affairs Officer. Contact him at plauterborn@gmail.com