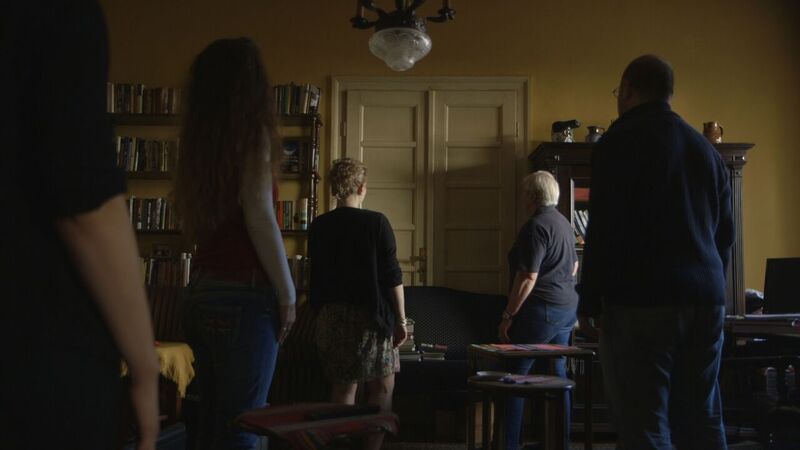 Coralie Fargeat’s very bloody and karmically entertaining “Revenge” may lack the visceral punch of the grindhouse films that inspires it.  But having female empowerment which doesn’t succumb to the male gaze outweighs this cavil.

Wealthy and married Richard has taken mistress Jen to his desert hideaway for a carnal weekend.  However, when Richard’s hunting buddies and business partners Stan and Dmitri arrive a little too early, the weekend turns awkward.  Things soon turn awful, with Jen eventually getting raped and left for dead in the desert.  Jen’s amazing survival doesn’t obscure the truth that escaping the desert alive means permanently taking down Richard and his buddies.

Fargeat proves less interested in pulling the expected rape/revenge story levers than in telling this familiar story in a way she’d want to watch.  Jen’s flirty sexuality doesn’t spark her rape.  Rather, the violation happens because the rapist refuses to respect her boundaries.  Close-ups of a character doing a cow-like munching of a snack further renders the rape grotesque instead of alluring.  Even when Jen spends the rest of the film essentially running around barefoot and in her underwear, Fargeat’s camera never tries undressing her with its stare.  It’s as if the camera allies itself with the film’s heroine reclaiming her own agency.

Jen’s revenge is more than just a protracted game of killing off three wealthy low-lifes.  Karma shaped by Richard’s, Stan’s, and Dmitri’s wrongs against Jen reflect the ways in which they eventually get slain by her.  It also helps that Fargeat employs different storytelling styles ranging from visceral desperation to Looney Tunes-like pursuit to capture Jen’s killings.

Two particular wince-inducing injuries prove less upsetting than expected thanks to far from seamless practical effects work.  However, the models work well enough to evoke screams of horrified disgust and gasps at the right moment.  Some viewers of “Revenge” may emerge from the film wincing at the sight of a 40-ounce beer can.

“Revenge”’s setting and the amount of blood spilled in this film could easily have justified calling Fargeat’s film “Red Desert.”  However, the outraged shade of Michelangelo Antonioni would probably have some unamused thoughts about the idea.

David Sington and Heather Walsh’s somewhat uplifting documentary “Mercury 13” is remarkably free of rancor given its subject matter.  It rescues a forgotten tale of 20th century women’s history and re-kindles an inspiration generally buried by sociopolitical sexism of that period.

From a technical standpoint, including women as part of the astronaut pool made perfect sense.  Calculating a space rocket’s fuel needs depended on figuring out how much weight was being launched into orbit.  Since women generally weighed less than men, the same amount of fuel to put one man into space could both put one woman into space and allow more Moon rocks to be brought back to Earth.  Also, sensory deprivation leading to hallucinations was one of space flight’s biggest problems.  Male astronauts started hallucinating after three-and-a-half hours.  One Mercury 13 candidate lasted nine hours.

Showing how these female pilots were found for the Mercury 13 project will surprise the average viewer.  Women did fly combat-worthy aircraft during World War Two.  WASP program pilots may not have seen combat, but they provided the practical answer to getting newly built military aircraft from the factory to a deployment point.  After WWII ended, many of these women weren’t willing to give up the sky’s freedom.  The Powderpuff Derby kept their skills up while the Ninety-Nines provided both networking and socializing opportunities.

One of Dr. Lovelace’s children complains in the film about how personality-wise, the male Mercury astronauts were cookie-cutter duplicates.  Yet Sington and Walsh don’t quite succeed in distinguishing the personalities of the Mercury 13 candidates seen in the film from their male counterparts.  There is the aforementioned talk of enjoying the sensory deprivation tank as well as the challenges of learning to fly a helicopter despite male hazing.  But the film’s central interviewees never truly come individually alive.

Even if the Mercury 13 women displayed charismatic personalities, it’s doubtful they could have overcome NASA leadership’s ingrained sexism.  The Russians’ making Valentina Tereshkova the first woman in space certainly didn’t prompt a re-think on the part of America’s space agency.

To give NASA some due, the agency’s attitude about female astronauts wasn’t exactly an outlier.   Female pilots used in advertising a new plane had to wear dresses and high heels despite the real-life impracticality of such clothing.  Fans of the film “Hidden Figures” will be disappointed to learn even John Glenn publicly dismissed the idea of female American astronauts.

Despite being personally denied the stars, the Mercury 13 women presented by Sington and Walsh are not consumed by bitterness.  Tereshkova’s nationality didn’t stop them from cheering her achievement as a step forward for womankind.  More importantly, Col. Eileen Collins, the first woman to pilot an American space mission, publicly credited the Mercury 13 women for inspiring her to pursue a career in space.  Collins’ acknowledgment provided the best response to those who prefer seeing a woman’s achievement in a male-dominated field be forgotten by time.

Mila Turajlic’s documentary “The Other Side Of Everything” delivers a satisfying blend of family history and political commentary.  For Western viewers unfamiliar with Yugoslavia’s political troubles, particularly during the reign of dictator Slobodan Milosevic, the film illuminates through one unique woman the hope and heartbreak of many hard years.

The film’s central subject is the filmmaker’s mother Srbijanka Turajlic.  She lives in the film’s central setting, two rooms of the Turajlic family apartment.  This formerly luxurious living space is across the street from an embassy.  It used to access a little observation tower that allowed prolonged gazing over Belgrade’s skyline.  Once the post-World War II Communist takeover happened, portions of the Turajlic apartment were sealed off to provide housing to two poorer families.  Srbijanka’s political activities or government spying opportunities had of course nothing to do with this government re-allocation (cough, cough).

Part of the film deals with Srbijanka’s activism and the often hard times that impelled her to speak out.  The older woman is an affectionately curmudgeonly guide, as evidenced by her threatening to figuratively kill her daughter if Mila’s film didn’t capture the hard work she put into polishing the family silver.   In one amusingly rueful anecdote, Srbijanka recalls how her father felt that his daughter’s willingness to publicly speak out against the government meant that she shouldn’t become a lawyer like her forebears.  Doing so would lead to difficulty maintaining employment.  Ironically, Srbijanka got fired for her activism while she was employed as a university math professor.

The activism in question, Srbijanka’s public involvement with the civil protest/political watchdog group Otpor!, came about from moral obligation.  She felt it her duty as a professor to stand with the students protesting the corruption of Milosevic and his allies.   Film clips of Srbijanka speaking at public rallies show a woman whose rhetorical style mixed common sense with a passion for a more democratic Serbia.

The filmmaker’s mother’s activism was all the more remarkable given the personal social disincentives to challenge the government.  Neighbors in the apartment across from the Turajlic family’s place could look through the peephole and see which possible activists visited Srbijanka.  The smell of cooking from the government-commandeered rooms reminded the Turajlics how little personal privacy they had.

Given all the years of political activism and hardship suffered by the Turajlics, it’s depressing to learn mother and daughter have a pessimistic political legacy.  Srbijanka considers her years in and out of government a disappointing failure.  The filmmaker lacks the desire to take up her mother’s activist mantle.  She feels years of Serbian political ferment didn’t lead in the end to positive change.

Yet fighting for any political change will always be a personal craps shoot.  Winning or failing whether in power or not is part of the process’ DNA.  The big question is whether a person can live with the consequences of allowing a status quo they may not personally like to exist unopposed.  Not everyone burns with the activist’s fire.  But surely there’s nothing wrong with encouraging those who do want to push for a better political existence.

The Turajlics do eventually open the decades-old locked doors to the commandeered rooms.  Yet the reunification can hardly be called exhilarating.  That event and Srbijanka’s public scapegoating by neo-Nazis makes Serbia’s future politics worrisome.

The new John Woo actioner “Manhunt” will never be mistaken for top shelf Woo classics such as “Hard-Boiled” or “Face/Off.”  It uses an archetypal noir plot.  A couple of action sequences offer callbacks to the Woo films “A Better Tomorrow” and the aforementioned “Hard-Boiled.”  Yet “Manhunt”’s familiar elements are not hand-waved away as being unique.  Instead, the cinematic results feel more like a jazzy elaboration on a familiar Great American Songbook standard.

The noir plot in question is “innocent guy on the run for a crime he didn’t commit.”  “Manhunt”’s innocent guy is skilled pharmaceutical law lawyer Du Qiu.  His Inspector Gerard is the unconventional but relentless Inspector Yamura.

The fun begins with its evocation of the old China-Japan rivalry through the differing nationalities of its two lead male characters.  Having the chase set in modern-day Japan allows for the guilty pleasure of seeing parts of this proverbially neat country get spectacularly trashed.

Woo film bromance fans need to wait a bit longer to see Du and Yamura’s antagonism transform from bad romance into brotherhood.  Both men talk to each other in English, a language which is glaringly not their primary tongue.  While each man may understand the other’s words, their true feelings are more accurately conveyed by the frequent punches they throw at each other.  Classic noir cliché lines like “I don’t trust cops” thus sound unintentionally funny.

Both Du and Yamura (and, to a lesser extent female assassins Rain and Dawn) have small details that make them more than their archetypes.  Du’s aggressive work for the Tenjin pharmaceutical conglomerate may have resulted in the death of a woman’s fiancée.  Yamura’s sometimes reckless police work edges a bit too close to self-destructiveness.

In a nice change, there are twice as many female characters with speaking roles than seen in the usual Woo film.  Besides Rain and Dawn, who do the bulk of the shooting on the female side, there’s the aforementioned ex-fiancee Mayumi as well as Yamura’s naïve assistant Hyakuta.  The latter doesn’t shoot anything, but she stands up to dirty cop Inspector Asano’s bullying.

Despite its use of refried action sequences from better Woo films past, does “Manhunt” still deliver the requisite amount of thrill power?  The answer is a generally satisfied “yes.”  Plot logic and  ten thousand bullet gunfights may be absent from Woo’s film.  But there are hairbreadth chases, a spectacular motorcyclist assassin attack on a home, and a Hulking-out finale.  In addition, Big Pharma boosters will ultimately not be fans of Woo’s film.

“Manhunt” lets Woo fans see the director return to action film basics.  If Woo doesn’t take viewers to new action territory, its fist-fight among panicked birds and samurai sword slicing reminds them what they like about the director’s work.