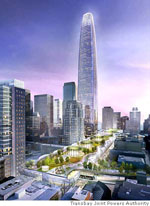 A new report by the Youth Media Council has found that during February, March and April 30, 2007, the San Francisco Chronicle ran four times as many stories about Paris Hilton and Nicole Richie than about African-Americans leaving San Francisco. The report also found that the Chronicle rarely featured stories on gentrification or displacement, and when development issues were discussed, corporate solutions took precedence over community strategies. While the study’s conclusions do not come as a surprise, its statistical analysis of Chronicle news stories shows that the paper’s promotion of corporate solutions to urban problems transcends the editorial page, and is more deeply rooted than many might suspect.

The San Francisco Chronicle’s pro-gentrification agenda is certainly not news. But in its newly issued report, Displacing the Dream, the Youth Media Council (YMC) shows that the paper’s framing of news stories is even worse, and more pernicious, than many realize.

During its three-month study, the YMC report found that Chronicle stories about problems in the housing market (foreclosures and the housing “bubble”) exceeded stories on displacement, homelessness and school closures by more than 3-1.

And what is particularly noteworthy about this finding is that according to the October 27 Chronicle, there have relatively few foreclosures in San Francisco while the vast majority of the region’s problems are in Contra Costa County.

In other words, the Chronicle has devoted far more coverage to a housing problem primarily outside its readership base than to those issues directly impacting its circulation area. And as Beyond Chron pointed out in September, tales of foreclosure victims vastly outnumber the far more common story of San Franciscans suffering hardship and displacement due to rising rents.

Of the 334 Chronicle stories about development or the housing market, less than 1% mentioned displacement connected to development as a problem. And in the 60% of stories when solutions to housing market or development problems were identified, Chronicle reporters overwhelming favored those that were corporate-controlled.

The YMC report makes clear that the Chronicle’s pro-gentrification, pro-downtown agenda goes far beyond the type of stories it chooses to cover. Even when a story does discuss the human impact of the region’s housing affordability crisis, the Chronicle tends to limit its scope to the individual facts rather than place the event in a broader context.

YMC found that 60% of Chronicle stories on housing market problems failed to identify any root causes. Statistics and trends are routinely ignored, so that readers would have no way of extrapolating from coverage of the particular individual’s problem that they are part of a larger and more systemic crisis.

For example, I have repeatedly reported on the Chronicle’s failure to blame federal budget cuts since 1981 for the city’s and nation’s homeless problem. The paper has written about the life stories of homeless individuals, discussed various local solutions, but almost entirely ignored the inadequate federal funding that is the root cause.

Although even strong proponents of development often acknowledge the potential impacts of gentrification and displacement, the Chronicle seems afraid to even mention the latter two problems. YMC found that while the word “development” appeared 424 times in the three-month period studied, the words “displacement” and “gentrification” were mentioned only 14 and 11 times respectively.

Also virtually absent were stories addressing race. In the less than 15% of stories where race is even mentioned, only 6% connected race to displacement. Although San Francisco’s political leadership has openly bemoaned the steady exodus of African-Americans from the city, this trend is isolated from decisions related to development.

The Chronicle also fails to provide a neighborhood context for its land use stories. YMC
found that 63% of stories addressing housing, development or gentrification “failed to mention a specific Bay Area neighborhood.” Bayview-Hunters Point was the community most mentioned, while other areas facing gentrification pressures—such as West Oakland, SOMA and the Mission—were rarely or never mentioned.

This lack of neighborhood focus reflects an inexplicable marketing decision in addition to the paper’s pro-gentrification agenda. The Internet has led many newspapers to beef up their neighborhood coverage, as neighborhood news is not available on the national on-line news sources that have hurt daily newspaper circulation.

When the Hearst Corporation ran the Examiner, it saw neighborhood coverage as a good way to get people to buy papers; now it ignores such stories, and favors lengthy features on decades-old murder cases and other topics that further the paper’s circulation decline.

YMC’s report offers ten suggestions to improve Chronicle coverage of housing and development issues, many of which focus on the need for greater input from community representatives in covering stories. But if my own experience is typical, many current Chronicle reporters lack the community connections of their predecessors, the latter of whom worked for years on the same beat.

For example, in 2004 and 2005, Kevin Fagan was the Chronicle’s chief reporter on homelessness. Fagan was a more knowledgeable reporter when he left the beat for a Stanford fellowship than he was when he began, and one would think that he would bring this expertise with him when he returned to the paper this year.

But rather than have a reporter with community contacts and a deep knowledge base cover one of San Francisco’s most pressing stories, the Chronicle has assigned Fagan to cover local fires. This is the type of assignment traditionally given to new reporters, and means that the Chronicle reporter with the most background in homelessness is not writing about it.

Instead, former sportswriter and East Bay columnist Chuck Nevius has become the Chronicle’s lead reporter on homelessness. And while Nevius has admitted his lack of background in the field, this has not prevented him from writing pieces that completely misstate the history of San Francisco’s homeless problem.

Unlike Fagan, Nevius did not check with community people before writing his stories, because he had no relationship with them. Even a Chronicle reporter that wants community input on stories may not know who to talk to, and this problem only gets worse as veteran journalists accept buyouts to leave and the space for news stories shrinks (consider how the Sunday Chronicle’s Bay Area section is now primarily comprised not of news stories, but of obituaries).

The Youth Media Council story will soon be available on line, and we will link to it when that occurs.