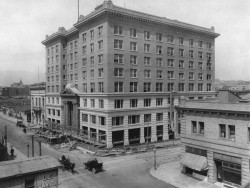 In July 2006, I wrote “Reassessing San Francisco’s Tenderloin,” which highlighted how the loss of businesses on Golden Gate Avenue contributed to the Tenderloin’s decline. Today, new projects on Golden Gate are a sign of the neighborhood’s revival. The most compelling project is the historic restoration of the Central YMCA, one of the city’s great buildings. President Taft attended its groundbreaking in 1909, and it includes an historic theater and grand staircase within its walls. Other new projects include the soon to be occupied SFPUC building at Polk and Golden Gate, the long delayed 90 unit project at the former KGO site near Hyde, the opening of Philz Coffee at the corner of Larkin, and Maestro restaurant and a café in the former Stars space next to the SFPUC.

Not all news is good – SEIU Local 87 continues to foster crime and trash through its unsupervised commercial parking lot at Turk and Hyde, and blames Mayor Lee and Supervisor Kim for these problems rather than its own irresponsibility. But overall, the Tenderloin is on the rise.

I have been in a lot of great historic buildings, but few reach the majesty of the historically renovated YMCA on Golden Gate. This $95 million project developed by the Tenderloin Neighborhood Development Corporation (TNDC) includes 174 efficiency studio units, a health clinic, an historic auditorium, theater, and gymnasium and much more, and will be completed before the year is out.

The theater is stupendous, and TNDC hopes that theater companies will use the space for ongoing performances. This would really boost positive nighttime activities in the area.

The restored YMCA will galvanize Golden Gate and Leavenworth, restoring luster to the historic Leavenworth corridor that connects Market Street to the city’s northern neighborhoods. The project helps highlight the Uptown Tenderloin Historic District, and brings badly needed jobs to the community.

One block further down Golden Gate at Jones, Mercy Housing will soon build new senior housing on the current St. Anthony’s Dining Room site. This will revitalize a critical corner that connects at McAllister to the still vacant landmark Hibernia Bank.

Across the street from the YMCA, a 90-unit apartment building will finally start construction at the former site of KGO. This site has remained vacant for over two decades. The Philz site under the Hastings Parking Garage returns commercial activity to a stretch of Golden Gate that has been largely absent since Hastings destroyed buildings on the site after the 1989 earthquake.

The SFPUC building opens this summer and will bring thousands of employees to the area. Many will eat lunch and some will have dinner and drinks in nearby Tenderloin establishments. Twitter has not yet moved into its new SF Mart location, so the impact of its employees patronizing Tenderloin businesses has yet to be felt.

According to Chef Neil Marquis, the Maestro Restaurant located in the long vacant restaurant space next to the SFPUC on Golden Gate will open in February. Once the city’s hottest dining spot when Jeremiah Tower ran Stars, the restaurant will be accompanied by an adjacent dessert café; that should prove popular with the Fashion School students now at the Academy of Art building on Turk and Polk.

So Golden Gate Avenue alone will see two major new buildings completed, two under construction, and two important new businesses opening in 2012. And that’s not all for the Tenderloin this year.

The revitalization of Golden Gate Avenue along with the renovation of 50 UN Plaza along McAllister Street (bringing hundreds more employees to the area) improves the Tenderloin’s southern border. Its western border along Larkin includes the successful restaurants of Little Saigon, and its northern border on Geary includes some of the city’s most popular bars. Piano Fight will soon start construction of new theaters and bars in the former Original Joe’s on Taylor near Eddy, an area which is already benefiting from the 2011 opening of Ahn Sushi & Soju and its adjacent karaoke bar.

But improving the Tenderloin’s borders still leaves the troubled central area, where there are fewer retail businesses (many SRO’s and apartments were built without ground floor retail) and a greater need for revitalization. Three projects are in the works.

First, Mercy Housing is completely upgrading the historic Arlington Hotel at Ellis and Leavenworth. A high quality restaurant is planned under the Arlington at the corner of Leavenworth, and other retail spaces will bring in tenants that will help Ellis Street businesses.

Second, our plans to open the Uptown Tenderloin Museum at Eddy and Leavenworth are continuing, with architectural plans and design development already completed. We are hoping to raise the necessary funds to start construction this year. The Museum will bring visitors into the core of the Tenderloin who will then patronize neighboring cafes and restaurants; it will also include a regular schedule of evening activities from music to dancing to lectures to gambling nights that will increase positive street activity at night.

Third, the CPMC development project is likely to be approved in 2012, bringing millions of dollars in street lighting and pedestrian improvements to the central Tenderloin. The Tenderloin has been shortchanged on city street lighting for decades, and the neighborhood could get 135 new pedestrian lights along with corner bulbs and improved streetscapes as part of the CPMC agreement.

All this good news has not changed two longtime trouble spots: the first block of Turk Street, and the parking lot at Turk and Hyde.

My organization, the Tenderloin Housing Clinic, has invested considerable time and money in recent months on improving the first block of Turk, and crime is down 25% and violent crime down 36% from May to November 2011. But this progress would not be recognized if you walk down the street.

We have ongoing meetings with every component of law enforcement, and the Tenderloin Police are totally committed to addressing the street’s problems. But the failure of the approved City Place shopping center on Market to move forward was a setback, and the entire south side of the first block of Turk is entirely abandoned. A hedge fund now controls both sites.

SEIU Local 87 continues to cost taxpayers tens of thousands of dollars each year in police and DPW services due to its unsupervised open-air commercial parking lot at Turk and Hyde. A variety of union officials over two decades have pledged to develop the lot, but no action has followed.

I spent several months in 2011 working with Local 87 officials to reduce problems on their site, but was ultimately rebuffed. Union officials deny any responsibility for owning a lot whose adjacent sidewalk provides a business place for drug dealers and requires DPW to send at least one truck every morning to pick up accumulated trash.

Although property owners are responsible for activities on the sidewalk in front of their property, union officials refuse to staff their lot. They told me they blame District 6 Supervisor Jane Kim and Mayor Ed Lee for the drug dealing adjacent to their lot, and suggested I pressure these officials and leave Local 87 alone.

I guess when these union officials talk about solidarity, they don’t include the many Tenderloin children who must walk by their public nuisance. Local 87’s open-air lot is across the street from a corner city owned “tot lot,” and down the street from the Tenderloin Community School.