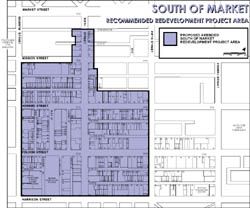 The controversial Plaza Hotel Project on Sixth Street took on a new twist last week when the Redevelopment Agency informed members of the South of Market Project Area Committee (PAC) that the hotel will assist some of the city’s most at-risk residents, including the severely mentally ill, sex offenders and drug abusers. The PAC, an elected body that supposedly ensures neighborhood control over the redevelopment process, was not offered any say in the matter. Widespread opposition to the plan exists on the PAC, which has some angry members questioning the city’s committement to neighborhood input.

The Plaza Hotel has long been a contentious location in San Francisco politics. Back in 2002, Chris Daly threatened to wrest control of the Redevelopment Agency (RDA) after they twice shot down proposals by non-profit developer TODCO to rebuild the Plaza Hotel. After a series of public protests and battles at City Hall, the Plaza project finally earned approval, but only after the Redevelopment Agency decided to rebuild the hotel instead of TODCO. The new plan included promises to continue housing low-income tenants and a Philipino theatre company titled Bindlestiff after the project was completed.

The South of Market PAC, which primarily oversees development on Sixth Street, voted to allow the development to proceed. The plan they saw called for the Plaza to include affordable housing with some supportive services. It did not, according to some members of the PAC, allow for the type of housing now being proposed by the City.

PAC members claim the opposition to the new plan for the Plaza does not represent ill will towards housing for the City’s at-risk residents. Instead, they say opposition stems from their belief that the plan represents another attempt by city officials to dump all of their problems in one small area.

“One of the major concerns the PAC has voiced over the years is that this type of housing should be spread out to other parts of the town,” said Henry Karnilowicz, a member of the PAC. “Sixth Street should not be used as the scapegoat of the city any longer. This situation with the Plaza hotel is counterproductive to what we’ve all agreed on for the area.”

Despite this opposition, members of the PAC feel they have no ability to stop the city’s proposal for the Plaza. They claim that the Redevelopment Agency already rubbers-stamped the proposal without allowing the citizen-elected PAC a say in the matter.

“People on the PAC are up in arms about this,” said Angus McCarthy. “We feel like we have no control, like we’re just an advisory board that stands around. They get our support when they can, but whey they can’t, they just move on anyway.”

However, Olson Lee, Deputy Executive Director of Housing for the Redevelopment Agency, claims that the new plan for the Plaza does not require a vote by the PAC. Lee says the proposed supportive housing falls in line with the original proposal for the hotel, which simply called for a certain number of affordable units, a number the new plan will still provide.

The question remains, however, why the PAC has no ability to approve or deny the new plan forwarded by the City, no matter how minor the difference from the old one. PAC members must attend countless meetings to decide on the details of most developments, with proposals winding their way through sub-committee, committee, and finally the full PAC. Why have such a process, wasting a tremendous amount of time and convincing everyone of official neighborhood involvement in the area, if the PAC has no teeth?

The Board of Supervisors should work to make sure PACs must approve the details of a project before it goes before the Redevelopment Commission. The city should not be able to circumvent processes when it wants a certain type of project built, but be strict about the process when it has no interest in the outcome. This type of behavior fosters exactly the type of image of city government that keeps people from getting involved in the political process – the image of a representative body that does not truly consider their constituency’s interests.