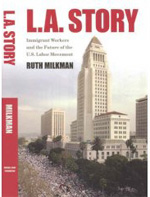 As unions prove increasingly successful in organizing Latino immigrants in Los Angeles and elsewhere, many wonder how this development came about. Fortunately, Ruth Milkman, Director of the Institute of Industrial Relations at UCLA and a frequent writer on labor issues, has come out with a new book that not only provides rare insights into the rise of labor power in Los Angeles, but in some cases completely alters one’s prevailing understanding of labor history. Milkman describes how unions formerly associated with the conservative American Federation of Labor (AFL) have become the visionary unions of today, and debunks the myth that labor organizing campaigns should always be initiated by the rank and file. She also examines four Los Angeles union immigrant organizing drives in order to identify why two succeeded and two failed. L.A. Story is more than a book about Los Angeles; rather, it provides a clear understanding of the challenges and opportunities labor unions face in post-globalization America.

Ruth Milkman’s new book makes three major points, each of which could justify a book-length analysis. The first, and perhaps the most stunning, is that SEIU, UNITEHERE and today’s most visionary unions originated with the elitist and conservative American Federation of Labor. In contrast, the auto, steel, and industrial unions once affiliated with the progressive, grassroots Congress of Industrial Organizations (CIO) are those who have not successfully adapted to the modern era.

Milkman’s point is that because the AFL unions organized by occupation rather than industry, and consciously sought to take wages out of competition, that these unions have been better equipped to succeed in an era where industrial jobs are easily moved overseas. Janitors, hotel workers and carpenters were historically organized by occupation, and these are also the jobs that are immune to relocation. Milkman provides a very interesting capsule history of what was originally called the BSEIU (Building Services Employees International Union) to show how the predominance of AFL unions in Los Angeles paved the way for the city’s recent emergence as a union stronghold.

It is initially hard to accept Milkman’s argument that the American Federation of Labor—that long accepted backwater of “business unionism” associated with Samuel Gompers and George Meany—spawned the most forward-thinking unions in America today. But she makes the case so convincingly that our conventional view of labor history is altered. Similarly, Milkman forces us to accept that the CIO of John L. Lewis, the Flint sit-down strikes, and of left-wing social movement political advocacy has left a legacy of industrial unions that have still not figured out how to build membership in the 21st century.

Milkman could have written an entire book on the transformation of traditional AFL and CIO unions in the modern era, but she instead makes this point to explain why AFL dominance in Los Angeles—which led the city to be a weak labor town for decades—helped foster dramatic union gains in the past decade.

Milkman’s second key point is to debunk the myth that all wisdom resides in the rank and file and that organizing campaigns should not be initiated from the “top-down.” She points to SEIU’s success as the best example of how union leadership should play a critical role in initiating organizing drives and pressuring employers, with active support of workers “from below” also essential.

For example, the most successful immigrant organizing campaigns over the past two decades has been SEIU’s Justice for Janitors. Milkman notes that the leadership of this effort, as well as the financing, came from SEIU’s national headquarters. In fact, many SEIU locals opposed the strategy of organizing immigrant janitors, which led the SEIU International to put these locals into trusteeship. While immigrant workers were central to the “bottom-up” grassroots organizing that has proved essential to Justice for Janitors success, it was top national SEIU officials who conceived of the idea of organizing janitors on an industry-wide, rather than building- by- building, basis.

Milkman addresses critics of SEIU who argue that the union’s staff and officers play too great a role in targeting employers and developing organizing strategies. She argues that this view ignores current political reality, in which “unions can be effective only by combining top-down and bottom-up traditions.” This may be the strongest and most important section of the book, as it confronts a rhetorical analysis of how workers build power that is contrary to both the reality of actual campaigns and common sense.

In her final section, Milkman expands upon the ingredients necessary for successful campaigns by closely examining four Los Angeles campaigns involving immigrant workers during the 1990’s. Her purpose is to identify why two succeeded and why the other two failed.

One of Milkman’s campaigns is the failed effort to organize garment workers working in the 1990’s for the Guess Corporation. I wrote about the Guess campaign in my Reclaiming America: Nike, Clean Air and the New National Activism (UC Press), but with the campaign yet to be declared officially dead, I could not discuss how the union leadership had blown what could have been a landmark victory for Los Angeles garment workers.

Milkman provides all the details, confirming that it was not globalization that prevented the worker’s success, but a leadership that failed to commit the necessary resources to organizing.

Although I can understand why Milkman wanted to lay out the historical and strategic background before applying her analysis to actual campaigns, the last of the book’s four chapters is the most compelling. The longer first chapter provides an historical overview of Los Angeles unions, and establishes her point about the AFL’s “Durable Legacy.” Since this initial chapter does not primarily address either immigrant workers or the future of the labor movement, some readers attracted by both of these issues may find it slow going.

In other words, many readers will find the second half of the book, which deals with immigrant organizing and labor struggles from the 1990’s to the present, more interesting. But I am unaware of any other book that provides a better history of SEIU than Milkman provides in her early chapters, and this background enables us to put the agenda of the current Change to Win unions in their historical context.

It is unusual these days to find a nonfiction book with one memorable new idea, and Milkman’s L.A. Story provides at least three. This is a must-read for anyone concerned with the future of the labor movement, not simply in Los Angeles, but throughout America.