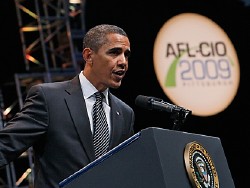 On June 11, St. Joseph’s Health Systems (SJHS) did something that employers have long done but which Barack Obama’s presidency was supposed to stop: it filed a frivolous NLRB appeal to delay unionization for workers who won an election. In this case, SJHS is denying unionization to Santa Rosa Memorial Hospital workers who chose the National Union of Healthcare Workers (NUHW) in the largest successful hospital election of 2009. SJHS’s appeals could keep over 600 workers non-union for another year, an action tantamount to John McCain appealing his defeat in November 2008 and allowing George W. Bush to stay as President through today. President Obama has done nothing to change these undemocratic union election laws, despite committing to do so. AFL-CIO President Richard Trumka should visit workers at Santa Rosa Memorial Hospital and tell Obama that, as the President often puts it, “Now is the time and this is the place” for the President to bring “change” for workers.

In the June 8 Arkansas Senate primary, Obama backed incumbent Blanche Lincoln despite her attacks on labor unions and opposition to union election reforms.

On June 11, SJHS exploited a longstanding loophole in federal labor law by appealing NUHW’s December 2009 election victory to the NLRB in Washington, DC. The law guarantees employers lengthy delays in denying union representation without requiring even the pretense of merit (here, SJHS alleges that the NLRB-prepared election ballot used the wrong font size).

Candidate Barack Obama pledged to end undemocratic union elections, and recommitted to this reform when he spoke at the AFL-CIO Convention in September 2009. But Obama has not even acted to get legislation addressing the loophole introduced.

Now, SJHS gives Obama a convenient poster child for pressing for election reform. And the Santa Rosa outrage gives the AFL-CIO the chance to remind the President and congressional Democrats why — on the 75th anniversary of the National Labor Relations Act — this reform must no longer be deferred.

Operated by the Sisters of St. Joseph’s of Orange, SJHS operates 14 hospitals in three states. SJHS has a long history of violating the rights of workers trying to unionize. It fired workers trying to organize for the ILWU in 2000, used anti-union consultants against the United Steelworkers and California Nurses Association in 2002, and faced a government investigation for its conduct toward workers seeking to organize at Santa Rosa Memorial Hospital.

Unlike the heavily unionized Catholic Healthcare West hospital chain, SJHS has never allowed Catholic teachings on labor to influence its conduct toward its workers. Monsignor John Brenkle of St. Helena Catholic Church has described the “real disconnect” between SJHS’s written “core values” and its actions toward workers.

Brenkle’s feelings are echoed by Fred Ross, Jr., who has seen the worst of employers in a forty year organizing career that began at the UFW and which led him to spend years working to unionize SJHS hospitals. Ross described SJHS’ recent action as “a shameful abuse of power and a travesty of justice.”

SJHS’s anti-union history, and its frivolous appeals designed solely to deny workers their democratic rights — makes it a perfect target.

And such a target is needed to get union election reform back on the front burner. After all, Wall Street and environmental legislation were stymied until Goldman Sachs and BP galvanized public attention. SJHS shares the transparent hypocrisy of the best corporate villains, claiming to support “Dignity, Excellence, Service and Justice” while actively subverting these very ideals in dealing with its workers.

The workers struggle at Santa Rosa Memorial Hospital has strong community backing, and supporters would turn out in force should AFL-CIO President Richard Trumka visit to show support for the workers and call on Obama to revive union election reform.

Such high-profile action would put the pressure squarely on the President to justify his continued inaction. And SJHS’s action prevents Obama from claiming that the current election system is not a problem.

The President says that he’s on labor’s side, and he walked picket lines as a Senator. But he has not lifted a finger to deliver on organized labor’s two top priorities, union election law changes and comprehensive immigration reform. And while health care reform was also a top labor priority, the version passed was not labor’s bill.

The sad truth is that President Obama has done absolutely nothing to prevent employers from delaying and even denying unionization to workers who win elections. If anything, he has empowered employers and anti-reform Democrats to fight to keep the status quo.