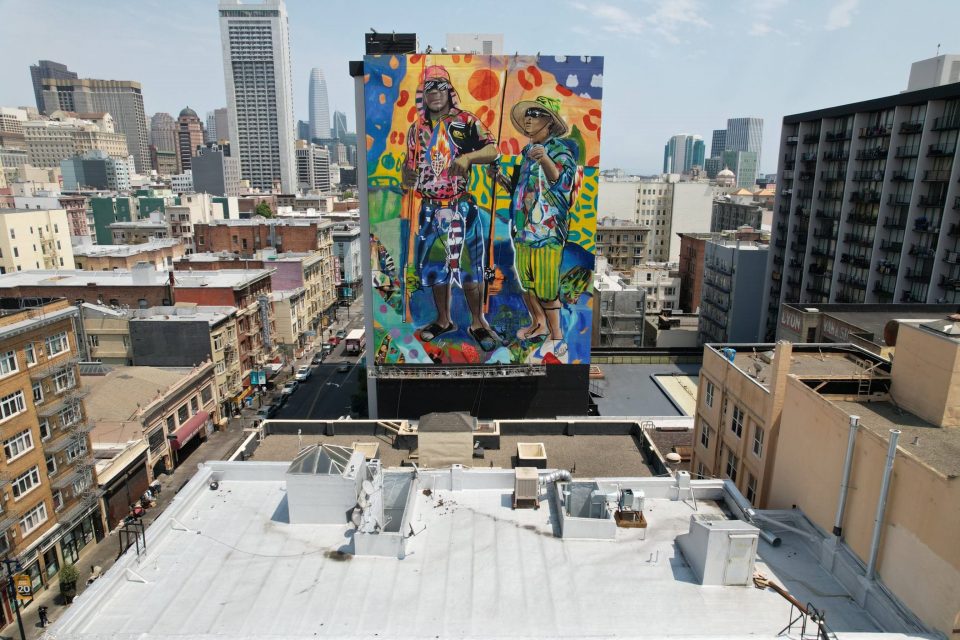 The Tenderloin’s efforts to end open drug dealing has overshadowed a far more positive development:  a growing art scene that has the Tenderloin second only to the Mission in the proliferation of murals.

How did these murals, which include some of the city’s largest, come about? Some of the largest came from a partnership between the Mosser Company (which owns many buildings), the Luggage Store Gallery (a longtime arts organization with a Mid-Market gallery) and the Someland Foundation.

When I began working in the Tenderloin in 1980 I noticed a huge, modern building that stuck out like a sore thumb: the Central Towers Apartments. Central Towers is two 16-story buildings whose units all have balconies—a design that typically borders beaches, not a dense urban neighborhood.

The Tenderloin is primarily comprised of eight-story buildings constructed between 1907-1930. Central Towers did not fit. I later learned it was developed by legendary builder Joseph Eichler. Eichler was a social visionary and “one of the influential advocates of bringing modern architecture from custom residences and large corporate buildings to general public availability.” I could now take pride in Central Towers for allowing the Tenderloin to house Eichler’s last remaining apartment building in San Francisco.

Neveo Mosser entered the Tenderloin in 1990 when his father acquired Central Towers. I got to know him in 1995. He founded a group called Adopt-a-Block to stop drug dealing around Leavenworth and Turk. Adopt-a-Block united residents, owners and merchants in small claims court actions against businesses that were part of the drug trade. When the owner of the building housing the Maryland Market got the small claims actions moved to Piedmont (where he lived) I became the attorney for the claimants in a civil lawsuit.

Thanks to the lawsuit and Mosser’s initiative in founding Adopt a Block,  the Maryland Market has not been a source of drug activities to this day. The suit also largely stopped other markets from becoming dealer havens.

Because the sides of Central Towers are visible for several blocks away, Neveo wanted to get a mural painted. But the logistics were too difficult. We arranged around 15 years ago for the side of the building to be used for a novel lighting project but the company behind this backed out.

Nevio Mosser was born into a family deeply entrenched in art and music. Yet it took the involvement of Avery Mosser, his artistic daughter, to turn the Central Towers from sore thumb to attraction. Avery Mosser told me she “has done art her entire life. After graduating from Brown she worked with artists on advertising campaigns and got connected to the local arts community. She saw the impact that murals made in the Mission and wanted to bring that same positive feeling to the Tenderloin. Avery Mosser sees “any building with a wall as a potential mural site.”

The Luggage Store Gallery (1007 Market and the 509 Ellis Cultural Center Annex) has a long arts history in the Tenderloin. It reaches out to the Mosser Company and other building owners with potential mural sites and connects the artists to projects. The Someland Foundation funds murals. So the three essential parts were in place: a building owner wanting a mural, an arts organization who can find the right artist, and a funding source.

We see the outcome on the two large murals on each side of 455 Eddy Street. One is by Tauba Auerbach, titled “2020.” The once pictured above, “Pesca pesca Redouble la Force” by Erlin Geffrard may be among the city’s most visible.

The Blackhawk and Other Murals

The Tenderloin has many other new murals. On the Coronado Hotel at 373 Ellis (used as permanent supportive housing) is a striking mural by Harumo Sato, titled “We Used to be Held.” The building that once overlooked the Blackhawk Jazz Club at Hyde/Turk now features a mural recalling the jazz spot; I used a nearly completed version of the mural for a recent story.

It would be great for someone to take photos of all the Tenderloin murals and create a link to this art.  But even better is for people to walk the neighborhood and discover the murals in person.

The Tenderloin Museum offers mural tours in addition to their neon sign and historic district tours. So if you want a guide to all these great murals, contact the museum for its schedule. The next mural tour is planned for Saturday February 19th at 1pm. https://www.eventbrite.com/e/murals-of-the-tenderloin-walking-tour-tickets-238766526107