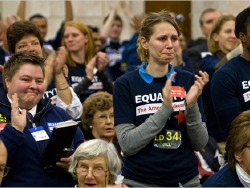 “Tonight, I will be the first Republican legislator in the history of the state of New Jersey to say the following. On the question of marriage equality, I vote yes.” — State Senator Bill Baroni

The New Jersey Senate Judiciary Committee voted 7-6 last night to legalize same-sex marriage – after Garden State Equality brought 1,100 supporters to the State House in Trenton. The Senators heard eight hours of public comment, including a powerful speech by NAACP Chair and civil rights veteran Julian Bond and hours of legal testimony that civil unions are not the same. Unlike last week’s vote in New York –where no Republican crossed party lines – GOP Senator Bill Baroni cast the deciding vote for marriage equality, which prompted a standing ovation from the audience. The bill goes to the Senate floor on Thursday, where it faces an uncertain future.

Senate President Richard Codey told the Newark Star-Ledger last night he is unsure if gay marriage supporters have the votes to prevail. “Advocates feel they’re close and getting closer,” he said Codey. “It’s certainly going to be a fairly close vote.”

But it’s not like we have much a choice. If the Senate fails to pass it before Governor Jon Corzine leaves office, New Jersey will have to wait four years — because Republican Governor-elect Chris Christie has said he would veto such legislation. Garden State Equality has aggressively mobilized the grassroots to lobby swing legislators in their districts – working with activists who cut their teeth in Maine earlier this year, and working out of five offices in the state. And it’s having a slow, but noticeable, effect.

The odds, however, are not in favor of passage. One Republican may have voted “yes” in Committee, but two Democrats – Paul Sarlo and John Girgenti – voted “no.” And will Democrats from communities of color rise above an anti-gay sentiment in their districts? Just like Latino Senators from the Bronx and Queens defeated marriage equality in New York, New Jersey Senator Ron Rice Sr. – an African-American from Newark – opposes the bill and intends to vote “no” when it comes to the floor on Thursday.

But his son, who serves on the Newark City Council, supports marriage equality. One commenter at the Blue Jersey blog (which had up-to-the-minute coverage of last night’s Judiciary Committee) summed it up nicely: “Ron Rice Jr. needs to have a heart to heart with Dad – and if necessary, bring Julian Bond as well.”